How does the tornado chaser locate the spot?

In my opinion, tornado is hard to forecast in three different aspects:

But, I have heard some brave guy(Tornado Chaser) searching for tornado around US. It's really cool to experience the amazing nature as the figure shown. 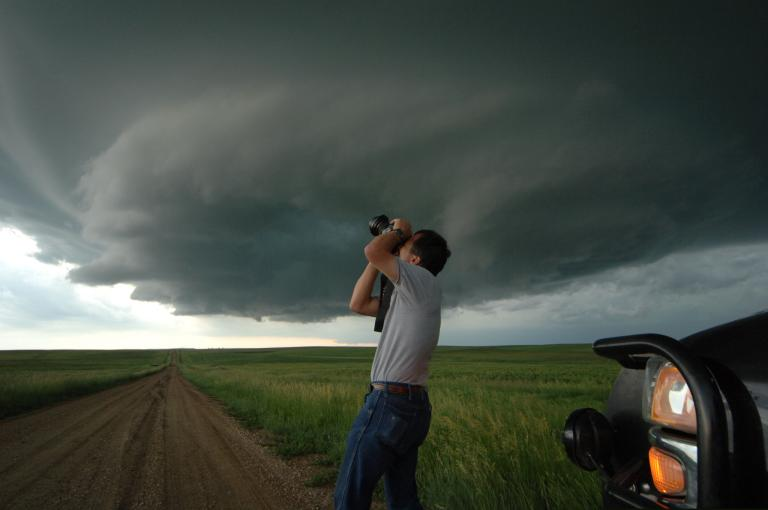 But how did they learned the information of where and when a new tornado would appear ?

It starts by identifying days with good overlay of shear and surface-based instability. In the US we have the Storm Prediction Center that helps indicate such days looking at models. Generally the very earliest signs that get chaser's attention are a reasonable trough moving into regions with adequate moisture and warmth (sometimes a cut-off upper-level low works too).

Then the day before and the morning of the event, final target regions get narrowed down further by looking at visible and water vapor imagery, upper level air maps, and surface weather data. Basically the focus is generally on surface features... fronts, low pressure centers, drylines, and outflow boundaries. Chasers will usually get into that region by early afternoon, as supercells and tornadoes are most common during the late afternoon and evening.

Once in the target zone, chasers keep an eye on any available satellite imagery, surface weather data, and also to the skies, looking for initial storm developments and any adjustments that may need to be made to the target area. In many situations, clouds will start building up and perhaps pulsate in development, giving indication of favored areas long before the cap is broken and they develop into supercells.

Once the storms get going, the interest become identifying the stronger and more isolated storms as they develop rotation, becoming supercells. In the northern hemisphere, the "business area" of a supercell is usually near the southern end, where a supercell will typically start to develop some sort of hooked shape, as all shown in this supercell image: 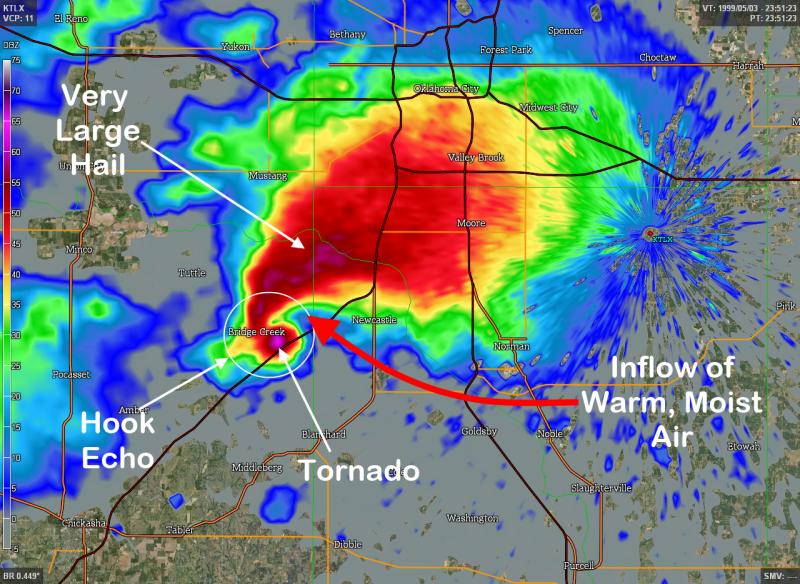 (Source: What is a Supercell Thunderstorm, by Dennis Mersereau, on Vane)

Most (though not all) supercells move approximately northeast. So knowing that, as the day evolves, a typical chaser will make choices to help end up on the south half of the storm so their visibility and path are not blocked by the stronger rain and hail. Then it comes down to road options, and paying attention to the storm and environment around you to watch whether the rotation is tightening up in the cloud base, as well as being aware of the temperature and wind for indications of how the storm may evolve.

When it comes to models, you're right that they absolutely can't identify the tornado. However, convective models (like the HRRR) do often indicate the approximate areas where storms will develop a few hours ahead of time. But it doesn't appear models will be forecasting where tornadoes will form with any great reliability for quite a while still.

But in terms of hunting down tornadic storms, convective models, and for that matter any large deal of real-time data, certainly aren't a necessity. People have been chasing storms quite successfully long before all that was available. It's more reasonable than most realize. You choose the climatologically favorable tornado seasons to start, then seek out favorable areas within the large-scale pattern, and then refine your target by interpreting the conditions until you find yourself magically on the southern end of a hook, even without radar help.

It looks like tornadoes are quite regular occurrences around China. I know of chasers around Europe, Australia, and South America, but am surprised there aren't more in China. Maybe that is soon to change?

15
Does a green or yellow sky actually indicate a tornado?
17
Why does the so called "tornado alley" exist?
8
How does El Niño affect thunderstorm/tornado/CAPE activity in the central United States?
15
How does a 'fire tornado' form?
1
Appearance of Tornado
6
How many buildings in tornado prone-areas have storm shelters?
3
How big was the eye of the El Reno tornado?