I've heard that during the accretion of proto-planets that formed the earth, 60 minerals were created through the reactions of atoms and molecules in the nebula.

Do these first minerals still make up Earth?
Do we have more minerals? If so, how and when were they created?

This is a very interesting topic that in the past several years has reached the spotlight because of the work of Robert Hazen on the concept of "mineral evolution".

Minerals are basically just inorganic compounds: you take several elements, arrange them in certain ways and you get minerals. Thus, the minerals will be mostly determined by what's available to them in term of chemical elements. The solar nebula in Earth's area was composed of very few major elements: Fe, Si, Mg, Al, O, C, etc. There are not many ways you can arrange this limited number of elements, and the mineral diversity was rather small. You cite the number 60. Could be more, could be less, but it sounds about right.

With time, certain processes on Earth (magmatic, metamorphic, metasomatic, hydrothermal, you name it) preferentially move certain elements relative to others. This causes redistribution of elements in space, enriching and depleting certain elements in various areas. Elements that were previously present only in trace amounts and did not form minerals of their own may be concentrated so that they do.

This is a time dependent process, hence the name "mineral evolution". This is a nice figure that sums things up: 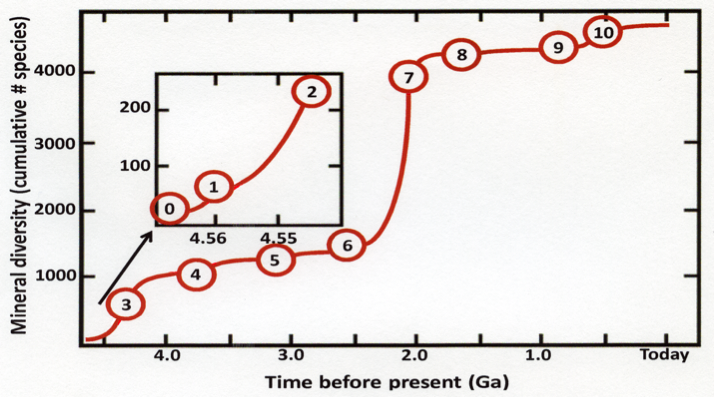 You can read more about it in Hazen's website (from which I took the above figure): http://hazen.carnegiescience.edu/research/mineral-evolution

Be careful though when searching for "mineral evolution" online - you usually get more results of pseudoscientific and creationist websites rather than actual science.

Minerals are naturally occurring chemical compounds composed of elements. Much of these elements were originally deposited with the earth saw formed. However, meteorites and asteroids have carried new mass onto the earth.

Mineral creation is an ongoing process on the earth. So mineral creation is happening today. One example would be volcanic vents at the sea floor creating metal sulfide minerals like ZnS - sphalerite and PbS Galena.

Not the answer you're looking for? Browse other questions tagged geology earth-history minerals planetary-formation or ask your own question.

8
Are there minerals which are not been found on earth but which are still possible to exist?

28
Why is Earth's inner core made of an iron-nickel alloy?
18
Why are minerals found in "large" quantities and not scattered throughout the earth as individual atoms?
12
Did Jupiter really make Earth (in)habitable?
2
Where did the carbon, neon and nitrogen go?
2
How Good is The Evidence For Snowball Earth?