Is ice also created ín cold water of the oceans?

Salt water of the oceans could freeze into ice at a temperature of -1,8C. Now there is a lot ice on the poles but of all the floating ice how much is that a grown in and of the water itself?

With other words, is the current of the ocean waters an obstacle for creating ice or is there a minimum temperature at which water in each case will turn into ice independent of currentstreams and is this temperature reached in the articpoles?

The National Snow and Ice Data Center website describes the process of ice formation on polar oceans. Virtually all of the young ice is made from ocean water which retains some brine in the process of forming. Older ice tends to lose the brine and have it replaced by air bubbles.

Surface ice would form differently, either by frost, which tends to form in patterns or in snow fall. Over many years it might be possible for snowfall and surface forming ice to build up on top of permanent ocean ice. I'm not sure what the ratio could eventually become, but if sea ice was to be mostly from the air, it would need to be very old where over time, enough ice formed on top and the original ice melted from the bottom. On average I suspect most sea ice is ocean ice though, even multi-year ice.

Salt can freeze along with water in ice below -21 °C, but oceans tend to circulate quite efficiently, so -21 °C water is unlikely in oceans.

Snowfall is obviously important for the ice that overlies Greenland and Antarctica; snowfall is the only source for ice on land. On the other hand, most of the ice in the Arctic Ocean and in the seas that surround Antarctica result from the freezing of seawater as opposed to snowfall. Snowfall does of course add a bit, but it is important to keep in mind that much of the Arctic and Antarctic are essentially deserts. There's essentially no water content in the atmosphere when the temperature is forty degrees below zero, even at 100% humidity. On the other hand, that extremely cold air fuels freezing.

Regarding water vapor content, the following figure from Wikipedia Commons may help: 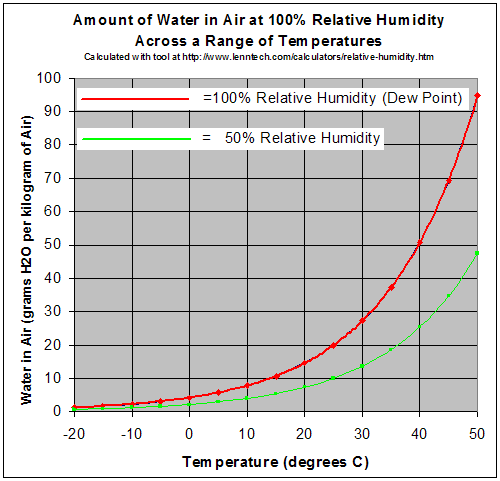 This curve (along with the physics behind it) is one of the key reasons polar regions qualify as "deserts". Polar regions do not and cannot receive much precipitation.

Not the answer you're looking for? Browse other questions tagged ocean water sea-ice or ask your own question.

9
Is the Arctic sea ice volume increasing?
7
How would the Earth look without water in the oceans?
7
Why is the Ocean water on the west Coast so cold comparing to the East coast?
6
Observations of sea ice typology in the Arctic
12
How different is the proportion of heavy water ($\ce{^2H2O}$) in the different oceans?
2
Do ice crystals form in running super-cold water?
4
Desalination and Weather Impact?
11
What is the temperature of the flowing water in icy river?