What is difference between divergent boundary and hot spot? 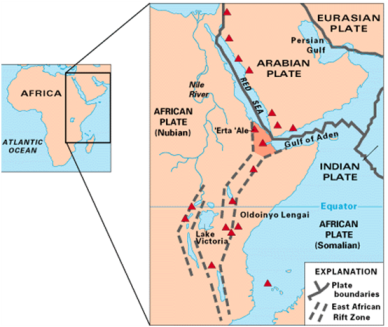 Hot-spots, or mid-plate tectonic activity, occur away from boundaries between plates. A hot-spot is where a plate is moving over a stationary mantle plume. Hot-spots are responsible for island-chains, such as those seen in Hawaii, which form as the plate slides over the plume or even volcanoes on land, like Yellowstone. The islands of Hawaii lie thousands of kilometres away from the boundaries of the Pacific plate on which they sit. A nice feature is that the Hawaiian island chain lies in a north-westerly line that matches the direction the Pacific plate is moving. 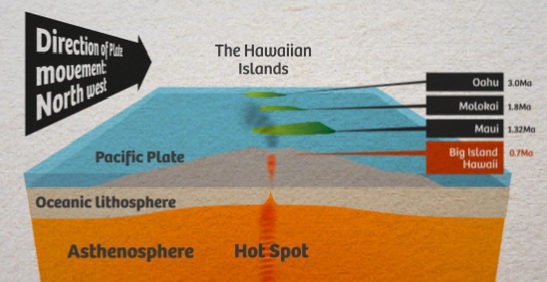 Not the answer you're looking for? Browse other questions tagged geophysics plate-tectonics crust hotspot or ask your own question.

36
Similarities between grand circulation solvers and mantle convection solvers
6
Mars maar craters explosive style formation gravitational effect
1
Transform Boundary and its relation with Earth's rotation
21
Plate Tectonics: Is it possible to have an ocean-continent divergent boundary
1
Divergent boundary and trenches between oceanic plates
5
Number of tectonic plates
6
How can linear oceanic ridges (like the East Pacific Rise) be explained by single point mantle plumes?
6
What is the impact of divergent tectonic plates on old mountain ranges?
4
Why aren't the Hawaiian islands a continuous strip of land?