While researching across the Australian Earthquake Engineering Society archive about Seismology, I came across an earthquake map of the Australian island state of Tasmania (below): 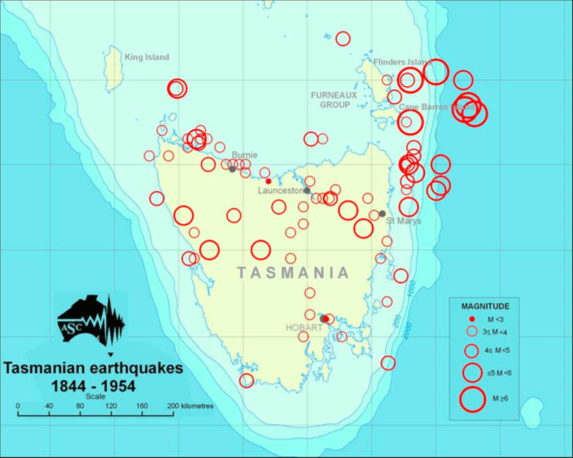 I can't prove it, but I strongly suspect that most, if not all, of the earthquakes in that north-south lineation along the eastern Bass Strait are caused by slumping of sediments in a series of listric faults. That whole continental edge is a very thick heap of deltaic and continental sediments of about Kimmeridgian (late Jurassic)to late Eocene age. There is a brief summary in: Submarine canyons of the continental margin, East Bass Strait (Australia).

As to 'the hook', it is surely no coincidence that this exactly coincides with 'Flinders Canyon', which you can see on Google Earth. What you can't make out on G.E. is the enormous size of the Canyon and its sedimentary catchment area. The sediments here are up to about 3 kilometers thick, and a massive submarine amphitheater funnels sediment into the canyon in periodic surges. I would bet a month's beer money that the 'hook earthquakes' were caused by occasional turbidite collapses of sediment down this steep canyon. The magnitudes, location, slope and approximate frequency are all spot on. If you include the smaller canyons along the same continental edge then it is estimated that some 80,000 to 90,000 cubic kilometers of sediment have collapsed from this continental edge since the Late Eocene, i.e. over the last 40 million years.

Almost all of the earthquakes in that area are associated to an earthquake sequence between 1883-1892 (some are described for example in: Michael-Leiba, 1989). The seismicity did not cease after 1892, the largest recorded earthquake in Tasmania in the 20th century happened in the same region (Michael-Leiba and Jensen, 1993)

If you tinker around with the Geoscience Australia earthquake database no such pattern is visible, the following map shows the 73 earthquakes M>3 around Tasmania which happened between 1955 and today. 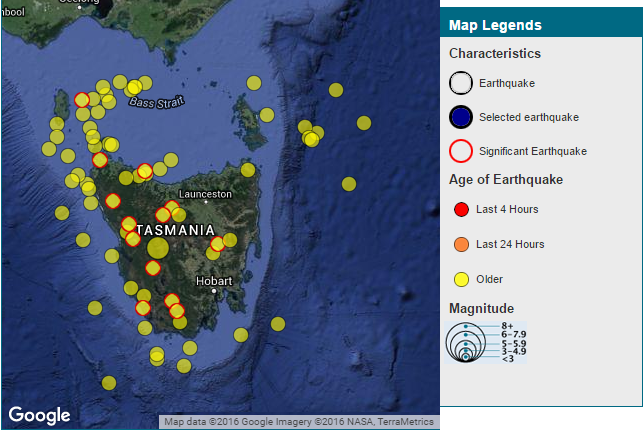