Image cited by both: 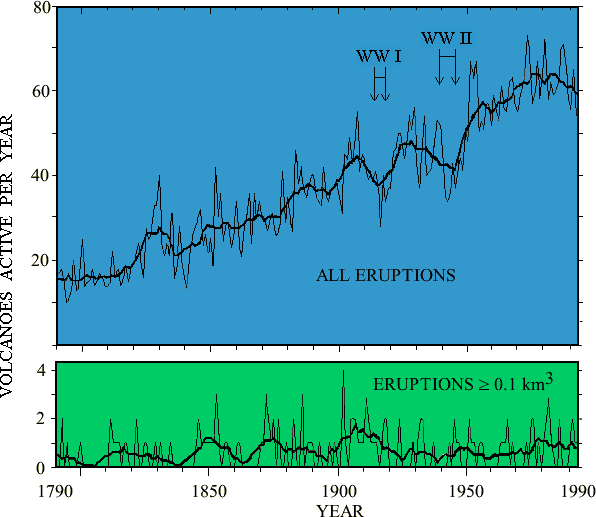 Is this fluctuation or recording increase?

geophysics volcanology geodynamics volcanoes geothermal-heat
Share
Improve this question
edited May 8 '14 at 16:15
Ben A. Noone
asked May 7 '14 at 18:47

This is probably an observational effect that is quite common in the Earth Sciences. In scientifically progressing societies there is a higher proportion of observations due to a number of effects:

This is also why more and more meteorites are observed falling. In the middle ages you were either too busy to care, took it as a wonder, or found a meteorite, but had no ability to write it down. Similar scenario for volcanic eruptions. I could imagine that actually all those ships, airplanes, and oudoor-activities (no offense) lead to more observations of eruptions, but that people were to busy recording and writing them down. The geologists of their time were probably busy finding war-necessary resources.

Whether volcanic activity fluctuates depends rather on the timescales you are looking at. Crisp (1984) compiles available data on igneous activity lasting for longer than 300 years and concludes that over the past 180 million years the annual average magmatic output each year is around 30km3, of which ~75% is produced at mid-ocean ridges.

The most obvious variability in magmatic output arises from flood basalt eruptions, frequently correlated with continental rifting, and suggested to result from the first impact of a new hot upwelling mantle plume. These are enormous events - circa 106km3 of magma emplaced over timescales as short as one million years and always less than 10 million years - and even though they account for >95% of intracontinental volcanism, they account for only circa 5% of the global magmatic output due to their rarity.

As has been mentioned with respect to earthquakes, earthquakes are not increasing in frequency. The key points, as with earthquakes, are improved technology and increased population density. Increased population density results in more events being observed, and individual events having greater negative impact; improvements in technology make it easier to perform remote observation, and to identify remote eruptions in the geological past. In particular, work with Antarctic ice cores (we have records going back 800,000 years at this point, and work is ongoing on a million-year core!) allow identification of discrete eruptions because they deposit layers of fine ash or, from further away, acid-rich layers. These eruptions can be correlated with one another between different cores - and even ice cores taken from different continents - through massive "marker" eruptions, such as Krakatoa, and to some extent through absolute dating via isotope chemistry in air bubbles trapped within the ice. However, even as our ability to interpret ice cores further and further back improves, our estimates of global magmatic activity stay pretty constant: despite being published 30 years ago, Joy Crisp's paper is still considered a decent piece of work worth citing.

ETA I note that the first report you cite, at "iceagenow.com", says about the author:

Felix is not affiliated with any university, scientific establishment, or corporation, and therein lies his strength. Untainted by institutional bias or conventional wisdom this architect turned author brings fresh insight to the study of the ice ages.

I suggest that he is probably less reliable than scientific consensus; peer review has its flaws but does exist for a reason! If you would like a close reading and critique of his report, can you make that clear? Cheers :-)

The previous answers contain important facts, but neglect recent discoveries. As tobias47n9e says, the increase in observed output over time is an observational effect. As kaberett explains, if you're talking about megayear timescales, Large Igneous Provinces will have a large impact on the timeseries. However, LIP and all continental eruptions (~1km^3 / year) are dwarfed by midocean ridge seafloor eruptions (~3km^3 / year).

Volcanologists have made major progress towards answering your question (are production rates trending? periodic?) over the last few years.

The authors attributed these effects to decompression melting. If you remove a weight from above a magma chamber, the pressure in the chamber is reduced, and the melting temperature is lowered, causing an increase in the amount of melt available for eruption. (Personally, I suspect that it's not really decompression melting causing the change in eruption rate but actually just fractures opening and closing.)

The Tolstoy paper claims that if you look at seafloor topography, you see bumps where more lava erupted and piled up higher. Further, it says those bumps correlate with the 100,000 year Milankovitch global climate cycle. So, orbital eccentricity --> sea level --> midocean ridge eruption rate --> seafloor topography. This is a brand new idea and needs much more testing. (Personally, I find the topography thing hard to believe because that topography is probably more fault-controlled than eruption-rate-controlled.)

Tolstoy even claims that low tide causes eruptions! She uses a Schuster test to say that the majority of seafloor eruptions occur during neap tide. However, we don't observe seafloor eruptions very often, so she is making this claim using only 9 data points.

It's currently unknown whether these unloading / loading effects are important at subduction zones or LIP.

You've asked a difficult question which volcanologists have been attempting to understand for decades and will continue to work on for the foreseeable future. In summary, my answer is that cutting-edge research suggests that global eruption rate fluctuates in response to climate via changes in the masses pushing down on magma reservoirs.

I would just like to quickly emphasize the forward-mindedness of lunar and additional celestial mechanics when looking at fluctuations in global eruption rates. Since it isn't just the oceans which ripple in response to the passing over of other bodies, it may be subsumed that there will be some flux in accordance with gravitational tides.

In this case, orbital resonance is likely to emerge as an important consideration for the study of volcanic activity on earth - we already know that volcanic activity elsewhere in the solar system can be demonstrated by this as friction from tidal flexing.

It's reporting bias, and over longer time spans there's a preservation bias as well since a small eruption like Ruapehu 1995-96 will not show up in the fossil record at all after a few hundred years of erosion. These days we watch the world from far more angles with far greater scrutiny than at any stage in the past so we see eruptions that we would never have paid attention to in the past that's all. That's why there are pronounced dips in the graph during the World Wars, volcanoes didn't stop but people were elsewhere with other things on their minds.

When I look at the series of craters which mark the procession of various hotspots, such as yellowstone, their size and output does appear to be increasing. Same with hawaii and madagascar (if you ignore the deccan traps.). Although that might just be because of erosion, i donno.

Not the answer you're looking for? Browse other questions tagged geophysics volcanology geodynamics volcanoes geothermal-heat or ask your own question.

44
Are Richter-magnitude 10 earthquakes possible?
11
Has the number of natural disasters per year increased significantly in the years since human-caused climate change started?