Why is Vladivostock so cold, while Dalian is so warm?

Over at SE History we're pondering the relation of temperature to Russian motives in establishing its Port Arthur colony in the late 1800's.

Wikipedia says that Vladivostok is cold due to the Siberian High. Meanwhile, in my answer, I repeated what I learned decades ago in my high school earth science class about ocean currents and why Port Arthur was warmer. (Port Arthur was located near the modern large city of Dalian)

Another astute SE member in the comments pointed out that trade winds are more responsible than ocean currents for weather effects.

What is the truth for these two places? (Note that we are asking more about Winter than summer, as both places would make fine summertime 19th century ports)

Also, was Vladivostok significantly colder 120 years ago than it is now? 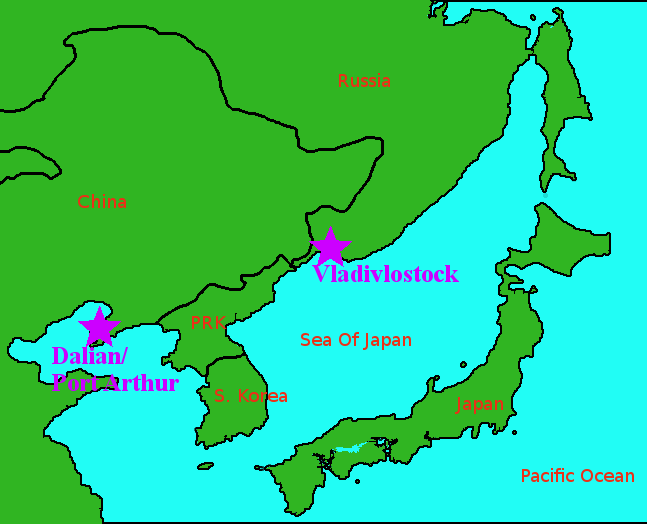 Vladivostok (this is the spelling I've always seen) is located at 43º08' N whereas Dalian lies at 38º05' N. Five degrees make a difference. Also, Vladivostok gets more influence from the cold Oyashio current than does Dalian. For these reasons summers are warmer in Dalian and winters are colder in Vladivostok.

To add to Centaurus's answer, the climate of both cities is strongly influenced by the local sea surface temperatures. Dalian monthly temperatures vary from about -7 to 27 deg C, whereas Vladivostok, less than 500 kilometres further north, varies from -15 to 23 deg C. So the temperature contrast is mainly in winter. During the December-March winter period prevailing cold dry winds from polar areas blow south from Sakhalin Island. There are two consequences, firstly it generates a strong counter-clockwise cold sea current which hugs the eastern coast of Russia. Secondly, there is massive evaporative cooling of the shallow warm surface waters, again, concentrated in winter. This accounts for the cold extremes of Vladivostok (as well as winter snows in Japan).

Dalian is 'warmed' by an offshoot of the Kuroshio current. 'Warmed' being a relative term, since the sea still approaches freezing point in late winter, but it is still warmer than the current near Vladivostok. Also, the Yellow Sea is one of the world's largest areas of continental shelf. That is, relatively shallow, so it warms up more during the summer, and has thermal inertial carry-over into winter.

Not the answer you're looking for? Browse other questions tagged meteorology climate-change ocean-currents or ask your own question.

14
Why don't cold fronts and other steep-gradient weather effects just dissipate?
10
What are the key differences between warm and cold core cyclones?
21
What caused the Younger Dryas cold event?
7
Thermohaline: Why is cold and dense seawater salty when warm water holds more dissolved salts?
2
North Bay of Bengal warm pool anomaly
6
Why is cold air fast in an occluded front, but slow in an anti-cyclone?
4
Why did “Glaciologist Princess Elsa” have to leave the glacier because it was too warm?
4
“steep slope” when cold fronts encounter warm fronts: Confusing sentence in textbook