The motion of tides

I found this animation from a satellite:

which shows the motion and elevation of tides on a certain date. Can you find an animation of a date when there is a spring tide?

my question is as follows:

since the earth moves toward the East, tides should move to the West, but there is only one, at the Antarctica, which goes in that direction and keeps pace with moon, although it never overtakes it, as it was supposed by the theory.

What people at Astronomy could not explain is why most tides move to the (North-) West, and that means they run faster than the earth's rotation. Can you explain that? Higher water is at a greater radius from the center of the Earth and must slow down because of conservation of AM, how can they move faster?

This question is quite interesting because it highlights some of the common misconceptions about tides.

The animation from OSU shows their model results (not from a satellite as you mentioned, but from a model that assimilates satellite data) for the global tides for a day in 2010 a week removed from the full moon. The page can be easily access on the day of a full moon and it will provide you with a comparison from the animation posted with the question.

The two tidal bulges are a simple representation of the effects of the tide generating forces of the Moon on Earth. 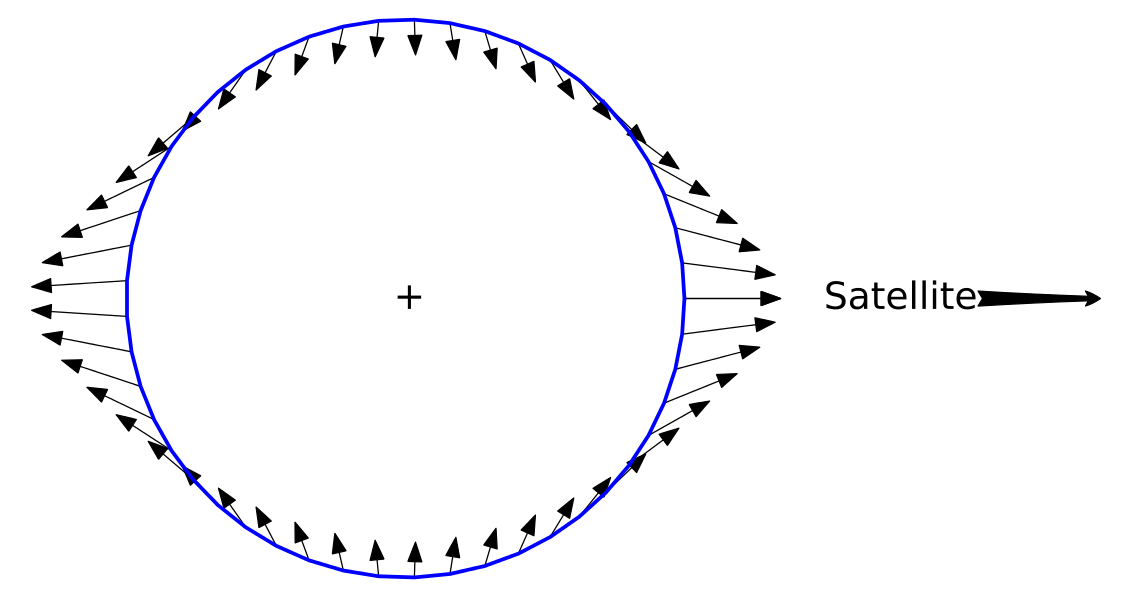 The resulting explanation of the tides is the Equilibrium Theory of the Tides that was first introduced by Newton in the Principia and provided the correct explanation for the tidal force but under the assumption that the planet was covered by a uniform ocean. The equilibrium theory considered the gravitational forces from the Sun and Moon but ignored important effects such as the rotation of Earth and the effects of continents, and could not explain the real ocean tides.

Laplace proposed the Dynamic Theory of the Tides that also considered resonance effects, friction, and the natural periods of the ocean basins on Earth. Laplace's theory was able to predict the tides with relative accuracy and also predicted the occurrence of amphidromic points, where the tide was zero for an specific constituents. The presence of amphidromic points can be easily visualized in the animation provided. 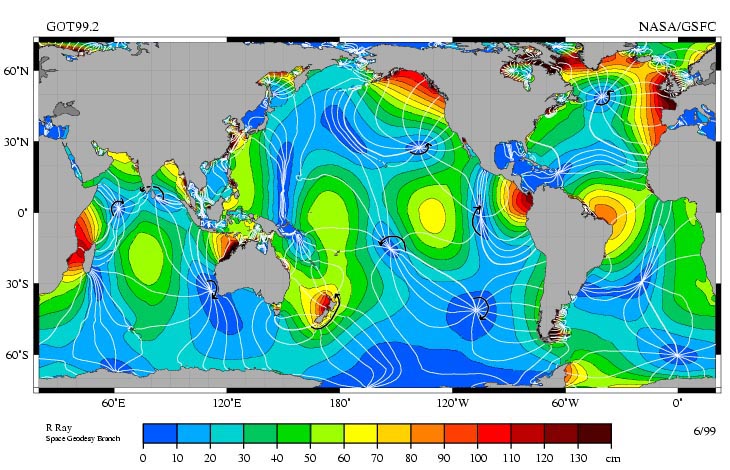 The main constituent of the tide ($M_2$) goes around these amphidromic points and is the main effect that can be observed in the animation. The tides therefore do not move from east to west or the other way around but rather propagate around these amphidromic points. The real tides are thus more complex than the simplify ocean bulge diagram as they are affected by the presence of the continents. The ocean bulges reflect on the shorelines creating resonant motions and standing waves. Standing waves have regions of high amplitude variation (antinodes) and regions of zero amplitude variation (nodes). So, it's not surprising that we see places where the tides are nearly zero in the ocean.

Also, coastal topography can intensify the tidal height fluctuations. In fact, these effects are usually greater than the tidal bulges would be in a stationary Earth-Moon system. While the height of the tide in the equilibrium tidal theory is less than half a meter, the inclusion of the continents and coastal topography results in tides up to 17 meters in some regions.

Going back to "fact" that the "there is not a single moment of the day when there is an elevation ahead of the moon", the difference between the passing of the Moon and the bulges due to frictional effects on Earth is minimal. In fact, the angle is only 3°, so the tides are late by about 12 minutes, which clearly is not something you can visualize in the animation or in the image provided.

15
Why is there a daily inequality for low tides?
3
What would be the impact on tides if the earth had no tilt?
4
How often do king tides (perigean spring tides) occur?
3
Why don't spring tides occur at full/new moon (age of tide)?
6
Why do high tides vary month to month?
10
Is the Earth heated up by the tides?
1
What is the significance of amphidromic points related to tides?
3
"Major Lunar Standstill" causing high tides?
6
Why is the time interval between tides so irregular?