Why is Egypt so dry?

If you look at this wind map (for July, but following the link you can also view other months): 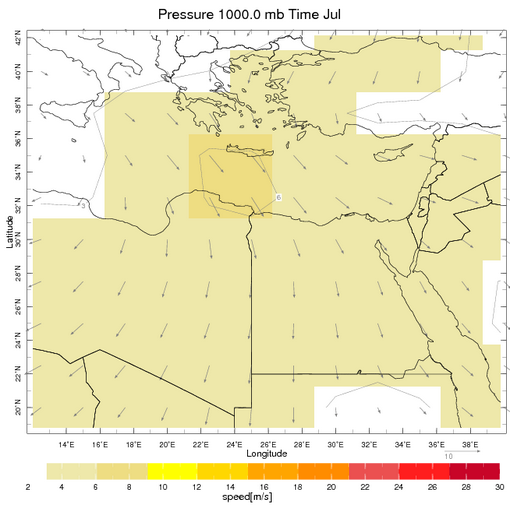 you will see that Egypt gets its air from the Mediterranean sea. During other months it could get less moist air, but still from the same direction.

If you look at the topography of Egypt: 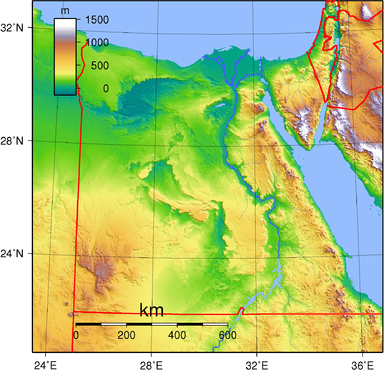 (taken from Wikipedia), you will see that it doesn't have any mountain ranges that could intercept the precipitation. But it still receives very little rain.

I don't quite understand why. Is the Mediterranean air not moist enough?

If you take a look at the atmospheric circulation pattern, the Hadley Cells in particular, they tell the story. The northern edge of Africa is on the descending edge of a Hadley Cell, which means

Having lost most of its water vapor to condensation and precipitation in the upward branch of the Hadley cell circulation, the descending air is dry. As the air descends, low relative humidities are produced as the air is warmed adiabatically by compression from the overlying air, producing a region of higher pressure.

The main air mass being dry already, and the High pressure system generated by the descending air mass along the 30 degree lines work to make the physics required for precipitation just not want to happen in these regions. You have to get a combination of enough humidity to reach saturation, and then cool the air to reach its dew point. The desert region formed by the lack of atmospheric moisture(remember Hadley cell) can't add any humidity of its own through evaporation or transpiration, so the global patterns dominate, even being right on the oceans edge.

Note that Hadley cell edges at the 30 degree south also cut through the Namib,Kalahari, and in South America the Atacama deserts, with their own ocean exposure.

I suppose that the water gets lost to some underground aquifer. And then evaporates during the dry months.

Otherwise it wouldn't be possible to explain why the water that rains down in the Qattara stripe doesn't evaporate straight away to cause rains further south, and so on all the way towards Sudan. It obviously can't drain towards the Nile, because the Nile basin in Egypt is very narrow.

Not the answer you're looking for? Browse other questions tagged precipitation atmospheric-circulation or ask your own question.

0
Prevailing winds between 30 to 60 degrees latitude

18
Why does the Hadley cell descend at 30 degrees?
6
Am I observing orographic rainfall?
14
Is there a standard definition of a "dry-down" event in hydrology?
17
Can climate models reliably predict meteorological extremes?
7
Why do the dry and moist adiabatic lapse rates converge with height?
5
Where can I get historic hourly precipitation data for Italy?
3
Why is the pressure on the poles higher in Summer and lower in Winter?
1
Why does Japan get so much snow?