How did Great-Britain separate from France?

Looking at continental plates both France and GB lie on the Earasian plate. Now those plates moves and created our continents of today out of Pangea.

But a lot of pictures shows that France and GB were once stuck together. Also their shapes looks like they fit together.
But if they lie on the same plate how is it possible that those contries are now separated? Is it possible that the oceans eroded land between them so they became separate? 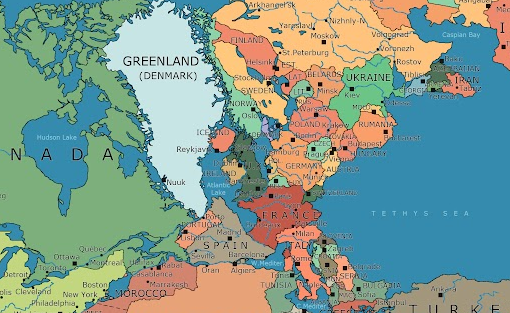 "Is it possible that the oceans eroded land between them so they became separated"? Yes, sort of, but it isn't a simple story. There are several factors: (1) Rivers eroded much of the English channel, mostly during the last ice age when sea level was up to 120 metres below the present level. The Rhine actually flowed (and eroded) much further out into what is now the English channel. (2) Some have argued - though I'm not sure that I agree with them - that at least part of the English Channel was cut by glaciers. However, the main British ice sheet was further north than the channel. (3) There is sound evidence that an ice dam collapsed, resulting in a huge glacial lake outburst, which would certainly have resulted in major erosion. (4) The Alpine orogeny of late Mesozoic / early Cenozoic age, created a compressive zone across much of northern Europe, thereby flexing low-angle folding. One of the major folds was the Wealden anticline, most of which is exposed in southern England, but to a lesser extent also in northern France. Tension fractures in this anticline created an area of weakness and enhanced erosion across what is now the eastern English Channel.

Could microplate tectonics have contributed? Good question. Certainly it is possible for the jostling of major plates to splinter off microplates, or even mesoplates - examples being the Aegean region, and the rotation of Iberia, respectively. I don't have any information on the deep geology of the Western English channel, but I suspect that tectonic thinning of the crust in that area may have contributed to subsidence and subsequent flooding.

Is it possible that the oceans eroded land between them so they became separated?

Yes and no, but it was mostly fresh water rather than the oceans.

What is now the Dover Strait was solid high land until ~425,000 years ago (or perhaps ~200,000 years ago, or perhaps both). That time marked the end of the most extreme glaciation of the last 2.5 million years. Before then, Great Britain was a European peninsula rather than islands off of Europe, connected to Europe by the South Downs, North Downs, and lowlands further to the north.

The Anglian glaciation (Marine Isotope Stage 12) was the most severe glaciation of the last 2+ million years. All of Scotland and most of England were covered with ice at that time. The ice to the north and the downs to the south initially prevented the glacial meltwaters from escaping to the ocean when that ice started melting at the end of this stage. The meltwaters formed a huge glacial lake that eventually overtopped the downs. The resulting catastrophic outburst flood carved deep channels in the chalk. This outburst flood marked the formation of the Channel River.

While the above explains the formation of the Dover Strait, it does not explain how the lowlands to the north of the Dover Strait became separated from continental Europe. Those lowlands have long formed a natural land bridge between continental Europe and the United Kingdom. The North Sea proper did not connect with the English Channel until rather recently. Humans, along with our ancestors, have crossed and lived on those lowlands for a long, long time. For example, hominid footprints from almost a million years ago (in other words, before homo sapiens) have been found on the northern shores of England. Peoples regularly crossed this low-lying land which is now called Doggerland. Rising sea levels following the most recent glaciation spelled the start of the end of Doggerland.

What most likely did Doggerland in were the Storegga Slides that occurred ~8300 years ago. Those underwater landslides created huge tsunamis. Traces of those tsunamis are found 80 km inland on the Firth of Forth. The damage to Doggerland would have been immense.

Claire L. Mellett, et al., "Denudation of the continental shelf between Britain and France at the glacial–interglacial timescale", Geomorphology 203 (2013): 79-96.

17
How did Earth's plate tectonics start?
11
How long did it take for Earth's magnetic field to first appear?
11
What efforts have been made to separate the microseismic events related to wind-related ocean waves from the components of volcanic origin?
10
Is it known what determines the rate with which plate tectonics occur?
16
How much silicon is in the Earth's core, and how did it get there?
6
How high do you need to be to see Los Angeles from Washington DC?
8
How did the Ural mountains form?