In most illustrations and diagrams of the types of faults, there is always something similar. I noticed that there is a side of the hanging wall and foot wall which is slanted. 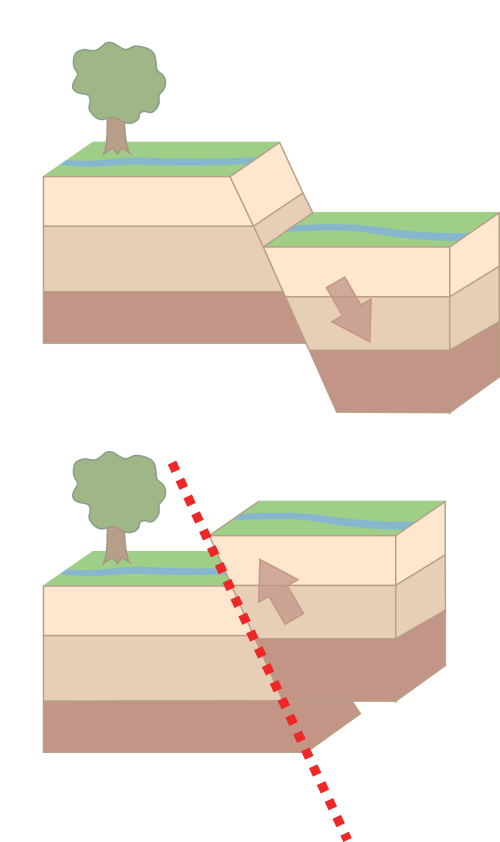 We're supposed to make a models for each type of fault; however, the material to be used will be difficult to cut diagonally. I'd like to know if it is necessary to have one side slanted? Or if having it vertical fine.

Please mention sources too. Thank you.

Faults are results of stress. The direction of the stress controls what kind of fault that is formed. The most fundamental reason for a fault to occur is horizontal compression or extension, even if it's often more complicated in reality.

Your two examples are dip-slip faults, with a vertical displacement as a result of horizontal stress.

In your first example, the normal fault. The total distance (from left to right) is increased. There has been an extension of the crust. If the fault plane would have been vertical, no distance would have been gained.

In the second example, the reverse fault, the distance is decreased. It's been a horizontal compression of the crust. The dip of a reverse fault is usually rather steep. If the dip is lower, you'll rather form a ramp. Typical for thrust faults.

Vertical fault planes are associated with strike-slip faults or ring faults above collapsing calderas or sinkholes. It's also common, but not for textbook examples of dip-slip faults.

So, unless you are showing a strike-slip fault, you have to find a way to cut diagonally. Do measure the horizontal displacement!

Addition about making fault models: We made a layer cake for a college some time ago and (of course) wanted to have a fault in it. The simplest way was to make a reverse fault, erode the uppermost layer of the hanging wall block and assume that the lowest exposed layer was of the same lithology (chocolate sandstone reservoir rock). However, it took some geoenginering to make it look good and we decided to make an impact crater next time.

Not the answer you're looking for? Browse other questions tagged seismology earthquakes plate-tectonics or ask your own question.

7
What is a fault?
12
Probability distribution of fault throw displacement and height limiting mechanisms
11
Relation between fault rupture aspect ratio and slip rate?
8
Calculating the displacement of a fault
9
Groundwater unloading and corresponding changes in fault zone stick-slip behavior
10
How deep are the cracks in the earths crust at fault zones?
6
Is the whole San Francisco Bay Area essentially one giant fault?
3
Earthquake database for fault
2
What is the lateral ground acceleration, at the fault line, during a strike-slip earthquake?