What would be the impact on tides if the earth had no tilt?

I would like to know what would be the impacts/effects on the tides if earth were to have no tilt (perpendicular to plane of ecliptic)?

A simple way to estimate the implications is to simplify the problem. If the orbits of Earth, Sun and Moon were circular and in the same plane, and the Earth had no tilt, the only remaining tidal constituents would be $M_2$ and $S_2$ (also the overtides and combination tides: $M_4$, $MS_4$...). The rest of the tidal constituents can be expressed as linear combinations of their rates of change based on the remaining forcings: orbital eccentricity and inclination and axial tilt.

In the case of the effect of the axial tilt, it modulates the main frequencies based on the solar parameters (the inclination of the Moon orbit is not affected by the axial tilt). The period of the solar declination is a sidereal year (365.2564 days). In the case of the modulation of the $M_2$, the resulting periodicities are 1 cycle/solar day ± 1 cycle/sidereal year. The two resulting constituents are $P_1$ and $K_1$. $P_1$ is known as the solar declinational diurnal constituent. The case of $K_1$ is slightly more complex as the inclination of the Moon also results in a contribution at this frequency. The rest of the tidal constituents are also modified accordingly, but their amplitudes are much smaller.

I cannot answer your hypothetical question, but the tilt does probably affect the tides and there have been some studies on the topic. Hopefully they can inspire to further ideas and speculations. It appears that the main outcome from the report should be for you to understand how the moon, the Sun and the Earth control the tide and how the tidal force works. 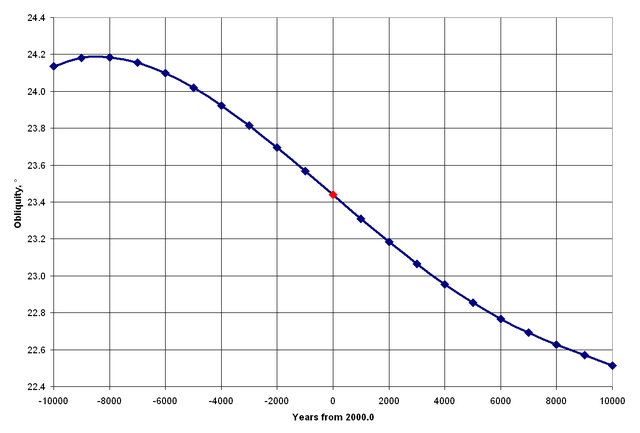 Change in axial tilt over time from Laskar (1986)

We cannot remove the tilt completely, but we can look at the constant axial tilt change in the Milankovitch cycles. Some believe that the impact of this 2.4° change is rather large. Clive Best blog gives the main arguments and suggests some good references. See also this discussion and this paper on tidal change and glaciation.

However, it's difficult to specify how much of the impact that is directly related to the tilt change, as sea level change and glaciation also affects and interacts with the tides pattern. 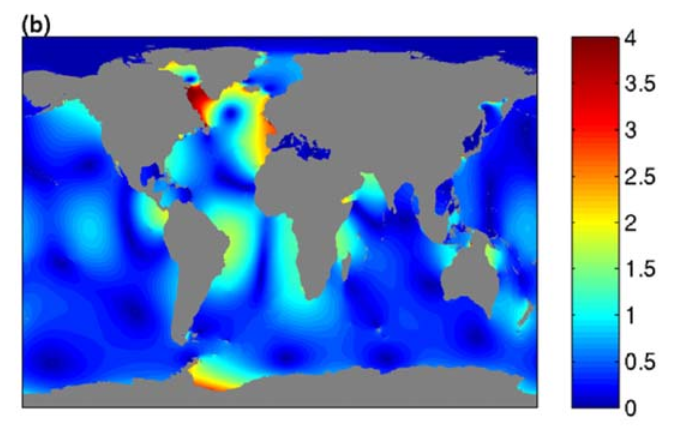 This model from Wilmes and Green (2014) suggests much higher tides at high latitudes during LGM, 21.000 years ago. The model is based on changes in sea-level and glaciation.

From the astronomical data, it however does appear that the impact (tractional acceleration) of the Moon was much higher at large latitudes when the obliquity of the tilt is large (see figure) and this resulted in higher tides at latitudes where glaciation forms.

With less or no tilt, tides at large latitudes should be even smaller and maybe contribute to less breakup of ice sheets.

Not the answer you're looking for? Browse other questions tagged ocean earth-rotation tides axial-obliquity or ask your own question.

20
What can we learn by studying lunar atmospheric tides?
27
Would the Earth function the same spinning the other way?
8
Could Earth have had a greater axial tilt?
13
Climate on an Earth without an Axial Tilt
5
What are the effects of underwater "windmills"?
9
The motion of tides
4
What (if anything) can be learned from accurately recording tilt motion during seismic events?
3
How much is Solar Radiation effected by Axial Tilt or Obliquity?