Adding a little bit of practical data to the above answer about the Gutenberg-Richter relationship, here is a plot of the per-year cumulative probability of earthquakes in a particular province in Japan, based on observed frequencies over many hundreds of years: 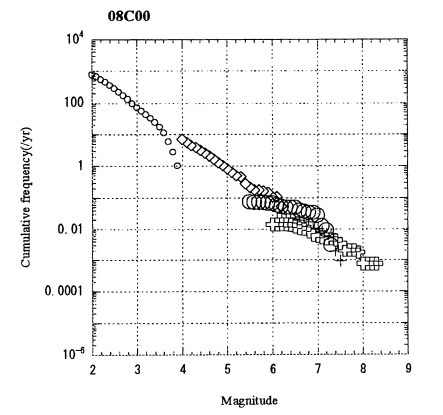 The relationship is plausibly log-linear (in accordance with G-R); if you accept that the relationship will hold up to higher magnitudes, you would estimate the probability of a M10 event in this location at once every 30,000 years.

To get an estimate for "anywhere in the world" you would need the cumulative data for all. A good place to start is the USGS website - they have a handy table with data since 1900.

Taking these data and plotting them on a log-linear graph, then extrapolating a linear fit, gives the following chart: 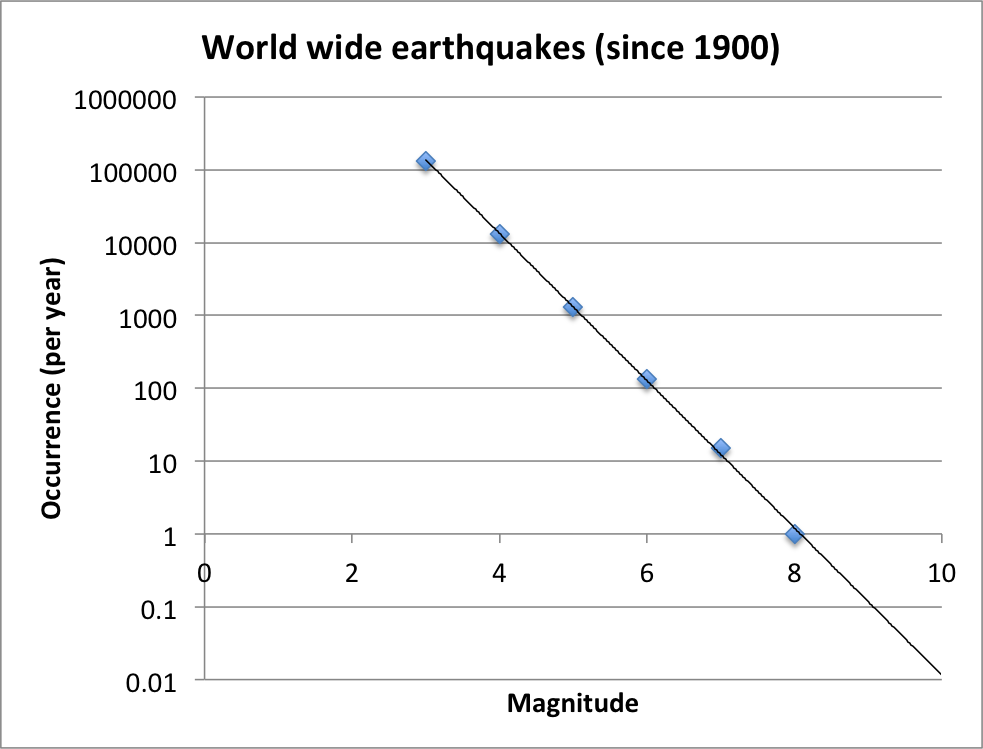 This is rather scary because it suggests that there is about a 1:100 chance of a M10 earthquake anywhere in the world, in any given year. Note that I plotted the data for magnitude x to x.9 at the location of x - which tends to underestimate things a little bit. Note also that at the extreme end of very large earthquakes (8 and above), the data looks like it might be deviating from the straight line - but there are not enough data points to draw any firm conclusions about the shape.

There are several other caveats. First - the assumption that the model can be extrapolated can be challenged: a particular fault may not be constructed in such a way as to store the energy required for an M10 event, as it will always release the energy before it gets there (and there may be a "stress shadow" effect, which says that after a big earthquake, the chance of another big one is temporarily reduced because stresses have been relieved; this is why this model can only be used "over a long period", and does not accurately reflect the risk of earthquake in the next five years).

Where are magnitude 10 earthquakes the most likely to occur?

What is the most likely frequency of magnitude 10 earthquakes?

If they were possible, given there are none recorded in written history, there's no absolution way to say without a great deal of uncertainty. The historical data is misleading. For an explanation, see: (1) "This is probably an observational effect that is quite common in the Earth Sciences." (2) "Note that prior to 1903, there are no earthquakes mapped as located along the mid-ocean ridge."

How big are magnitude 10 earthquakes?

Very big. To get some idea, this pie chart shows how the total seismic moment released by earthquakes over the period 1906-2005 was distributed, with the largest individual earthquakes (left side) and groups of earthquakes (right side). The thin sliver of the 1906 San Francisco Earthquake is also depicted for comparison purposes. Mw designates an earthquake's magnitude on the moment magnitude scale. 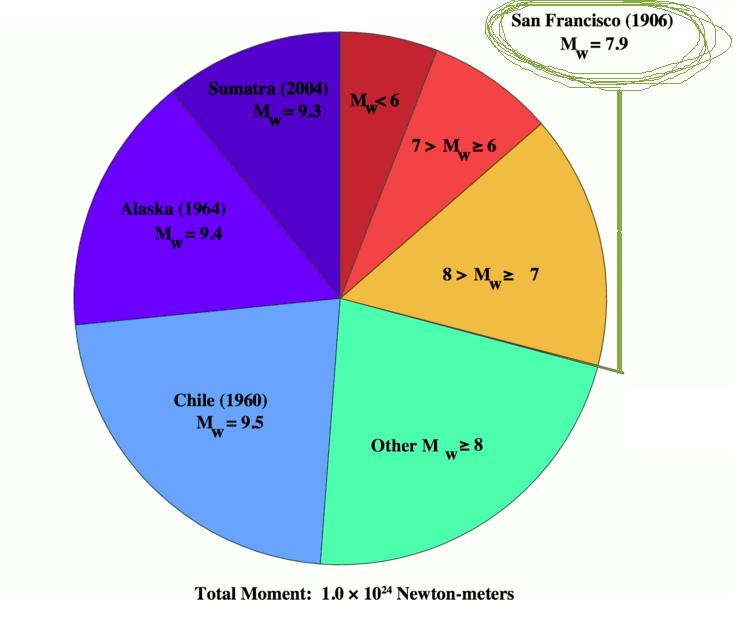 CAPTION: Global seismic release from 1906 to 2005, the graph shows that almost 25% of the world earthquake energy in a century was concentrated in the Great Chilean Earthquake alone.

Magnitude 10 earthquakes are indeed possible, but very very unlikely. You see the frequency of an Earthquake is given by the Gutenberg-Richter law:

where $N$ is the number of earthquakes $\ge M (magnitude)$ and $a,b$ are constants. As you can see, the greater $M$ is, the less $N$ is. $a,b$ are generally solved for statistically, through observational data and regression. But on face value, you can easily see that large magnitude earthquakes become less and less frequent on the exponential level.

As far as where a magnitude 10 earthquake could occur ? My guess is a subduction zone, as that is where the highest magnitude earthquakes tend to be. Which subduction zone? Anyone's guess is as good as mine, Chile or Tonga, though it is also important to note that earthquake magnitude is often related to fault size: I do not think there is a fault long/large enough to generate a $ M \ge 10.0 $ earthquake on Earth currently.

Perhaps this is not what you had in mind, but it seems to be generally agreed that the Chicxulub asteroid impact generated earthquakes in excess of magnitude 10.

Well the dinosaur-killing asteroid that struck the Yucatan peninsula in the gulf of Mexico (65 million years ago!) generated a seismic shock or earthquake that went around the world and registered magnitude 13 on the Richter scale the reason for this was the object was 6 miles in diameter and its mass was equal to all the construction-materials used for every building in the entire USA.

So if you have an object that size (or larger) hitting the earth at a sufficient enough velocity (40-60 000 mph) than yes Magnitude 10 quakes or larger are possible even if they're rare!

It's definitely possible, though not very likely as mentioned above. An unusually long subduction zone, like the Peru-Chile Trench, Aleutian Trench, or Japan-Kamchatka Trench would have to rupture in its entirety to trigger one. In other words, it would have to be a quake that hits Russia and Japan at the same time, or a quake that hits Colombia, Ecuador, Peru, and Chile all at the same time, etc.

Also, a Moment Magnitude 10 earthquake won't necessarily feel much different in terms of how far buildings move from, say, an 8 or 9. The shaking, however, would last for much longer ― about 30 minutes ― and be spread over a much larger area. And then, of course, there's the tsunami, which could hit land while the shaking is still going on, greatly adding to the damage such a quake could cause.

16
Does volcanic activity fluctuate?
19
What are the physical upper bounds on the magnitude of an earthquake?
5
Are there more earthquakes near the equator or poles?
6
largest earthquake not in a subduction zone
5
What happens if a magnitude 13 earthquake occurs?