What? Northern lights are *not* simply caused by energetic charged particles from the sun?

Reading the article Northern Lights: The traditional explanation for the aurora borealis is wrong, physicist says I was surprised to find out that the simple, standard explanation for the production of aurora that I have always read and cited (and is described well in this answer and it's linked sources) is at best incomplete.

The article cites this talk and this video. Briefly, the size and brightness of at least some Auroral displays are larger than can actually be explained by particles from the sun simply following field lines down to within a few hundred kilometers of the earth and exciting the atmosphere, especially on the night side.

Magnetic line reconnection can serve as an energy source to accelerate electrons to higher energies (and fluxes?) to produce the more powerful displays.

I'd like to know - is this reconnection phenomenon important with most displays, or only in highly unusual events? Can Aurora observed at midnight be excited by the energy of the particles as-is (from the sun) or is acceleration from reconnection necessary to insert them on lines that reach to the anti-sunward line on the earth?

The following NASA videos appear to be related:

Solar wind particles directly entering the Earth's magnetosphere are not responsible for the majority of bright auroral displays. As you have found, it is magnetic reconnection that accelerates magnetospheric plasma that collides with the upper atmosphere to cause the visible aurora.

The Solar wind does enter the magnetosphere directly, and travels down the field lines that have their feet poleward of the main auroral oval. This is termed the polar rain¹. The particles in the polar rain are usually too low energy and low intensity to provide visible aurora, though they do produce X-rays as the particles accelerate in the atmosphere (for example, in this report of a Nasa study). On occasion, the polar rain can become energetic and intense enough to generate visible emissions, unsurprisingly termed 'polar rain aurora'².

Magnetic reconnection is responsible for the displays that people usually think of as the Northern Lights. The brightest aurorae typically occur on the auroral oval around midnight Magnetic Local Time (MLT). This can be seen in the results of the current OVATION model below. 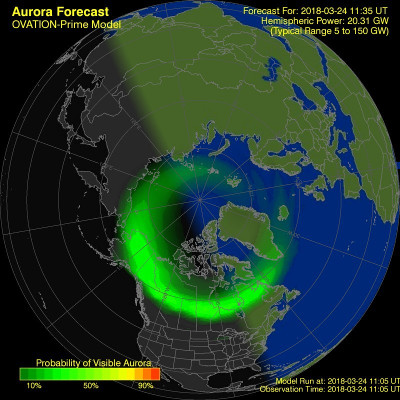 The energetic electrons that cause the bright midnight aurora are generated by reconnection in the magnetotail, the portion of the Earth's magnetosphere that streams behind the Earth, dragged by the motion of the Solar wind (this is briefly mentioned in the NASA youtube videos linked in the question). We can tell this from the fact that the aurorae occur in a distinct oval around the pole.

The bright aurorae occur near the open-closed field line boundary³, toward the closed side of the boundary. Closed field lines are those that have one foot in the northern hemisphere, follow a continuous closed path through the magnetosphere and have a second (conjugate) foot in the southern hemisphere. This means that any charged particles on these field lines must originate from within the Earth's magnetosphere.

Conversely, the field lines accessible to charged particles from the Solar wind are the open field lines; it is along these field lines that polar rain occurs. These occur closer to the pole than the closed field lines, and form the dark area around the pole where the aurorae are not usually observed. The field lines are 'open' in the sense that they connect to the interplanetary magnetic field and are connected to the Earth at only one end, the other being open to the Solar wind.

So, why is this news in the 2010s? I would suggest that it is a case where an earlier, simpler explanation has become lodged in the public consciousness long after it has passed from being the state-of-the-art. Around the turn of the 20th century, the earliest investigations into the aurorae involved physical models of the magnetosphere and the Solar wind. These terrellas suggested that Solar wind directly caused the aurorae, but left investigators such as Kristian Birkeland unable to explain why the real aurorae did not occur over the pole itself, as the terrella model suggested they should.

Not the answer you're looking for? Browse other questions tagged auroras magnetosphere or ask your own question.

8
What modelling approaches are used to predict the aurora?