How much does the electric current within the Earth' core depend on the axis of the Earth's orbit?

I always thought that the movement of the iron core was caused by the axis of orbit of the Earth. Probably that isn't quite as true as I read, because in the core the iron material undergoes types of swirls. I read that there exists about 6 or 7 swirls in the outer core, with the one under Asia the fastest, creating a bigger magnetic field, and the one under America the least active, giving a weaker magnetic field.

So if those swirls underneath the continents are stationary, the current swirls aren't caused by the Earth's orbit axis. Instead the swirls arise due to the cycle of material rising, solidifying, and sinking back to the core. But I'm not sure I understood this well.

But nevertheless, isn't the current that causes the magnetic field affected by the Earth's axis (or perhaps the orbit around the sun)?

There's still a lot that isn't understood about the Earth's magnetic field, so there's some uncertainty to any answer to your question. That said, I touch on some of it.

I'd say probably not. We can see this by looking at other objects with magnetic fields relative to their axis. There are some theories that planets need to rotate to have magnetic fields, but Mercury rotates very slowly and it has a small magnetic field. Mars rotates with a similar period to Earth and it lost it's magnetic field about 4 billion years ago. 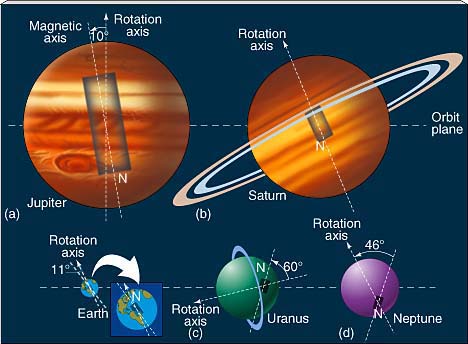 Often, the magnetic field is not aligned with the spin axis

The Magnetic Axis and the Axis of Rotation seem to have very little to do with one another. The Rotation Axis' relation to the plane of the solar system, I suspect that has even less influence, but I have no idea how to go about explaining the why behind that, it just feels improbable to me because the effect seems more internally generated and the inside of the Earth cares which way it spins and stretches, but not how it lines up with the plane of the solar system - (I would guess).

In addition, the Earth's Magnetic North Pole moves around. Earth's Axis changes very slowly. It's difficult to see a relation between the two beyond "in the same general area". 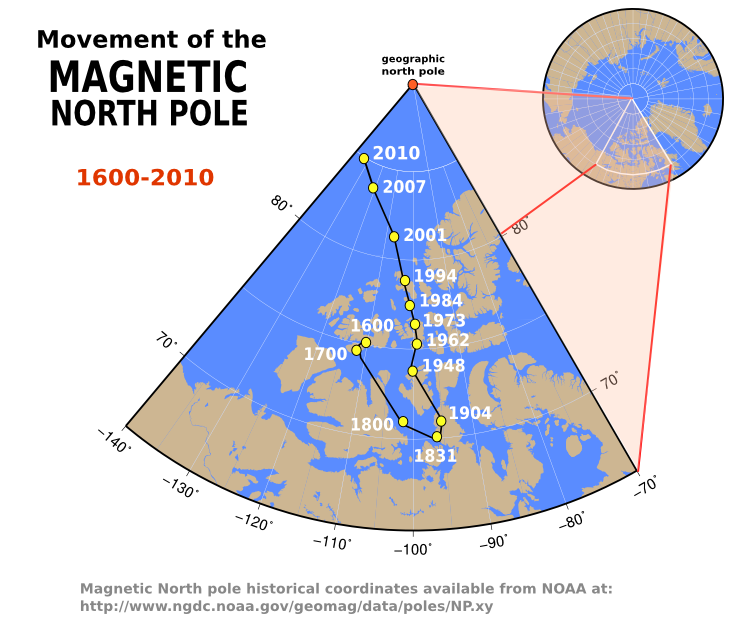 It's always good to explore possibilities. Pretty interesting, short article on Mars' loss of it's Magnetic field here that suggests it's the inner workings of the planets that drive magnetic fields.

When there's enough temperature variation and a liquid medium, spirals (or swirles) can form because circulation is more efficient than convection at heat transfer. Like the atmosphere, you also have the hotter material wanting to expand and rise and the cooler more condensed material wanting to fall, but you also have increasing pressure as you go down, and, perhaps, not uniform molecular density, so it's a pretty tricky subject requiring lots of math behind when spirals form and when they don't. The solidifying of the other core into the inner core and heat released from that phase change may play a role too. (I read that, will post a source if I can find one). 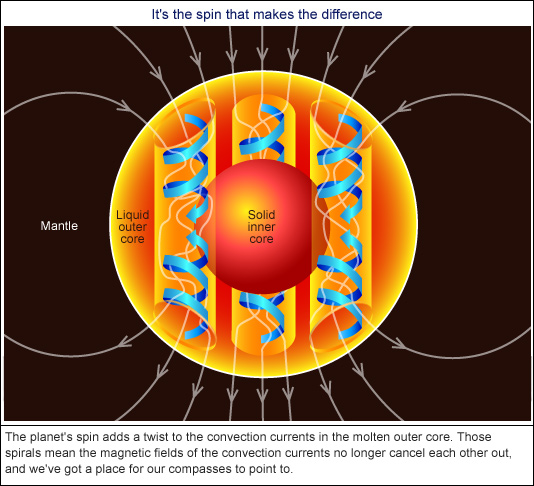 Earth's relatively rapid rotation (and corresponding Coriolis effect) might keep the magnetic field pointing roughly North-South (I would guess) but as noted in the map above, there's a fair bit of wobbling and in addition to that, every few hundred thousand years the field flips.

The Moon may cause the movement of the magnetic poles too. 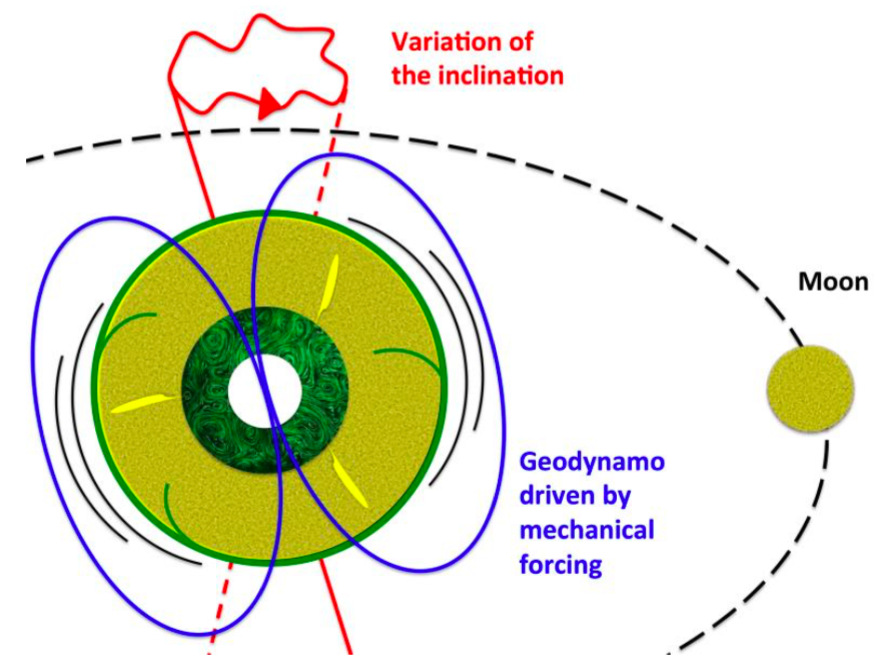 (yes, I just quoted you twice)

That article just above suggests the stretching and squashing of the Earth, both due to the Moon and the Sun would have an effect, so in a sense, the Orbit around the Sun might affect the magnetic field, but more the tidal effects from the Sun than the actual orbit itself.

Because this field remains unresolved, we should never say never until it's better understood.

The swirls that you are talking about probably refer to convection columns in the earth, but I have never read the word "swirl" in the literature for those. An introductory paper for you might be this : http://ceas.iisc.ernet.in/~bsreeni/currsci10.pdf

You can have a look at the references of this paper if this doesn't satisfy you. Also, these convection columns give rise to the stable dipole of this earth and will remain stable until a reversal happens inside the core. They are a result of complex intermingling of different types of forces inside the core namely the coriolis and the buoyancy forces.

11
Why does Earth's outer-core rotate in the opposite direction to the inner-core?
18
How long until Earth's core solidifies?
9
Is it known what determines the rate with which plate tectonics occur?
16
How much silicon is in the Earth's core, and how did it get there?
9
How isotropic is the Earth's inner core boundary?
9
How fast does the Earth's inner-core spin?
2
How much of all current energy on earth arrived as sunlight vs. as kinetic energy during formation?