Estimating the residence time of atmospheric CO2 from bomb 14C

This (rather dodgy) graph shows a number of estimates of the residence time of atmospheric CO2: 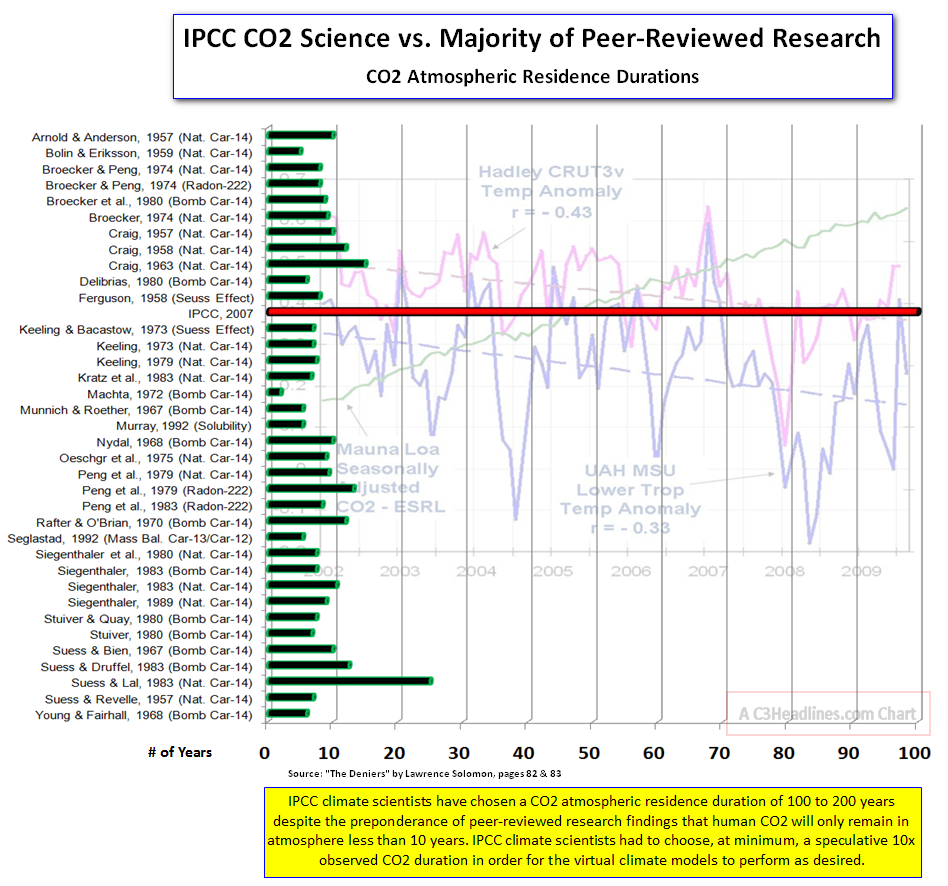 My question concerns why there is so much variation (Machta, 1974 about 3 years, Seuss and Druffe, 1983 about 12 years) in the estimates based on the decay of bomb 14C, given that it seems reasonably easy to estimate from the decay after the nuclear test ban treaty in 1963: 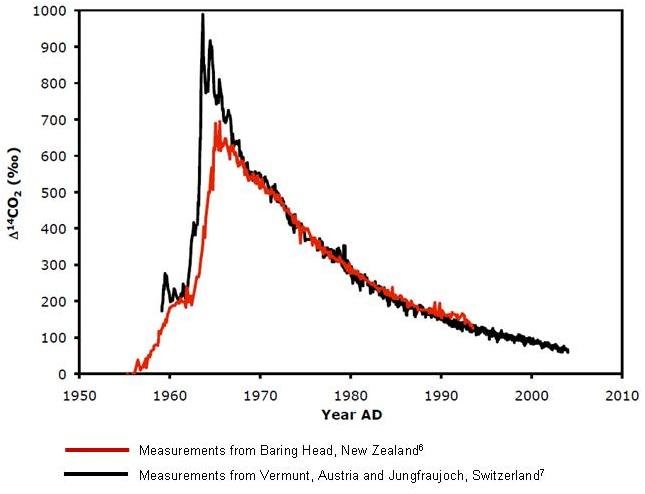 Is there some complicating factor?

I've been doing some thinking and research about this and some issues that might be relevant are:

atmosphere carbon-cycle
Share
Improve this question
edited May 12 '17 at 14:38

Judging by the general quality of the first graph, I don't think that it is the most reliable source. However as I don't feel like reading trough all papers, I will accept the numbers as they are stated. However once you include uncertainties of the observed residence time, I would assume most of the studies are not significantly different from each other.

The variability in the calculated residence time can be due various reasons; the measurement location, the number of observations used and the length of the observational record.

The measurement location is probably the most important source of variation as results may vary a lot depending on where you measure. Multiple observation locations measuring what is called background air masses would be needed to get a good indication of the global average residence time of $CO_2$ in the atmosphere.

I would say you are spot on with the complicating factors. Local influences are important as $CO_2$ emissions have different radiocarbon signatures depending on their origin. $CO_2$ from fossil fuel burning contains no radiocarbon while the nuclear industry emits low amounts of pure $^{14}C$ (not necessarily in the form of $^{14}CO_2$ though). The natural sources and sinks of $CO_2$ (biosphere and ocean) are also not in equilibrium with the atmosphere since the atomic bomb tests in 1950s and 1960s. Immediately after the bomb tests, the large amount of $^{14}C$ produced in the atmosphere meant that it was enhanced in $^{14}CO_2$ compared to the biosphere and the ocean. Since then, $^{14}CO_2$ has decreased in the atmosphere, as it was taken up by the biosphere ant the oceans. This lead to an such a large increase in $^{14}C$ in the biosphere and the surface ocean, that they are now enhanced compared to the atmosphere.

This graph including the oceans should explain what I mean. 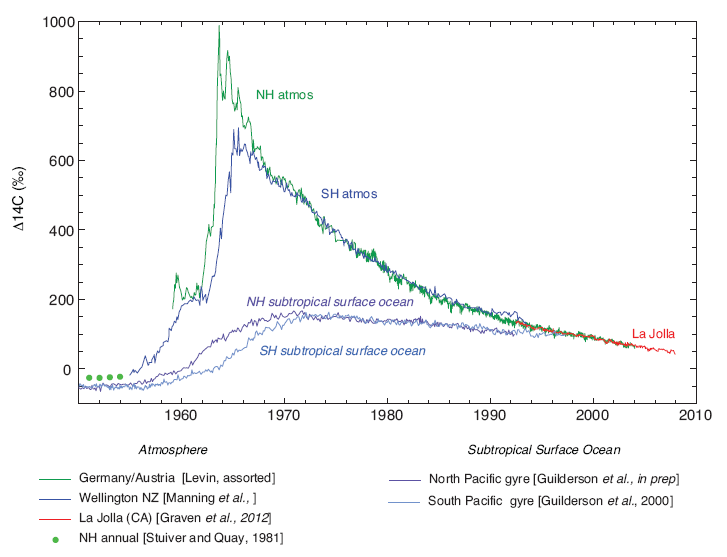 Not the answer you're looking for? Browse other questions tagged atmosphere carbon-cycle or ask your own question.

5
What is the time-lagged correlation between historical $\ce{CO2}$ records from ice cores and global temperature records?
8
Why has CO2 decreased in the history of the Earth?
9
ppmV versus μmol/mol for atmospheric CO2 - how to convert?
5
How to calculate residence time for an element in a reservoir?
5
Why did the carboniferous period have so much atmospheric oxygen?
1
Trends in atmospheric CO2
2
For a tree over its entire existence, does it actually have a net negative effect on atmospheric CO2?