Recently, there has been a lot of information about "King Tides" (i.e, perigean spring tides) on the news with a number of groups relating the peak king tide to future normal conditions (2050) under sea level rise scenarios along the east coast of the United States.

with the recent tides for the entire planet (spring tides):

My question is related to the recurrence interval of perigean spring times. Some sources mention that they occur 3-4 times a year. If that is the case, then why such a focus on the mid-October 2016 event?

Another related question, which constituent of the tide is associated with the perigean/apogean oscillations?

The perigean spring tides arise when the spring tide occurs during the time of shortest distance between Moon and Earth. As the full moon on October 15-16, 2016 occurred near perigee, then it can be consider a "supermoon" even if the difference in Moon size was not that great. The fact is that the October full moon was not even the largest of the year; that will occur in November:

Thus, the mid-October was exceptional in a sense, but will be surpassed by the November event.

We can resynthesize a time series of tidal elevation 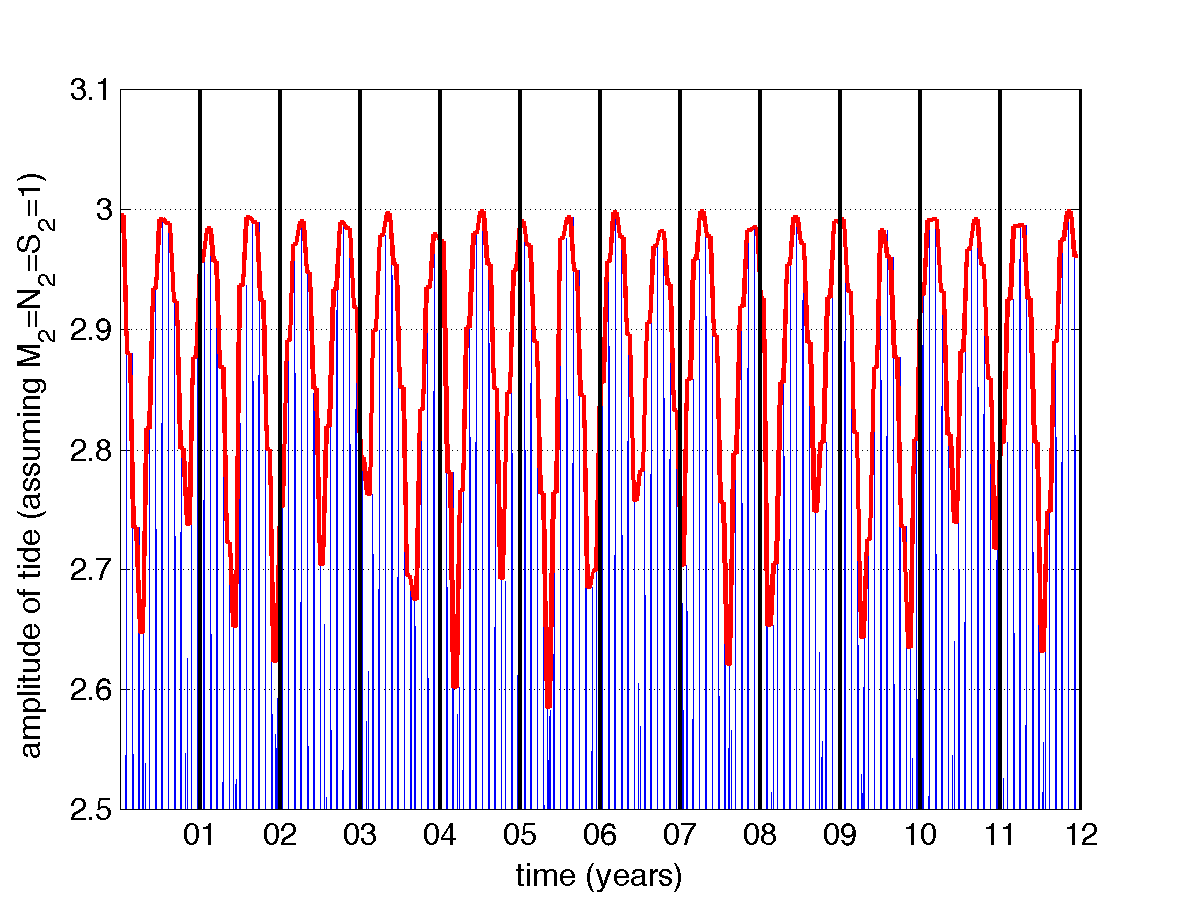 based on only these three tidal constituents ($M_2$, $S_2$, and $N_2$). The resulting time series of amplitudes has an envelop that shows the size of the spring tides. As can be seen in the figure, even including only these three constituents, the resulting variability in the size of the spring tides (12 years shown) is pretty high. The problem is how to define "king tides". There are some spring tides that are larger than others, but even among the largest there is variability. This is where the uncertainty on the definition of the recurrence interval of the "king tides" comes from. Ultimately, it seems that having ~2 peaks ("king tides") per year is a good approximation. Including 3 constituents is a significant simplification and the entire series gets more complicated when additional constituents are included and defining a "king tide" is also more difficult.

Not the answer you're looking for? Browse other questions tagged ocean oceanography tides moon or ask your own question.

9
The motion of tides
3
Why don't spring tides occur at full/new moon (age of tide)?
0
Can tides at night by consistently higher than in the daytime?
0
Musing on Earth's gravity

20
What can we learn by studying lunar atmospheric tides?
14
Why is there a daily inequality for low tides?
4
How often does the moon "set" for us compared to the sun?
3
How much do tides affect earth's rotational velocity?
9
The motion of tides
3
Why don't spring tides occur at full/new moon (age of tide)?
6
Why do high tides vary month to month?
10
Why high tides occur simultaneously on opposite sides of the Earth?