How can every ton of CO2 cost 3 square meters of summer sea ice per year - quantitatively?

The Science article The average U.S. family destroys a football field's worth of Arctic sea ice every 30 years states:

Every additional metric ton of carbon dioxide (CO2) puffed into the atmosphere appears to cost the Arctic another 3 square meters of summer sea ice.

which carries a link to the abstract of a peer-reviewed Science paper Observed Arctic sea-ice loss directly follows anthropogenic CO2 emission. However the abstract says (in part):

Since climate-model simulations of the sea-ice loss differ substantially, we here use a robust linear relationship between monthly-mean September sea-ice area and cumulative CO2 emissions to infer the future evolution of Arctic summer sea ice directly from the observational record. The observed linear relationship implies a sustained loss of 3 ± 0.3 m2 of September sea-ice area per metric ton of CO2 emission.

My question is about the simplification of linking tons of CO2 to square meters of ice, and without reference to time. The abstract seems to simply say that there appears to be a linear relationship, and since models disagree, then this is a "good enough" way to think about it.

Is it so simple - if in 2017 no CO2 were burned the sea ice would return to normal? No. The summer sea ice would likely continue to decrease for decades. An analogy might be births and deaths of a population. While there might be a rough (or "robust") correlation between birth rate and death rate, a cessation of births in a given year would have almost no impact on death rate for perhaps a half-century.

Is there any mathematics that justifies this simple "robust linear relationship" to be causal? What does "directly follows" mean?

I'm not in any way questioning the causality between CO2 and a wide variety of changes in climate, including reduction in summer sea-ice. I'm only questioning the original quote and the quantitative relationship: 1 metric ton of CO2 costs 3 square meters of summer sea ice. 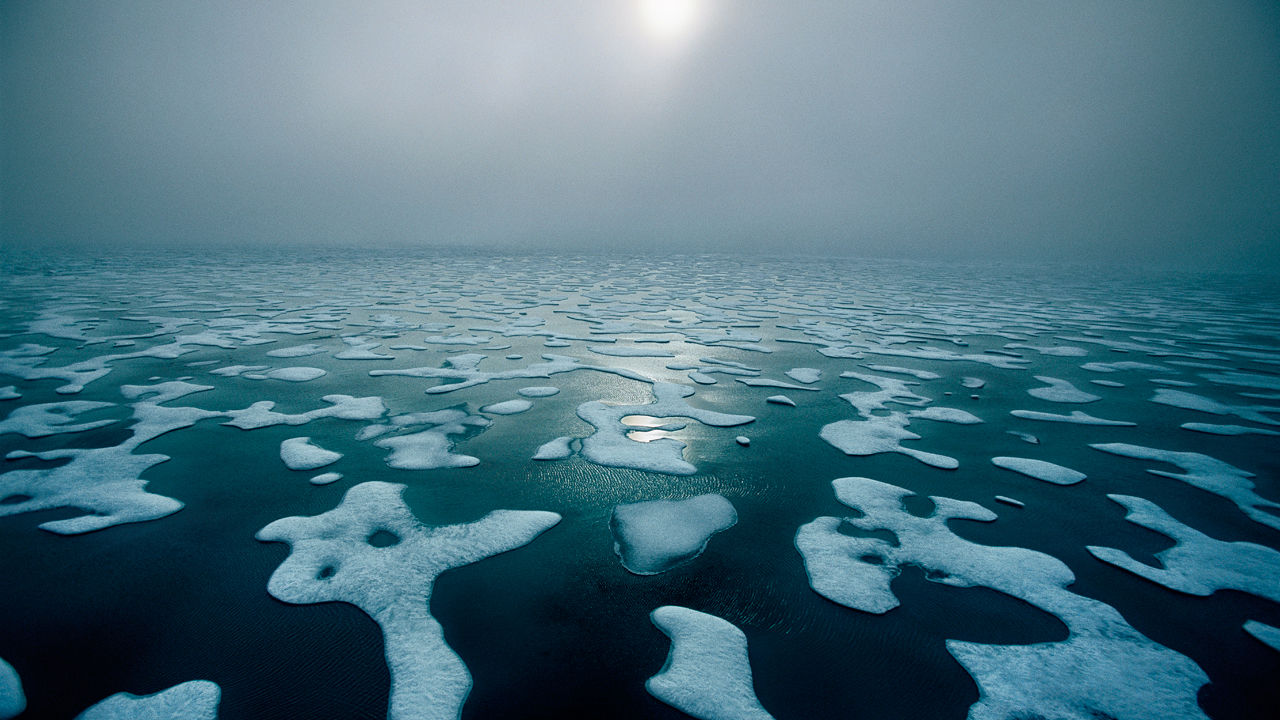 above x2: Graphics from Science Magazine.

First lets take the question at face value and do the simple comparison. I will take the years 1979 and 2016 as arbitrary example, over a 37 year period - the longest for which accurate data are available. During that time the minimum extent of Arctic sea ice, defined as the area of Ocean with at least 15% of sea ice (as determined by satellite) decreased from 6.93 to 4.14 million square kilometers. That is, a decrease of 2.79 M Km2. The actual ice loss was much greater because of ice thinning, but that is incidental to the question. During the same period the CO2 emissions by the USA increased by about 160 M tonnes. So on the face of it, assuming a direct linear relationship, 1 tonne of emitted carbon from America results in an average of 0.029 km2 reduction in ice, or about 3 hectares (Not Km2! let's get the units correct!).

Of course, as every scientist knows, a correlation - even a good correlation, doesn't necessarily imply causation. In this case it would be correct to say that every tonne of burned coal eventually contributes towards the loss of Arctic ice, but the whole process is much more complex, with an abundance of other contributing factors, feedback processes, and non-linear relationships coming into play. Among these complicating factors are Arctic ice thinning, changing Arctic albedo, changing ocean-scale oscillations, Other country emissions, inter-annual changes in thermal inertia (land, ice, sea and atmosphere), and high-level atmospheric chemistry (volcanic gasses, aerosols, etc.). So although there is an element of truth in your article, it would be naive to imply a direct relationship.

To keep an eye on how the Arctic ice is responding to climate change I highly recommend http://nsidc.org/arcticseaicenews/

Not the answer you're looking for? Browse other questions tagged climate climate-change co2 sea-ice or ask your own question.

15
Naming convention for sea ice thickness per unit area of ice or ocean
10
How do I calculate Per capita $\ce{CO2}$ emissions?
14
What is a reasonable forecast of sea level in 2100?
18
Is this 70km crack in an ice shelf of Antarctica remarkable, or a regular occurrence?
1
How reliable is sea-ice concentration (fraction) data in ERA-Interim?
0
How do we apply CO2 sensitivity (3C ± 1.5C for every doubling) to current CO2 levels
3
Which type of plant absorbs the most net carbon dioxide per year per square km?