Determing whether an area is Inland or Coastal

I have determined an area to be along the coastline just from looking at its climagraph. Its temperatures only range from -10 to 21 so there is not a large range of temperatures because it is being moderated by the ocean. However now I need to see if the wind speeds provided back my answer up. The windspeeds range from 10.7 km/hr to 15km/hr and there is only 8 days a year where the windspeeds are greater or equal to 52km/hr. So I was not given the name of this location but just from this information about windspeeds I need to back up my answer saying that this region is a coastline region. But how do I go about that?

Well, let's start with a rough global map (from NCEP Reanalysis) of the average winds speeds (in meters per second): 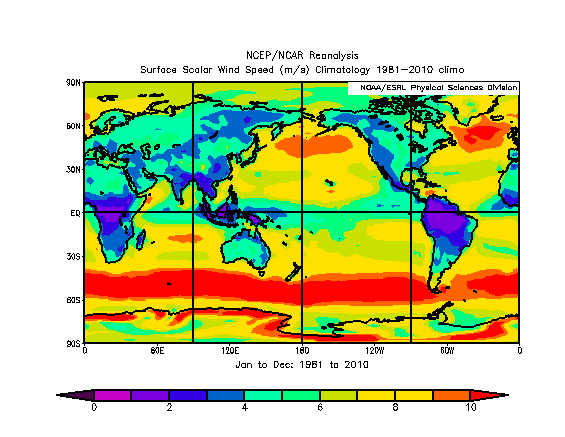 Multiply by 3.6 to get km/hr. So your range is basically from 3 m/s to 4 m/s. So you're looking at the medium blue color basically. There are some coastal locations. But generally, coastal locations will have quite a bit of wind... 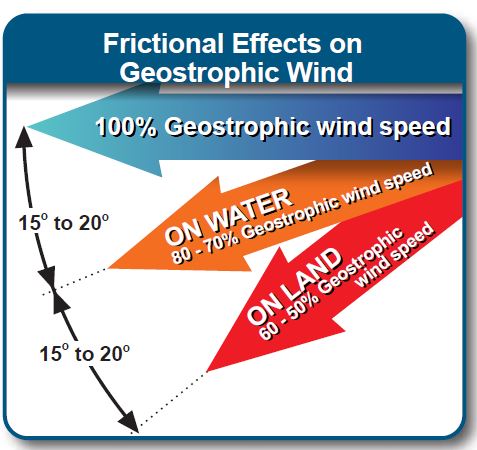 What this graphic says is that basically winds at the ocean are 15-60% increased from typical land values. Even more upsetting to being coastal is the 8 days less than 52 km/hr that you mention. You're in a location reasonably mid-latitude, so you've traditionally got the big wind storms that often affect the coastal areas, such as Nor'Easters, and Bering Sea cyclones. I'd think it'd be hard to find an oceanic city that doesn't get above 52 km/hr more than 8 days during a year outside the tropics (assuming you're talking about short burst of 52 km/hr and not daily averages, but even daily averages I'd think might surpass 52 km/hr 8 days per year in the majority of seaboard cities).

So I'd be surprised to see that it is truly a coastal location. However there are a couple places with connections to water that might fit still.
1 - Near inland seas\lakes would have somewhat lower wind because of the diminished water fetch available and the decreased percentage of the year that wind flows over such water. 2 - The transition zone from marine winds to land winds is probably only something like 10-100 miles, while temperature moderation is still significant, even moreso if there is water on many sides.

Because your temperature range is only indeed 31 C (56 F) wide, that certainly does seem to still suggest it has significant moisture influences.

Now, 21 C seems a fairly cool value (especially if that's the absolute maximum daytime peak during the year, but even an average of 21 seems a tad cool, especially for cities not right on the water. So that suggests to me that it's pretty far north, or perhaps abuts rather cool waters.

So, looking at the map, and based upon those ideas, I'd think the favorite might be inland Russia or China... or maybe around Italy\Greece. Just the right city location in the northern US or Canada might work too, like Portland (Oregon), Detroit, or Ottawa.

Not the answer you're looking for? Browse other questions tagged climate temperature wind coastal or ask your own question.

14
Ice Coverage on the Laurentian Great Lakes
1
Wind speed, precipitation, extreme daily precipitation
9
Does the global temperature vary daily (hotter and colder days)?
5
How is heavy rainfall determined in National Climate Assessment
3
What is the most optimal latitude on Earth for the generation of extreme maximum temperatures?
3
Could pumping ocean water into desert areas help reduce sea level rise?