Is there any explanation for the large amount of sea ice around Antarctica in 2014?

As can be seen from the below data, for the past year or so (2014), sea ice surrounding Antarctica has been well above normal. Currently, Antarctic sea ice is at an all-time record high for this time of year, 1,344,000 square kilometers above normal (or about the size of Spain, France and Germany put together). 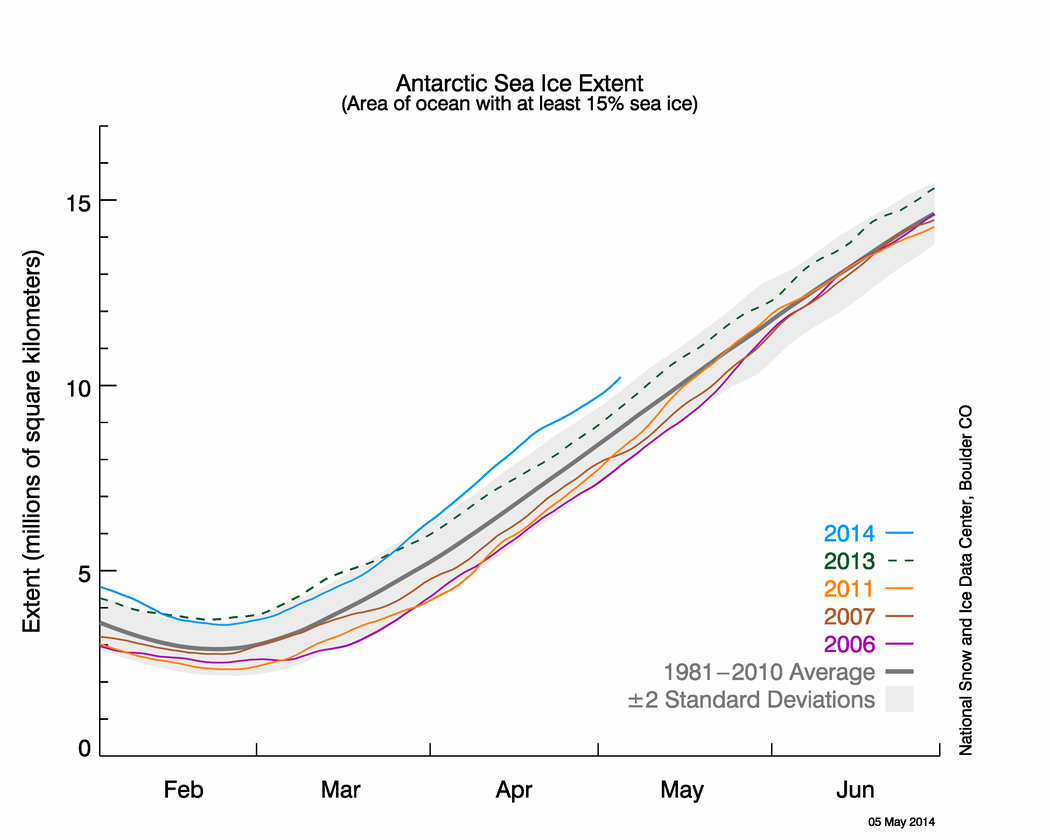 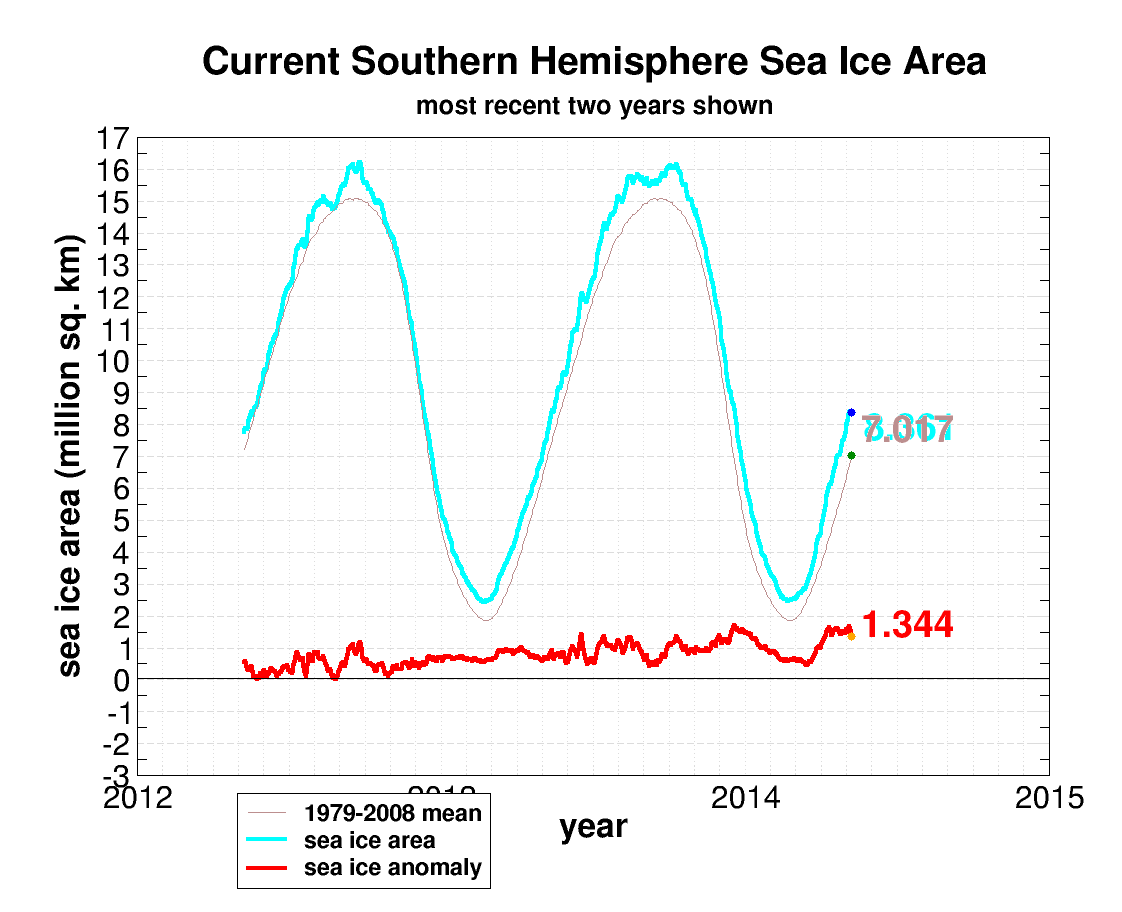 Source of data is the US National Snow and Ice Data Center sea ice news for April 2014 (for the upper graph) and University of Illinois's "The Cryosphere Today" (for the lower graph).

Now the anomalously high southern sea ice has reached a record level for any time of year, at more than 2 million square kilometers above normal. 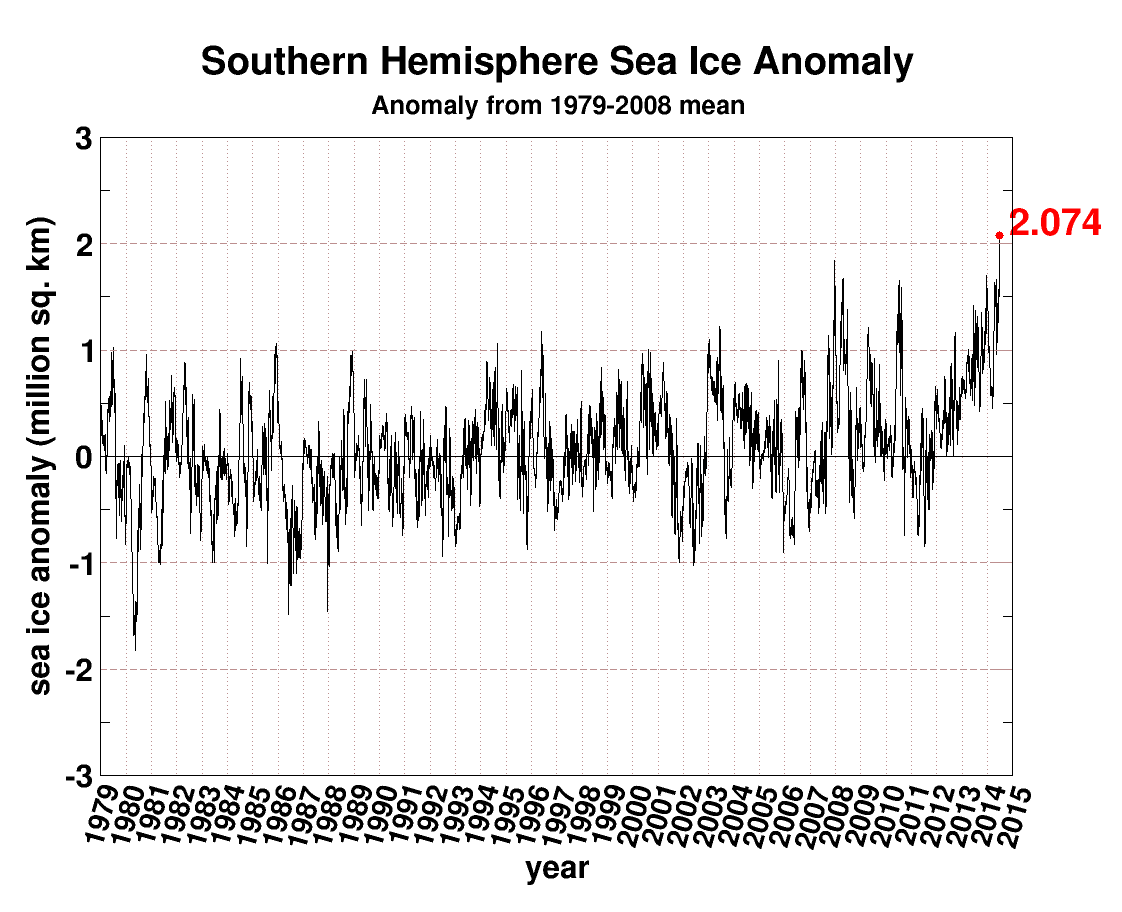 It's not as significant an increase as you think.

There's a nice proxy for sea ice extent, at least during Antarctic summer, in the locations at which whalers made their catches and established their factory ships (Williams 1997). In the first half of the 20th century, whalers sought species that concentrated near the edge of the Antarctic sea ice. By the early 1930s whalers had developed a practice of anchoring factory ships within 20 km of the ice edge and followed the ice southward as summer progressed. This practice continued throughout the 1930s and resumed after WWII through to the mid 1950s. The practice was later restarted in the mid to late 1970s. Every whale caught by Norwegian whalers was tagged with date, latitude, and longitude. The practice of setting up shop near the ice edge gave Williams a nice way of estimating the pre-satellite era ice extent.

What Williams found was that summer Antarctic sea ice suffered a massive decline that continued throughout the 1950s and 1960s. The ice levels we are seeing now, at least during Antarctic summer, are on par with the levels seen eighty years ago.

The Interdecadal Pacific Oscillation is strongly in its negative phase.

The Interdecadal Pacific Oscillation (IPO) is highly correlated with a hiatus in perceived global warming and also with increased precipitation in the Antarctic (Meehl 2013). An increase in precipitation means that surface waters are less salty (increasing the freezing point) and cooler. The combination of reduced sea surface temperatures and reduced salinity makes for increased ice formation during the Antarctic winter during periods when the IPO is in its negative phase.

The Southern Annular Mode is at a 1000 year high.

It has long been suspect that stronger winds are one of the causes of the increase in the Antarctic sea ice levels (Zhang 2007, Zhang 2014). Winds help create polynyas, open areas of water surrounded by ice. That open water is subject to freezing during the Antarctic winter. Not only are the winds strong now, they are stronger than they have been for at least 1000 years (Abram 2014).

(Note: this is based on what I found in literature. Sea ice is not my expertise.)

The seasonal trends are significant mainly near the ice edge, with the values alternating between positive and negative around Antarctica. Such an alternating pattern is similar to that described previously as the Antarctic Circumpolar Wave (ACW) (White and Peterson, 1996) but the ACW may not be associated with the trends because the trends have been strongly positive in the Ross Sea and negative in the Bellingshausen/Amundsen seas but with almost no trend in the other regions (Comiso et al., 2011). In the winter, negative trends are evident at the tip of the Antarctic Peninsula and the western part of the Weddell Sea, while positive trends are prevalent in the Ross Sea. The patterns in spring are very similar to those of winter, whereas in summer and autumn negative trends are mainly confined to the Bellingshausen/Amundsen seas, while positive trends are dominant in the Ross Sea and the Weddell Sea. 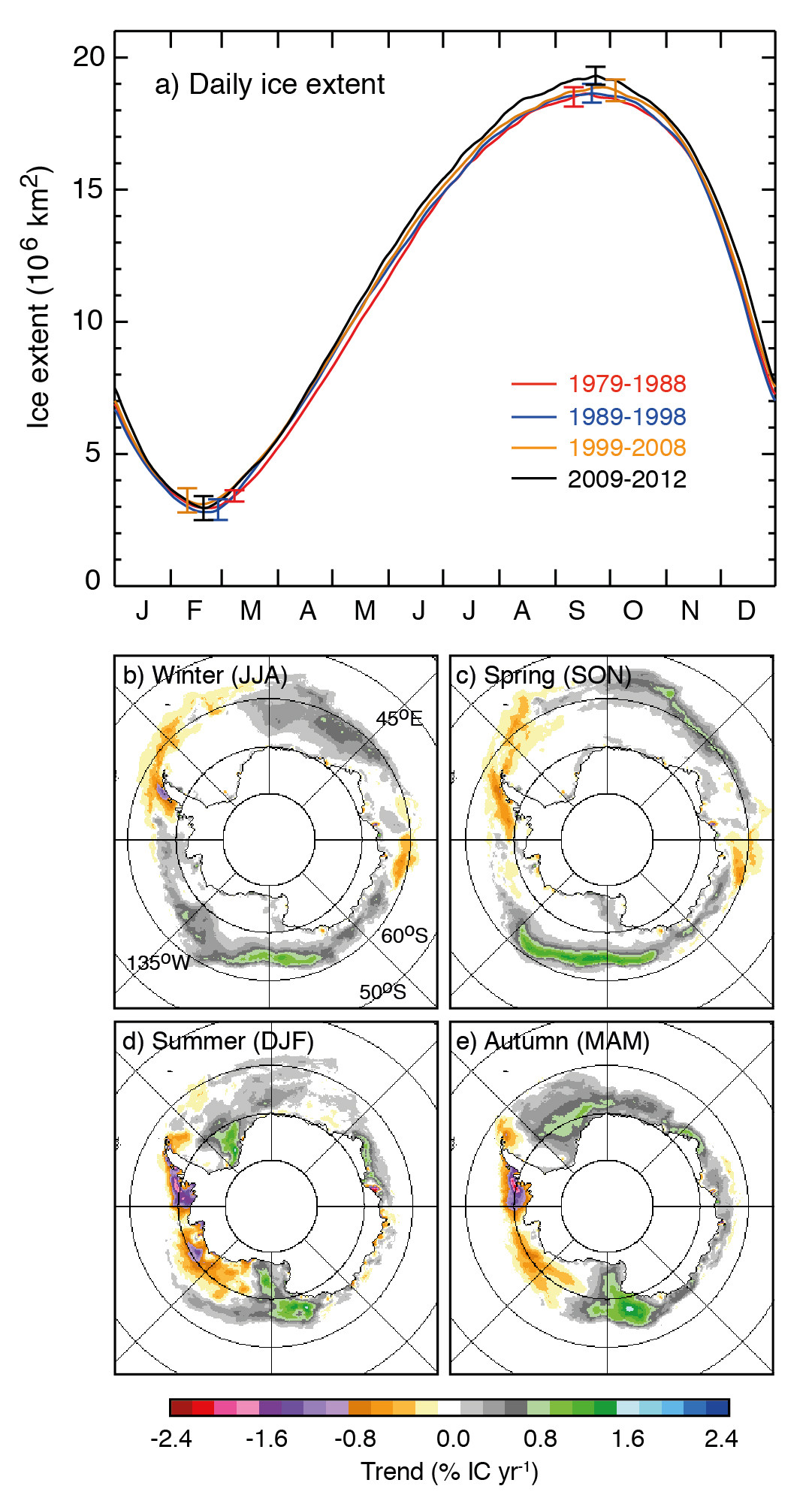 A recent article on the topic is by Holland and Kwok (2012). In the abstract, they summarise:

The sea-ice cover around Antarctica has experienced a slight expansion in area over the past decades1, 2. This small overall increase is the sum of much larger opposing trends in different sectors that have been proposed to result from changes in atmospheric temperature or wind stress3, 4, 5, precipitation6, 7, ocean temperature8, and atmosphere or ocean feedbacks9, 10.

So, the best answer we can give so far is: we don't really know.

I looked at trends in Antarctic sea ice extent in the satellite era from 1979 to 2015 for both the summer minimum (February) and the winter maximum (September) and did not find a statistically significant trend. Please see:

Not the answer you're looking for? Browse other questions tagged antarctic sea-ice cryosphere or ask your own question.

15
Naming convention for sea ice thickness per unit area of ice or ocean
9
Is the Arctic sea ice volume increasing?
11
Is there conclusive evidence for the Antarctic Circumpolar Current developing after the glaciation of Antarctica?
13
Is Antarctic sea ice at record levels?
8
When does the Northern Hemisphere reach minimum land area covered by solid H2O?
3
How can every ton of CO2 cost 3 square meters of summer sea ice per year - quantitatively?
18
Is this 70km crack in an ice shelf of Antarctica remarkable, or a regular occurrence?
8
The giant 6,000 km$^2$ iceberg A-68; will ground-truth telemetry supplement satellite tracking data?
14
What is likely to have happened with these newly discovered antarctic volcanos below the ice?
5
Is the Arctic sea ice disappearing in a linear or non-linear way?