Is it possible to find pleochroic halos in muscovite ? I would have said that it must be biotite (also, in PPL it is brown!), but then.. why does it have interference colors so similar to muscovite ? Or is it anything else ? Thanks for help ! 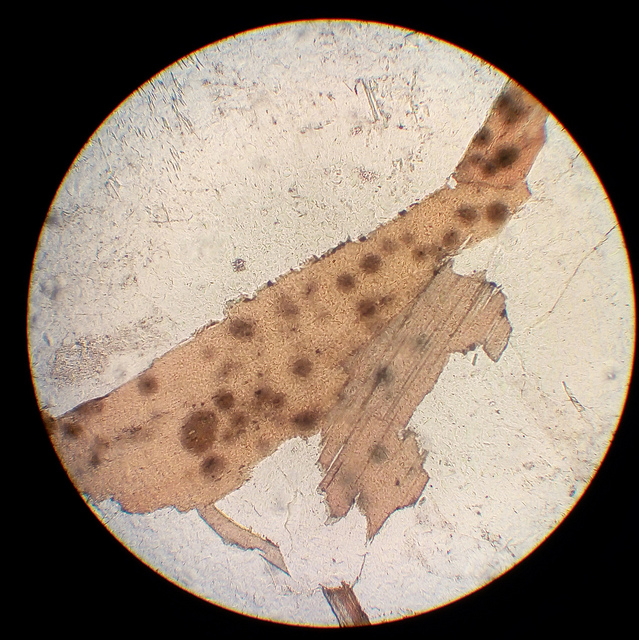 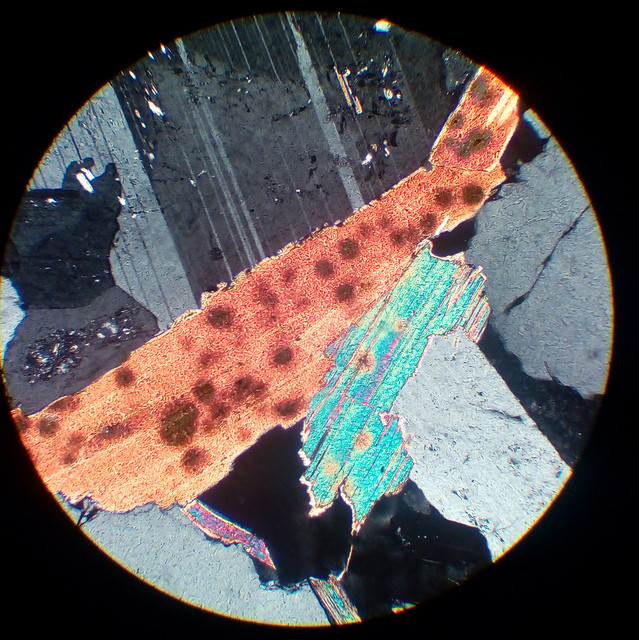 It's biotite. Not muscovite. That's why you have the pleochroic halos in it.

I don't understand why you are saying that the interference colours are like muscovite. First of all, the lack of cleavage suggests you are looking down (or close to) the x axis, so this means the interference colours you see are going to be very low. Let's say 1st order white or brown. And then, it's going to get the anomalous brown colour of the biotite together with it, which is exactly what you see here. Also, muscovite is not brown in ppl. This one is. Therefore, it's biotite.

One doesn't see pleochroic haloes in muscovite, I suspect because the crystal lattice of muscovite isn't conducive to developing inclusions of allanite and other radioactive minerals. I suggest you measure the 2V- to distinguish between muscovite and the paler varieties of biotite. Note that the more magnesian-rich varieties of biotite, i.e. phlogopite, can be very pale brown in PPL.

I don't attach much credence to interference colours because the range of colours in muscovite and phlogopite overlap, and can appear very similar. Also, slightly coloured crystals tend to mask the interference colours, so it may be difficult to judge.

One may ask 'why pleochroic haloes in biotite, but not in muscovite?', as in 2-mica schist. I can't prove it, but it is known that uranium adsorbs onto Fe-rich surfaces of the biotite, so my hypothesis is that adsorbed uranium serves as crystallization foci for adjacent allanite crystalls, which are then enclosed as inclusions as the biotite crystal continues to grow. You won't see this in muscovite because of the absence of Fe.

It is curious that inclusions of magnetite can occur in muscovite, but not radioactive mineral inclusions - at least, not that I have ever seen. I don't know why. Anyone else have any ideas on this?

Not the answer you're looking for? Browse other questions tagged geology mineralogy minerals or ask your own question.

4
How can I normalize this chemical analysis to a mineral with 3 cations?
6
Maps and Faults
5
Mining iron or metals in nature
3
Was there once a glacier over Starcke national park in Queensland Australia?
3
Are there any areas on Earth with purplish-colored soil/sand/rock/land?
4
A sedimentary rock with only minerals
4
Is there a table with decomposition temperatures of common minerals?
6
Does muscovite occur as a contact metamorphism mineral?