Could Global Climate Change increase the average moisture in the air?

Given several hundred years, assuming global climate change results in the melting of the polar ice caps which leads to an increase in surface area of the oceans and an overall warming of the earth (although I'm not quite certain to what extent the earth as a whole could increase in temperature in several hundred years), would the result be an increased amount of evaporated water into the air increasing the overall humidity?

Out of the total water on Earth, only a tiny fraction is held in the atmosphere at any given time. Therefore, the direct effect of melting land or sea ice will not result in an increase in specific humidity.

However, warm air can contain more water than cold air, according to the Clausius-Clapeyron equation. Therefore, the climate warming that causes the ice caps to melt, will also result in an increase in average specific humidity. This is (approximately) an exponential relation (I don't have access to my textbooks right now, but googling saturation vapour pressure water equation yields many forms; I do not include them here because none I found use SI units).

See also the (not very good) Wikipedia article on Vapour pressure of water.

Just to clarify, there's 3 distinct humidity measurements, relative, which is the one we commonly get on weather reports, often just called humidity, absolute and specific humidity.

Relative humidity is relative to temperature and is listed as a percentage of the dew point at that temperature (0%-100%), though in rare instances, greater than 100% humidity can happen. That's a supersaturation event, but it does happen occasionally.

Specific humidity and Absolute humidity aren't temperature dependent and are more similar, but not precisely the same. Specific has to do with the mass ratio of water vapor to air and Absolute humidity has to do with the water content per volume of air. Water vapor can also be measured in PPM, but that's essentially a straight multiple of specific humidity.

Warmer air should lead to an increase in specific and absolute humidity simply because warmer air holds more water vapor and water can evaporate water more quickly in higher temperature, though other factors like wind speed and sunlight may play a bigger role in evaporation than temperature.

Warmer air shouldn't lead to an increase in relative humidity, in fact, due to expected expanding dry areas and decreased snow run-off, and a decline in plant transpiration in a higher CO2 environment, warmer temperatures should probably lead to a decrease in relative humidity over land on average. Over oceans and near large bodies of water, relative humidity should stay about constant but as oceans rise, ocean surface area will increase somewhat and land area will shrink. Because relative humidity is higher over oceans, that will have an increase in the global average. Overall, the global average for relative humidity should rise in some locations, fall in others and over the globe, stay roughly about the same as temperatures rise. Specific humidity and absolute humidity would be expected to increase. (I looked, but couldn't find a specific study or article to back this up), but it's basic logic that warmer air over oceans will contain more water and oceans cover 70% of earth, so it's quite logical that specific and absolute humidity will increase with temperature globally.

Here's a more detailed discussion on this if interested.

Average relative humidity over land varies quite a bit. Notice the cold regions and regions over rain forests tend towards high humidity. Climate change may increase the lighter areas of lower humidity. 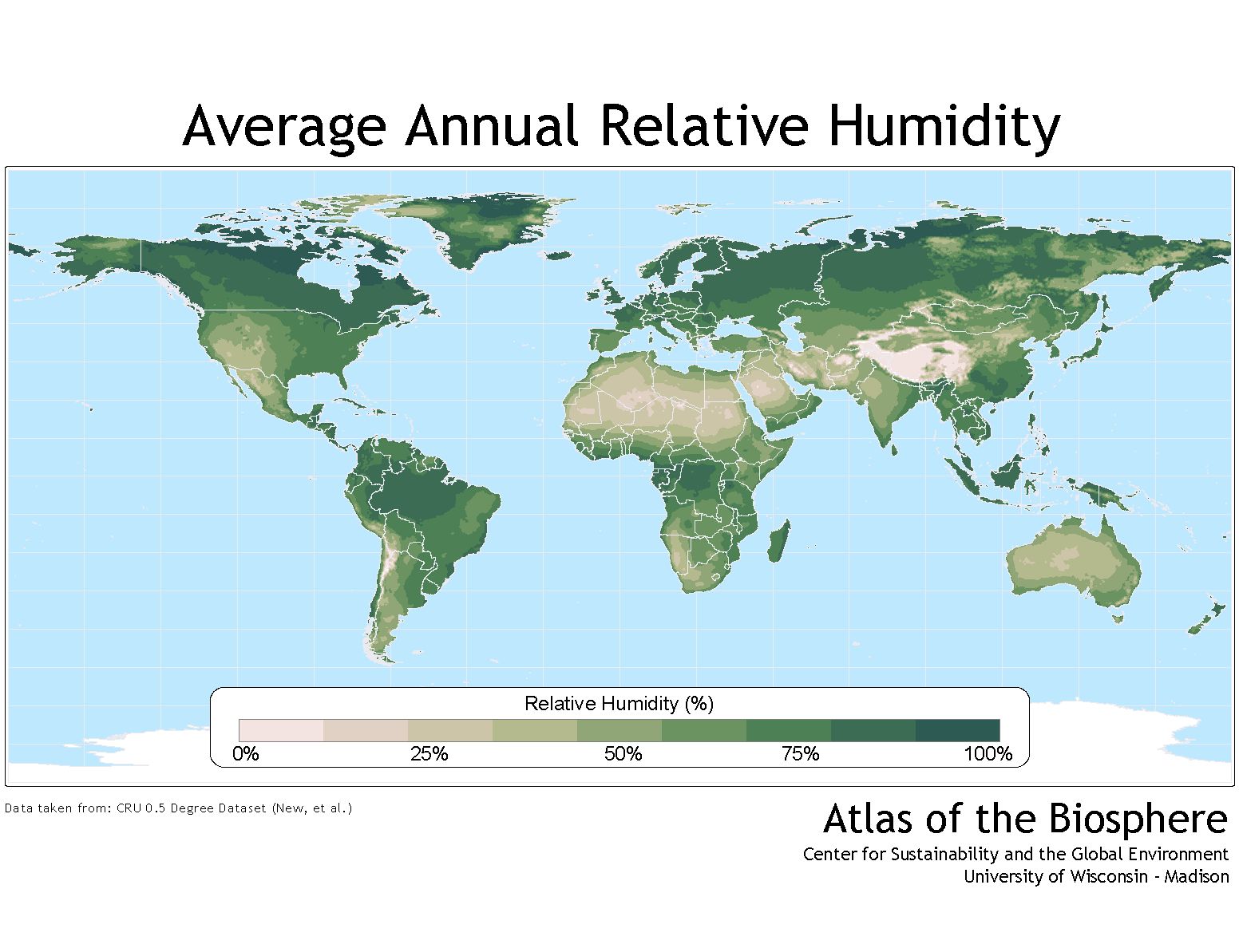 Humidity over oceans tends to be higher, closer to 100% all the time

would the result be an increased amount of evaporated water into the air increasing the overall humidity?

Generally and globally speaking, yes on specific and absolute. No on relative.

All the climate models include humidity and cloud formation and they already account for increasing water vapor in the air as they'd be pretty useless if they didn't. People sometimes say that CO2 is a weak greenhouse gas and water is stronger, and that's true, but Water is everywhere on the Earth and it cycles in and out of the atmosphere on a daily basis, so it's not a driver. The increase in CO2 is the driver. CO2 by itself, everything else remaining the same, probably warms the Earth less than 1 degree. The temperature models that the IPCC puts out include Water vapor and albedo changes in addition to CO2.

I've never seen a model that estimates temperature in several hundred years. I found one for a three hundred, see below. I also think it's unlikely that the icecaps will melt completely as you suggest. Antarctic ice has remained frozen in warmer temperatures than we're likely to see over the next few hundred years. Antarctica began to freeze some 30 million years ago in a much warmer earth, where estimates put the Earth at 6-8 degrees warmer than today.

(Chart is too big to link here, but may be seen here.)

Greenland ice could melt over hundreds or thousands of years. Much of Antarctica will probably stay frozen. Nobody really knows, of-course and accurate predictions of this sort are impossible, but melting of the Greenland glacier over several hundred to, perhaps a few thousand years is reasonably possible where as the Antarctic glacier formed under temperature several degrees warmer globally than the Earth is today and (IMHO) is very unlikely to melt, though it could (and already has) lost some ice around the edges. I think it should mostly stay intact, except in the most extreme warming scenarios.

This chart below is based on RCP forcing which are estimates for increased watts per square meter. The chart implies some leveling off before plus 4 degrees C is reached for most scenarios assuming some effort to begin reducing CO2 emissions by 2040 is successful. 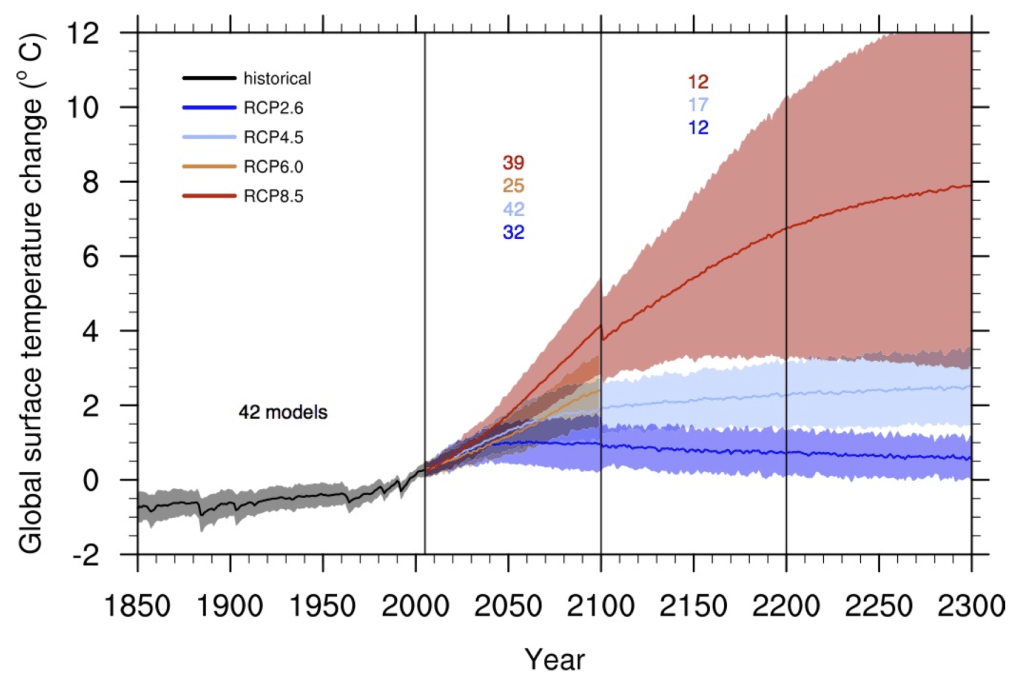 The dark shaded area, RCP8.5, assumes very little effort is made to reduce CO2 output past 2100.

The short answer is yes but, as this blog post indicates, there are many factors and variables involved. In the absence of wind and any variation in pressure, evaporation will increase with both temperature and any increase in the temperature difference between the water surface and the air. However, as the air approaches 100% relative humidity the rate of net evaporation decreases because there is increasing condensation. When 100% relative humidity is reached the evaporation and condensation balance.

An interesting consequence is that, if it were true that radiation from increasing water vapor were actually raising the surface temperature (and increasing evaporation) then the whole globe would end up being at 100% relative humidity and we could expect continuous hail, rain or snow everywhere. Fortunately, we can use the laws of physics as in this paper to understand why an increase in water vapor will actually lower the surface temperature and increase that in the upper troposphere so as to make the temperature gradient (aka lapse rate) less in magnitude, whilst maintaining radiative balance between the incident solar radiation and the outward radiation. There is also a study in the Appendix of that 2013 paper of mine which confirms this physics in that it shows that more moist regions have lower mean temperatures than drier regions at similar latitude and altitude. Hence there will not be any runaway warming effect due to increasing evaporation and levels of water vapor.

3
Change in vapour pressure due to climate change

9
Any historical examples of destructive climate warming?
4
Winter in the Northern Hemisphere in July? Can anyone explain it?
3
What was the percentage of land mass in prehistoric times when temperatures were high enough that we had no ice caps?
1
Does extrapolating current CO2 trends indicate 7632 PPM CO2 and 14C temperature anomaly within 200 years?
2
Are 60C heat waves predicted by 5C of global heating? (The worst consequence of global heating)
0
Doesn't increased human activity add to heating the atmosphere directly?
5
What effect does climate change have on the Earth's rotation?