Was there once a glacier over Starcke national park in Queensland Australia?

I was randomly exploring Google Earth when I came across some sort of rock formation in northern Australia. The location of the rock formation with respect to Australia is shown below. It is in or near Starcke national park. 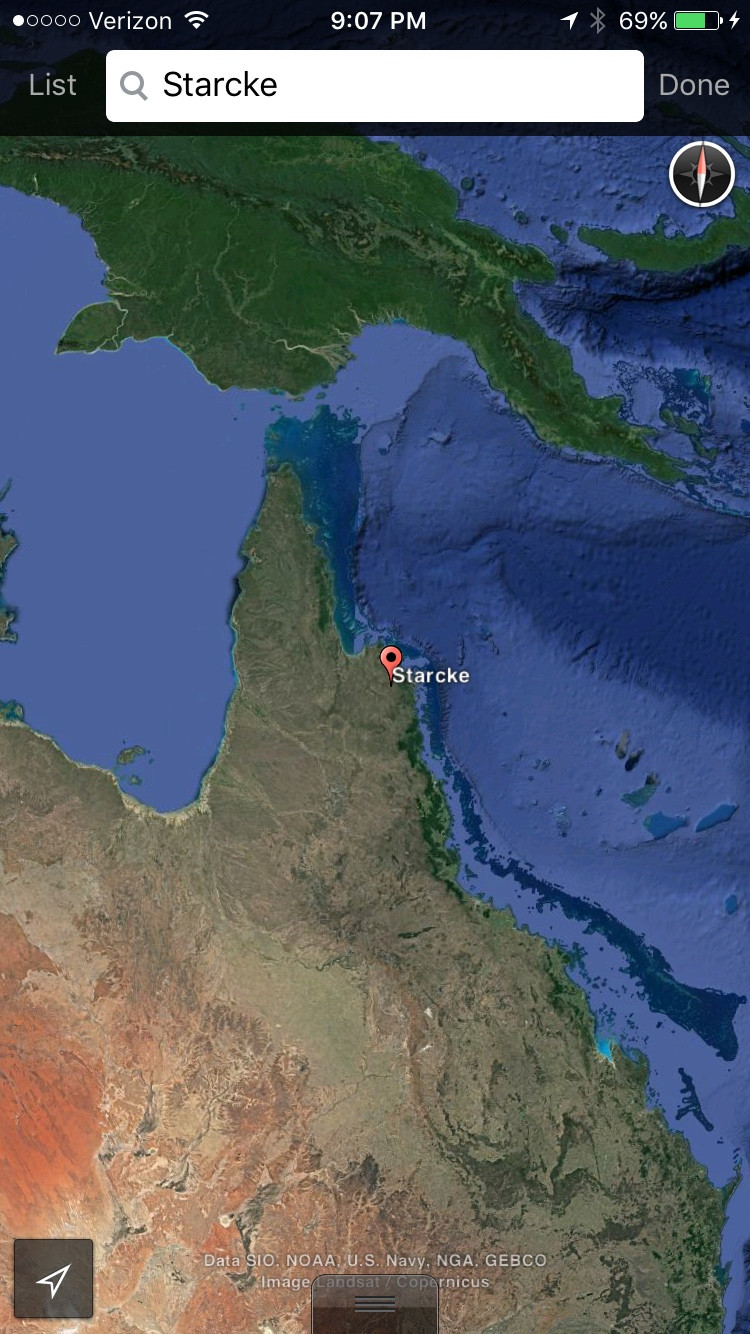 Of course it seems absurd (to me) to think a glacier could have existed there anytime even remotely recent in geologic history. But there's a rock formation there that looks like it has been carved up by a glacier. Here's a screenshot of google earth satellite data of the rock formation in question: 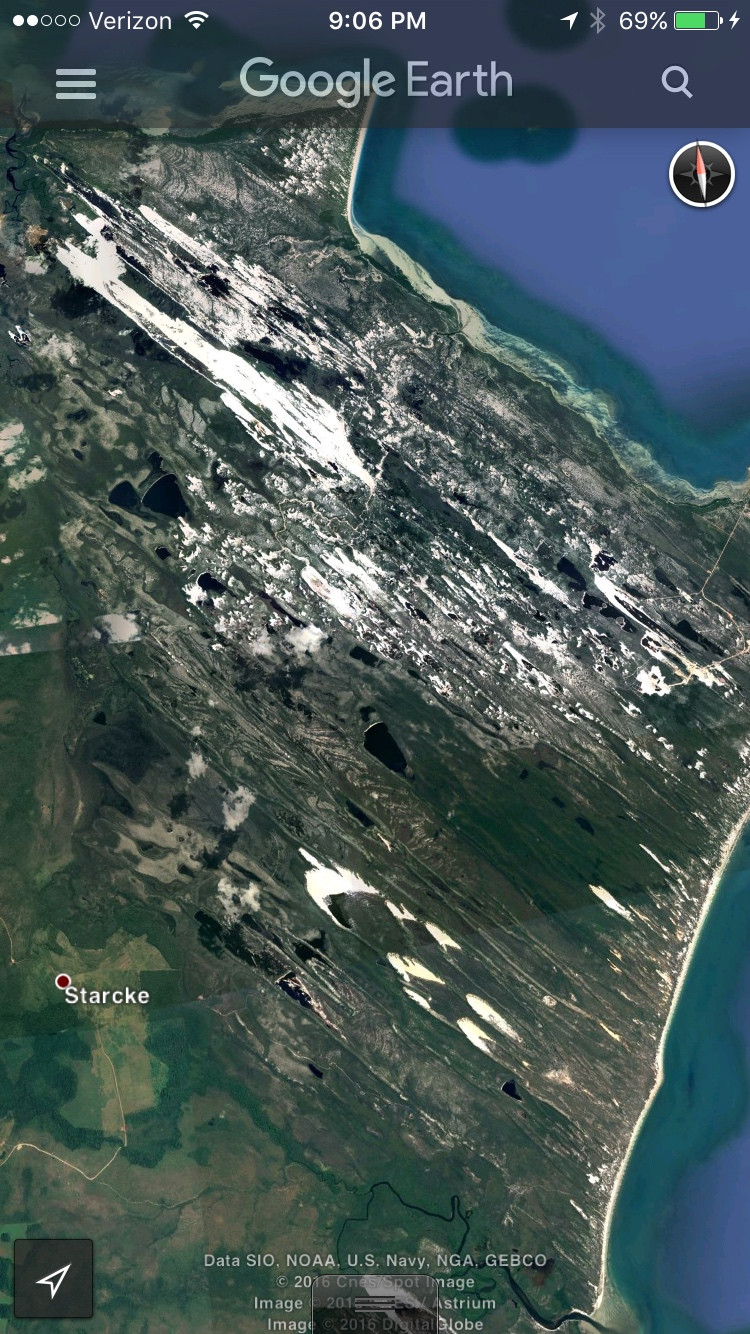 Notice the clear distinction between the "carved land" and the vegetation to the south and west, this is one of the traits I find confusing about this structure.

I tried researching the park to see if there is a scientifically accepted origin for this formation, but all I learned is that it is apparently made from sandstone, and the region is noted for being very rugged.

I'm not a geologist, so I might be missing some important info that could help, but I have at least a basic understanding of geology from a few electives I've taken in college. I know that glaciers carve up the land, and when they retreat, they leave behind a mess of jagged rocks and lakes that are aligned in the direction of flow of the former glacier. The above picture seems to show just that: there is a clear sense of direction of the lakes and rocks.

Additionally, I was able to find one other similar formation about 400km (~250 miles) north east up the Australian coast (measured as a straight line) near the Sir Charles Hardy Islands. I would show a pic of that as well, but I'm limited because I'm new here.

Other than these two formations, I was unable to find any other examples. Both formations highly contrast their surroundings and both seem to be "smeared" in roughly the same direction.

For reference, look closely at the land in northern Canada and Europe, where glaciers are known to have existed geologically recently. (Again, I had pics but I can't post them.)

Does anyone know how the formation in question was created? If not does anyone have a strong educated guess about what might have caused it? Thanks in advance.

That region forms part of the North Australian Craton and the underlying bedrock is in the order of 1.8 billion years old. The bedrock appears to be overlain by the Isa Superbasin during a period of deposition from 1.575 to 1.665 billion years ago and underwent the Ewamin Orogeny (1550 Ma) to form the Georgetown Inlier.

About 500m years ago the Eastern seaboard of what is now Australia was under water and over the next 250m years continental subduction took place and Eastern Australia was geologically analogous to modern day Japan and China with an inland sea and a volcanic arc stretching from north to south. What was once this inland sea is now part of Australias rich coal basins, which stretch from Collinsville in Quensland all the way to Tasmania and they have also been correlated to coal deposits in Antarctica.

While all this was taking place, there was, amongst other events NE-SW compression of the continental crust along the Tasman Line which may have contributed to the geology in your picture. While I'd take a guess and say that many of those structures are folds (and they look like them too) I'd really need to put my boots on the ground and have a good look before I could say for sure.

Here's a link to an image of The Tasman Line.

A guy called Nick Direen wrote some good papers on the Tasman Line. You might find more info if you google him.

Further to what I've written above, I've looked at the QLD government geological maps online at: https://minesonlinemaps.business.qld.gov.au/

As mentioned by Gordon, the surface geology is comprised of Quaternary age sand dunes which is indicated by the yellow colours. The purple areas are strata that is Devonian age and the small patches of pink are intrusive granites, which are typical of Eastern Australia. The sand dunes overlay the older rocks.

How much the underlying bedrocks influence the sand dunes? Without further research and boots on the ground, I'd have difficulty in saying. 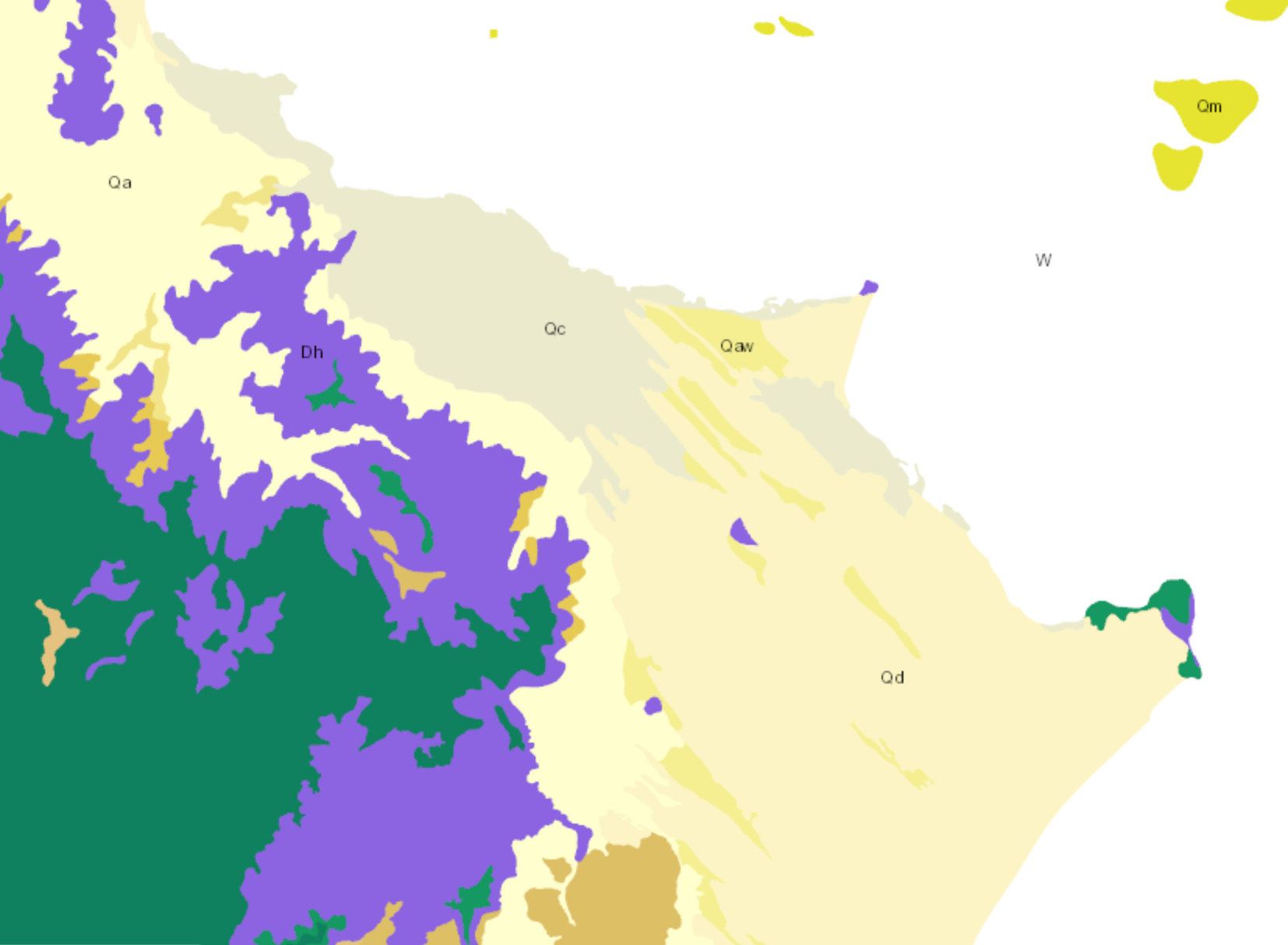 You are quite correct. At that latitude and elevation these can't be recent glacial features. Also, the lineations are too consistent to be glacial. In fact the features you note are Holocene and Pleistocene beach ridges. From Google Earth it appears that at least some of the ridges may be seif dunes, as there are also elongated barchan type dunes, which are often associated with seif dunes, and share the same axis, aligned with the prevailing wind. The inter-dune lakes also share the same consistent lineation.

Not the answer you're looking for? Browse other questions tagged geology rocks planetary-science glaciology or ask your own question.

13
Converting glacier volume to mass: what ice density to use?
10
Siberia (Beringia) during last glacier period
4
Is glacier growing a hoax?
15
How will sea level rise be distributed across the globe?
2
What formed this rock slide formation near Hyndman Peak Idaho (photos)?
1
Arabian Desert rock formation
6
What is this geological formation in the Santa Cruz mountains that looks like a cave interior?
3
Internal rocks in glaciers