Causes and concentration of red rain of Kerala

The red rain phenomenon in Kerala, India has been reported several times in history (1896, 2001, 2012). The color of the rain seems to be associated with the presence of airborne spores of the algae Trentepohlia annulata. My questions are: 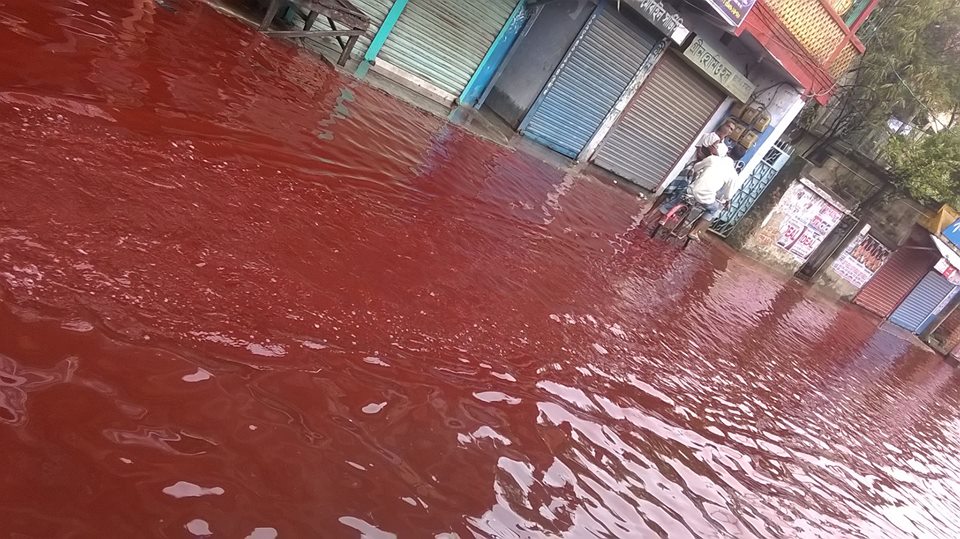 Despite the obvious red colour Trentepohlia annulata and numerous related species are blue-green algae. The red colouring comes from beta caroteine and related natural pigments. There are very many such common pigments in nature, comprising scores if not hundreds of compounds, ranging in colour from yellow through orange, red and purple, eg. from lichens on wood bark, carrots, saffron, beetroot, and certain bird feathers/beaks - to name but a few sources. The red colourant masks the natural greenish hue of the original organism. It is a strong colouring compound which is why beta-caroteine and its derivatives are sometimes used in food colouring.

As to the concentration of algal spores, this is difficult to determine because the colour intensity is a function of the pH, exact chemical species of pigment, biological viability of the spores, and presence/absence of co-variable interacting ions in the water. As a very rough guide I would estimate that the concentration of pigment (not the concentration of spores) is likely to be in the order of 20 to 200 mg/l. For a bit of fun, you could get some beta-carotein-based food colourant and experiment on concentration and colour vs. pH.

Trentepohlia annulata and related algal species are pretty much ubiquitous in wet tropical and subtropical environments, but they don't like cold weather. The red colour in your photograph is extraordinary and very unusual. I would assume that conditions of nutrient availability, pH and temperature would have to be 'just right'.

My last comment is pure conjecture on my part - and I may be way off beam here - but maybe the intense red colour could be brought on by the physics of raindrop formation. If very moist warm air, rich in T.a algal cells was rapidly lofted in a tropical convection cell, the sudden cooling could kill off the algal cells, thereby rupturing the cell membranes, and triggering catastrophic release into solution of carotein-related pigment into resulting raindrops, which would normally pass unnoticed. Further concentration could occur by evaporative reduction of raindrop volume, especially if most of the rainfall dissipated into the atmosphere as so-called 'occult rainfall'.

Not the answer you're looking for? Browse other questions tagged precipitation rainfall or ask your own question.

16
How do urban areas affect rain?
8
How can there be a hot summer with rain and no thunderstorms and lightning?
5
Need help understanding rain rate formulas from drop sizes
3
How is Doppler radar used in rain prediction?
6
How much rain falls on the Earth each year?
3
Circular rain cloud observed in rain radar
0
Is there a way to approximate the density of air during rain?
0
Tipping bucket rain gauge measurement, normalizing
3
Find optimum number and location of rain gauges