Is it possible to infer the depth of a river from the shapes of the islands and the banks?

Look at the photo below. Presumably, the river bed is a smooth shape. Therefore, it should be possible to infer the depth of the water from the photo, right?

I am not even an amateur of geo-science.

I am willing to listen to the experts. 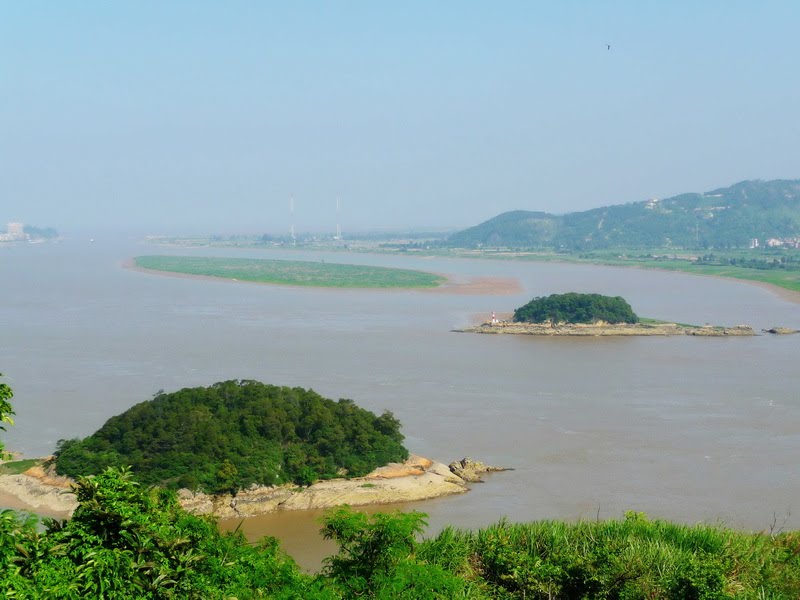 The island morphology isn't necessarily an indication of the river's depth because the river can be bimodal, with shallows and deeply incised trenches. One thinks of the River Congo which has many islands, but depths of up to 220 metres in its main incised channel. That said, however, if the river has a multi-channel, heavily braided morphology, as in the Waimakariri in New Zealand, or the Brahmaputra in Assam, then one can be fairly certain that the intense sediment load would have filled in any deep pools (excluding local scour in sharp bends, caused by super-elevated flow). In such cases, one may assume a shallow river profile, governed only by storm-flow peak stages. Where there are few or no islands coupled with geomorphologic indications of rapid cut back or rejuvenation, such as the Mekong upstream of its delta, then one may suspect very deep channel profiles. In general though, islands and bank morphology are not reliable indicators of a river's cross section.

Not the answer you're looking for? Browse other questions tagged geology geography rivers geomorphology or ask your own question.

25
How can the following equations for meandering rivers be theoretically obtained?
15
How and why do these tree-like river structures form?
0
Flooding lakes in geography
10
What is the temperature of the flowing water in icy river?
1
What kind of mine pit in northeastern Minnesota could make residue that turns water turn bright red?
4
Classification of rivers according to width
2
mountain database of elevation and distance from saddle (as a proxy for gradient)
7
Could the Grand Canyon be flooded by the ocean if it got deep enough?
7
Origin of Andaman and Nicobar islands