Was Judea as desertified 2000 years ago as it is now?

The ancient fortress of Masada is currently so dry and forbidding that is hard to imagine anyone living there. Was the climate in the surrounding area more wet 2000 years ago, or was it as much a desert as it is now?

There has always been a strong north-south rainfall gradient from approximately the Golan Heights (high rainfall), through Judaea and southwards into the arid Sinai desert. We know that this gradient once had a higher rainfall because there are abundant rainfall harvesting and groundwater collection structures, built by the Nabatean civilization about 400 BC to 100 AD. They are now long defunct because of climatic desiccation, but are characteristic of dry regions with marginal cultivation. Similar working structures can now be found in Oman, Iran and parts of north Africa. So it is reasonable to deduce that the region was once significantly wetter.

In addition to this overarching climatic gradient there is a very strong local rainfall gradient from the Israeli Highlands in the west, about 1100 mm, to the Dead Sea-Rift Valley in the east which receives about 100 mm per year. This is a rain shadow effect from the prevailing Mediterranean airflow to further east into the Arabian desert - obvious from the vegetation density on Google Earth. Masada currently receives about 200 mm per year, but it is very erratic, with huge inter-annual variability. One study of the Negev and adjacent dry areas concluded that the spotty distribution of annual rainfall doesn't average out - at least, not on any time-scale useful to humans. Because of its position in an intense rain-shadow, Masada will always have been dry.

There are two potential sources of water supply to places like Masada; springs, and ephemeral (very unreliable) flash floods. The springs are groundwater which has percolated through the limestone massif from the Israeli highlands around Jerusalem,. Hebron, etc. There are currently no springs in the immediate vicinity of Masada. There may once have been a spring under higher water-table conditions, but none that we know of historically.

The solution used to supply Masada was to build two dams in canyons draining the Israeli highlands. Ephemeral flash floods were thereby intercepted and conveyed by gravity-drained aqueducts to tanks dug deep inside the Masada citadel. These tanks were of about 30 to 35 cubic metres capacity, so even allowing for evaporative and seepage losses in the aqueduct, the water supply could be topped up - provided the frequency of flash flood was sufficient. Even today it is likely that flash-floods would have been of adequate frequency. Under the slightly wetter regime of 2000 years ago, it is near certain that there would have been more than sufficient water every year.

Unfortunately, there are no rainfall records from so far back, but some interesting general climatic inferences may be found in Issar A.S. (1990), 'Water Shall Flow from the Rock'.

tldr: It was also dry back then, which is why the people living there were rebels and not the rich elite.

I'd like to add a few points to Gordon's answer.

First of all, Masada is on the western edge of the Judea Desert, and therefore it is dry now and was extremely dry back then. The water supply to it was based on abundant water reservoirs that were built in and around Masada to trap flood water. Here is one (source): 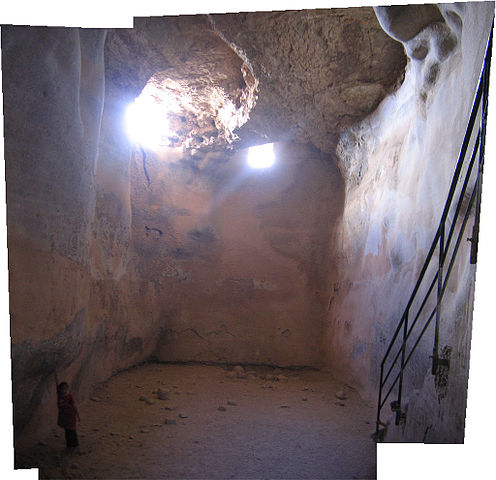 It doesn't rain a lot there, but once it rains, it rains a lot in a very short time. Being a native of the Negev Desert, I know this very well. They just had to trap all of the water, and then you have lots of water for long enough.

Now, you are asking:

The ancient fortress of Masada is currently so dry and forbidding that is hard to imagine anyone living there.

This is exactly the reason it exists. Masada wasn't a holiday town for the rich, and people didn't think of it as a particularly good place to live. Even the nearby modern town of Arad is considered as a very remote and unwelcoming place to live in by most Israelis. Masada was a place where outcasts, outlaws and rebels lived. The people living there during the famous Roman siege were not the mainstream Jews living in most of Judea at that time. They were considered outlaws even by the Jewish administration in Jerusalem and elsewhere.

The dryness and remoteness of the area was an asset: no one even wanted to hunt them down over there. That is, unless you get someone really pissed off (such as the Roman Empire) and they decide to end it in the famous siege. The dryness was also helping the defenders: they had access to the water reservoirs while the attackers did not.

Gordon Stanger covers the climate aspects well in his answer, but I thought I'd chime in with an answer to the "was it as much a desert as it is now?"

While I'm not aware of any archaeological evidence for the agriculture in the land surrounding Masada at the time of the siege, there are several factors that may have, at that time, made the area less 'deserty.'

There are two in particular I want to mention. The first are qanats. This technology spread from Persia around ~500 BC and quite impressive ones were built by the Romans in dry places, like this one from modern day Jordan.

Masada is in a cliff overlooking the Dead Sea, but the top of the fortress is only about 60 meters above sea level; the surrounding land is much lower. This puts it in a good position to receive water from nearby groundwater at higher elevation. As can be seen in Google Maps, The land rises 200m in 2.5 km to the West, and 400m in about 5.5 km. Google Maps even indicate the course of several wadis that flow in the general direction of Masada which could be used as the basis for a partially underground irrigation system.

Qanats take a lot of work to build and maintain, but in a land where there is cheap labor and little water, it can be worth it to build them. The Middle East at the time had plenty of desert adapted trees that could thrive with a little irrigation (almonds, olive, carob, date, pistachio; all mentioned in the Bible), so it is entirely possible that there were groves of desert trees in the land around Masada.

This brings us to the second point: tree cover. The tree cover currently existing in the area around Masada (i.e. none) doesn't have to be the tree cover that was always there. Trees being rare in the southern Levant, they were always under pressure for use as firewood, and their regrowth was limited by grazing, especially by goats.

There are several trees (large shrubs really) that can grow in such hot and dry conditions, as they are present in the rest of the Negev desert in Israel, such as Acacia, Pistachia, and Tamarix. Acacia in particular may be a keystone species, such that higher, ancient levels of tree cover could have encouraged a generally greener landscape.

In conclusion, while the area around Masada is barren now, it does not have to have been 2000 years ago. There were labor intensive irrigation techniques and tree crops available to make successful farming a possibility, and lower firewood and grazing pressure from a lower population may have allowed the wilderness areas to have been greener than they are today.

They found parchment scrolls and date-seeds (one of which was germintated!) from 2000 years ago in the Judea desert, indicating the climate was extremely dry throughout that period, allowing them to be preserved.

Not the answer you're looking for? Browse other questions tagged climate-change paleoclimatology desert or ask your own question.

23
What was the Amazon like during Green Sahara?
13
When will glaciation resume? Has global warming delayed return to global cooling?
3
Is evapotransporation accounted for in climate models?
8
Are we now and/or have we been in the RCP8.5 scenario?
4
Was climate change inevitable anyway, or is there more to it?
4
3 Billion years ago, the earth is covered with Carbon Dioxide. Where did it go?
9
What caused peak CO2 to rise, starting about 400,000 years ago?
1
Have we looked for human-like signals in the geological record?
7
Why is it that "With higher CO2, the dry gets drier and the wet gets wetter"?
17
Could the Paleocene–Eocene thermal maximum have been caused by intelligent life forms?