How to identify low or high pressure area

If rain is due to the flow of humid air from a high pressure area to a low pressure area, without the use of devices, technology or mass media is it possible to detect regions of high or low atmospheric pressure and know their locations?

For example: from my terrace or open land - and how do I spot regions of low or high atmospheric pressure?

Because you specifically asked about winds and pressure, there is a fairly applicable rule of thumb. It's called Buys Ballot's Law. Basically, if the wind is to your back (coming behind you), and you're in the Northern Hemisphere, generally low pressure is to your left and high pressure is to your right. This graphic from http://www.maiamarinelli.com/ illustrates it: 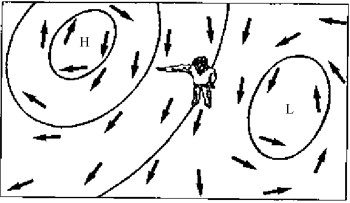 However, do note that Buys Ballot is really an imperfect estimation. There's three big caveats/adjustments to consider:
[in all following description, replace left with right (and vice versa) for Southern Hemisphere]

So all that put together:
If indeed you can get away from those big buildings, are fairly removed from the regional impacts of mountains and smaller nearby terrain features, and ideally can escape areas with dense foliage... then if the wind is coming from behind you, you can be almost certain that large low pressure is to your left or front left (in the NH, right/front right in the SH)... if you can find the wind direction.

(And if there is a great deal of wind... well maybe you should just get inside, and turn on your tv to find out when the big tornado/hurricane/winter storm is going to end!)

Not the answer you're looking for? Browse other questions tagged wind sea-level rainfall barometric-pressure air-currents or ask your own question.

17
What is the range of possible atmospheric pressures on the surface of the Earth?
9
Why do certain areas on Earth have a higher or lower air pressure at sea level?
11
How are low pressure zones tracked across the ocean?
2
Modelling sea levels with gravitational parameters
1
Why is the Atlantic anticyclone an area of high pressure if it's the warmest spot on the planet?
6
Can strong winds significantly lower ocean surface levels, or is it really the static pressure differences?
2
Do high pressure systems draw air towards them?
0
When it is said that air moves from warm object to a cold object, how is it possible that air moves from high pressure area to low pressure area?
1
If storms form above low pressure regions, why doesn't the eye of a hurricane, a low pressure region, have any storms?
1
At what point is the atmospheric pressure considered to be high or low?