Does the strength of Earth's magnetic field influence its climate?

The strength and orientation of Earth's magnetic field varies with time.

Does this variation of the magnetic field have any influence upon climate? For example, is there any correlation between ice ages and strengthening or weakening or orientation of the field?

There is no significant geomagnetic influence on the cycle of glacials and interglacials. I think the easiest way to determine this is to consider geomagnetic reversals. A reversal obviously involves the largest possible change in the direction of the magnetic field (a full 180°). It also involves some of the largest changes in field intensity, because during a reversal the field intensity drops to a small fraction of its usual value before regrowing to ‘normal’ levels (e.g. Raisbeck et al., 1985). So, if we're expecting geomagnetic field behaviour to have any influence on climate, we'd expect the most obvious effects to appear at reversals.

We can look for this effect by comparing a δ18O record (which gives a proxy for global temperature and ice volume) with a record of magnetic reversals. Here's a figure of the LR04 stack from Lisiecki & Raymo (2005), showing those two records for the past ~5 Myr: 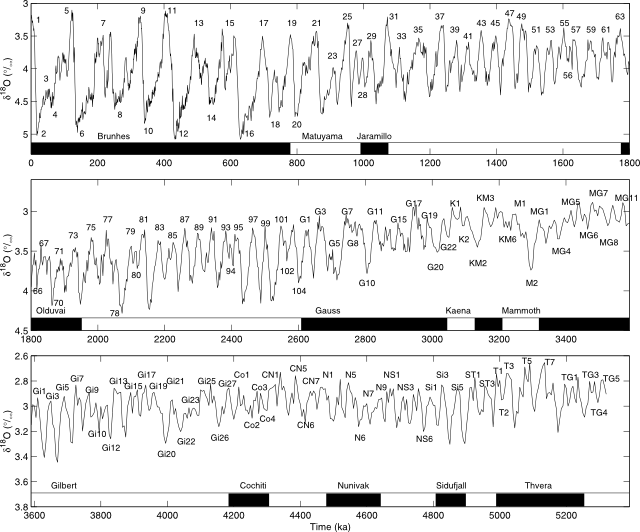 As you can see, nothing spectacular or even noticeable happens at the reversals (the black/white boundaries along the bottom of the plot). They don't seem to correspond to any particular point in the glacial/interglacial cycle.

Of course, it's likely that geomagnetic field strength has some influence on climate, and that these effects are simply swamped by other influences on the spatial and temporal scales we're looking at here. The first possible effect that came to my mind was the geomagnetic field's influence on the amount of incoming cosmic rays, which in turn has an effect on cloud formation. And sure enough, it turns out that Vieira and da Silva (2006) have found such an effect. But I suspect that once you start looking at >10kyr timescales and global signals, such effects get averaged out.

As Pont says, there's little evidence that the magnetic field has no observable evidence on the long term climate of earth, there was a recent study which drew a link between the solar wind strength and the frequency of lightning storms. Given that the amount of incoming charged particles from the solar wind that make it into the atmosphere is dependent on the strength of the magnetic field. This is however short term weather not climate, however it does show that the strength of the magnetic field does have an effect on the atmospheric systems, albeit not in the long run.

You might want to study the QBO before hand-- but yes-- geomagnetism plays a factor in long term climate.

Evidence of this is already taken place with earth quake activity on the rise and global temperatures trending lower post year 2016.

Not the answer you're looking for? Browse other questions tagged climate geomagnetism or ask your own question.

2
What are the arguments FOR Climate Change influenced by the drifting of Geomagnetic Poles?