How does moveout correction work in seismic reflection profiling?

When you take a seismic reflection profile you take multiple shots and then stack them together around a common midpoint. Due to the extra distance travelled by the wide angle shots there is a moveout on time profile which you have to account for. Apparently, in order to apply the moveout correction you have to know (or guess) the velocity structure of the layers. I am confused as to why this is. Surely you know the extra distance travelled from the geometry of the shot you know the extra time because it is recorded in the arrivals so you should calculate the average layer velocity after lining up all the arrivals at the same time, not the other way around.

If someone can provide a detailed explanation of how common midpoint stacking and the moveout correction works that would be very helpful.

The offset is measured in meters, but the depth is still measured in time. The extra distance the wave have traveled to a longer offset is therefor also seen as an increased time in the CMP-gather (Common Mid Point) and the extra time depends on the seismic velocity of the layers.

If the velocities are high, the moveouts are short. The longer offset, the longer distance the wave have traveled through the layer and the larger moveout correction is needed before stacking. Sometimes we mute long moveouts as they tend to be distorted and noisy.

When we stack the traces in the CMP-gather, we need the reflectors to be at the same time and to do that, we perform NMO-correction (Normal MoveOut).

To find the right velocities to use for the NMO-correction, we can do a semblance analysis to get the NMO-velocity. That is to simply try possible velocities and see at what velocity the reflector in the CMP-gather is aligned horizontally and gives the highest peak when summed for all traces.

The figure shows a synthetic CMP-gather to the left. A semblance velocity scan is performed and the peaks are shown in the middle plot. The velocities are picked as shown in the graph and are used to NMO correct the CMP-gather as seen in the seismogram to the right. When this is stacked, the reflectors will add up and the noise will be suppressed. So in theory, we don't need the velocity beforehand to perform NMO-correction. The moveout can be used to calculate a NMO-velocity model.

The figure is from Madagascar development blog. 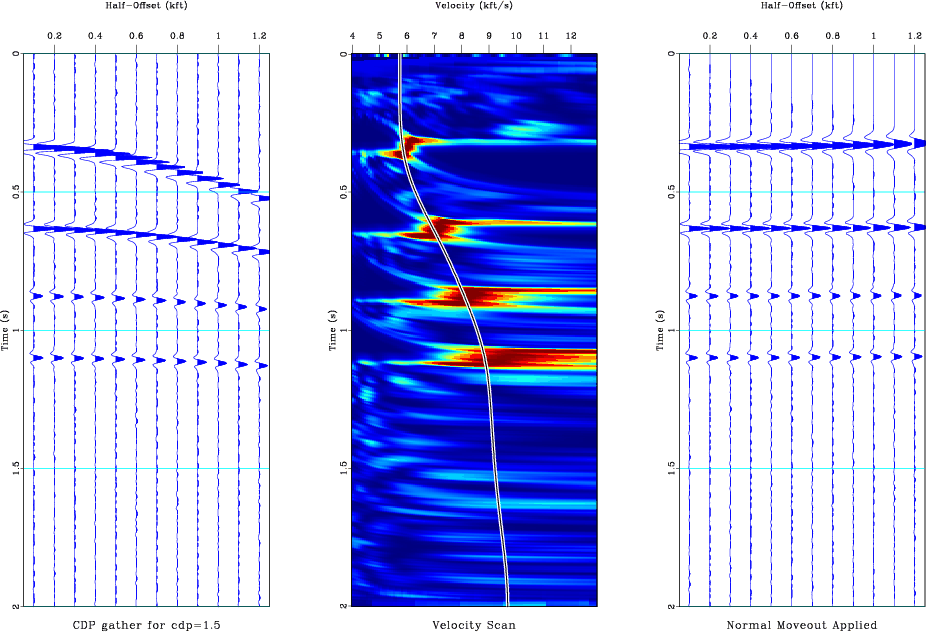 However, if we know the velocities, eg from borehole data or refraction studies, we don't need to rely on computing heavy semblance velocity scans and uncertain velocity picking. Data are rarely so neat as this synthetic example shown here. Also, it's impossible to derive the gradually increasing velocity in a formation without internal reflectors.

This is the basic application for stacking, but there is much more to it, you can read more e.g. here.

Not the answer you're looking for? Browse other questions tagged seismology data-analysis or ask your own question.

10
How does one determine the optimum offset in a seismic survey?
6
Why is it necessary in seismic imaging to calculate an image of reflection coefficients when one of the inputs is the velocity model?
7
How to interpret seismic interferometry data?
6
What is the relationship between raw seismic data, CMP Stacking, NMO & Machine Learning
6
How does multiple layer seismic reflection work? How do we distinguish arrivals from different layers and their velocities?
0
Where can I find broadband seismic reflection data?
1
What would be the phase shift and polarity of a seismic wave upon reflection
1
How do I find the Datum (Diurnal Correction) number for a Magnetometer