Why does the temperature rise when it is snowing? Is it due to:

Snow fall can occur under several conditions. In this I am assuming conditions typical for mid to high latitudes. Association with cold-warm fronts are probably most common. Snow fall in mountainous areas can be associated with orogenic clouds and precipitation, when air is raised due to topography creating conditions for precipitation. In addition it is possible to have convective precipitation although such conditions are much more common during summer conditions yielding rain (and when severe e.g. hail).

So when snow fall occurs in association with warm fronts, one could expect a warming since warm air replaces the cold when the front s passing. My guess is that it is this that you have experienced. However, since it is also possible to obtain snow fall during the passing of a cold front the opposite may occur. The orographic conditions concern a more steady situation where the air is affected by a mountain which is stationary so I would not expect large changes in air temperature unless the air moving across the mountains itself changed temperature for one or another reason. Convective snow fall would not likely yield marked changes in temperature as I see it since the snow would be created by vertical movement of warmer air, cooling to form the snow. I would rather expect a slight cooling, similar to what happens under a heavy rain shower in summer.

Addressing your hypotheses in order, I'll start with (1) cloud cover. Here you can differentiate firstly between day and night time. While during the day, clouds will reduce heating of the ground by means of reflection of incoming solar radiation, during night, the clouds are the main contributor to thermal back radiation towards the surface and absorption of radiated heat by the surface. Thus, clouds rather balance the diurnal temperature curves that induce a warming effect. 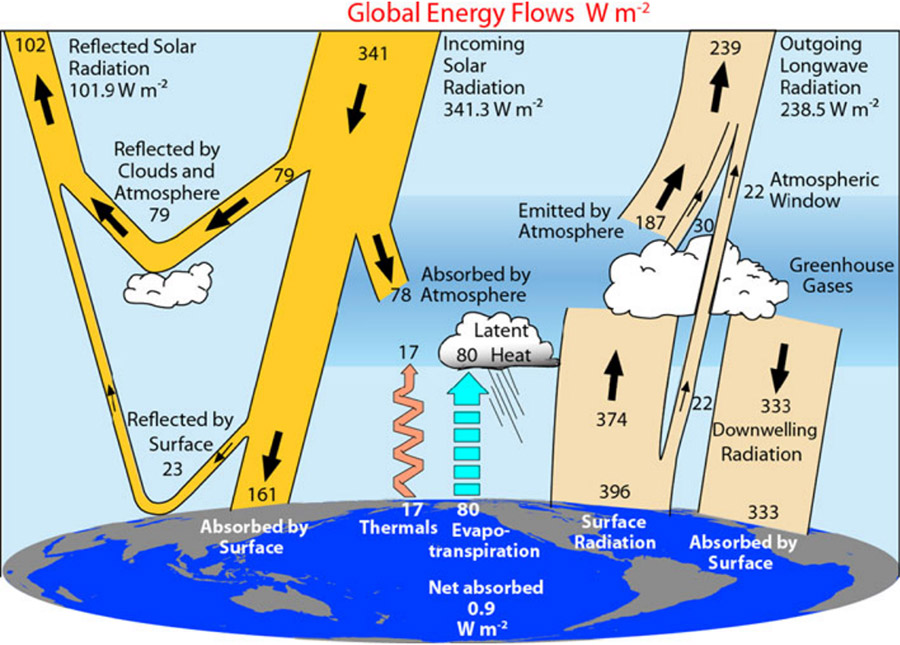 (2) it has been already mentioned in another comment, that precipitation happens due to any sort of uplift, hence cooling of air and condensation to form precipitation as snow or rain. Now, what you describe, warming as a consequence of snowfall, can in my perspective be attributed to the condition of a warm (humid) airmass overpassing a cold (dry) airmass. Due to its lower density, the warm air is, generally speaking, pushed up over the cold air. Due to this cooling effect we experience cloud formation and, with elevated water vapor concentrations of the overpassing air mass, precipitation (e.g. snowfall).

Now, the important phenomenon in this condition is the overpassing of the warm airmass. This induces a general heating of the underlying cold front while continuosly loosing latent heat trapped in its water vapor and passing it off as snowfall or rain, thus heating the underlying atmosphere. The important factor is the contiuned energy input of the overpassing low pressure air mass. This can, if the conditions are right, lead to continued snowfall, which eventually will turn into rain, if the base temperature is close enough to zero.

In opposition, a cold front "wedging" into a warm, low pressure airmass, condensing the water vapor as rain or snow and leaving a cloudless high pressure area in its wake, will become actually colder after the initial snowfall, which will be also of much shorter duration (some hours of snowfall) 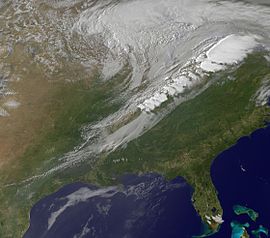 I'm not too sure of the connection between precipitation from the uplifted warm air and heat transfer to the cold airmass, though it does seem logical to me. Any thoghts on that topic?

I don't know if it actually gets warmer. I've never seen evidence for it, so a source for the claim would be nice. But I have heard the belief that it does. It often FEELS warmer for two reasons. First because rain and snow are caused when warmer air meets colder air so at least 50% of the time it is actually getting warmer.

And secondly there is sudden drop in humidity caused by precipitation, and cold dry air feels warmer than cold humid air because it transfers heat slower. Although this effect tends to only be be noticeable if the air is above freezing.

Add both of these together and sprinkle in some confirmation bias and you have the common belief that it always gets warmer, when it doesn't.

Now transforming water vapor (a gas) into a solid releases energy. The same thing happens when it rains. In both cases the effect is minor and would not be felt at ground level.

Water vapours become snow at - 4° C. When it falls on earth, it becomes ice at 0°C, thereby making the atmosphere warmer by 4° during that period. Although other factors are also involved

Not the answer you're looking for? Browse other questions tagged temperature snow or ask your own question.

13
Dry atmospheric temperature profile (dry adiabatic vs. isothermal)
5
Why doesn't it snow even when it is below freezing?
11
Snowing when the actual temperature is around $\small\sf9^o$ Celsius
10
Does the global temperature vary daily (hotter and colder days)?
6
What factor(s) could cause this sort of temperature increase, mid-night/early morning?
3
Why does relative humidity drop if I open the window in winter? What about the temperature drop?
3
Snow on a relatively warm day
7
Why is my intuition wrong about the significance of a few degrees' temperature rise?