Is there any correlation between La Niña/El Niño and seismic activity?

I've read in the past that extreme precipitation levels may have an effect on seismic activity, and wondered if anyone has ever analysed the La Niña / El Niño cycles to see if there are any correlations with seismic activity in the area affected by the phenomena.

There is a case study from Environmental Science entitled El Niño: A Link among Atmospheric, Oceanic, and Crustal Circulation? that discusses the correlations between seismic activity and El Niño cycles in certain areas of the world, that have been documented:

A geophysicist, Daniel A. Walker, hypothesizes that a different sequence of events produces an El Niño event. Walker says that the thermal input to the oceans comes from Earth’s interior. This hypothesis is based on an intriguing correlation of seismic activity under the eastern portion of the Pacific Ocean near Easter Island and the onset of El Niño events. This correlation can be used to illustrate possible linkages among the physical systems of planet Earth and the difference between statistical correlation and physical causation.

The East Pacific Rise is located west of Easter Island. Along this rise, tectonic plates move 160–170 mm (6.3–6.7 inches) per year. This rate is one of the most rapid in the world. As a result, seismic activity along the East Pacific Rise has been studied extensively for more than thirty years. During this period scientists have tracked the number of earthquakes and the amount of energy they release. 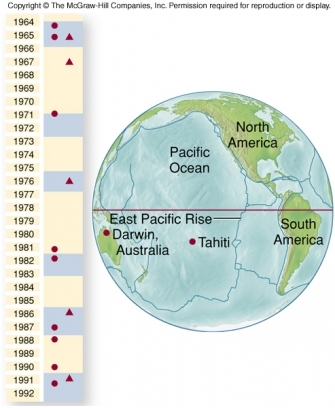 Scientists have come up with several explanations for how seismic activity may trigger El Niño events. These hypotheses are based on the relationship between air temperature and pressure. In general, warm air has less pressure than cold air, so hypotheses seek to explain how seismic activity along the East Pacific Rise could affect air temperature.

There are several other articles that discuss the relationship between La Niña/El Niño cycles and seismic activity, such as this article published by RSTA entitled Statistical analysis of the El Niño–Southern Oscillation and sea-floor seismicity in the eastern tropical Pacific.

There also appears to be a relationship between El Niño cycles and volcanic activity, as published in Nature.

Not the answer you're looking for? Browse other questions tagged geology weather seismology precipitation enso or ask your own question.

8
Does the climate have any effect on plate tectonics?
19
Can large (and wet) storms really trigger large magnitude Earthquakes?

20
What would a replacement for SEGY look like?
8
How does El Niño affect thunderstorm/tornado/CAPE activity in the central United States?
15
What is the predictability of El Niño/La Niña?
13
Is there a correlation between hot springs and earthquakes?
4
Can El Niño/La Niña occur again after normal state?
3
Can El Niño and La Niña occur at the same time?
2
How many extreme shifts in climate has Earth gone through in its existence?
8
Seeming correlation between time of day and earthquakes