Why do high tides vary month to month?

I've noticed that some ‘highest‘ high tides in one month are bigger than the highest high-tide of previous months. Why is this so?

The dynamics of the tides are quite complex. The main idea is that gravity from the Moon and the Sun affect water (and everything else) on Earth. The issue is that there are several motions that alter the distance between the 3 systems and those motions cause interactions between the different frequencies involved. The Equilibrium Theory of Tides separates the different effects into a set of constituents by conducting a harmonic analysis. The relevant periods are:

The explanation of each constituent can be rather complex (some examples in this other answer). The different amplitudes in a day and the spring-neap cycle are related to the combination of the main lunar and solar effects.

The differences in high/low tide from month to month are related to the next two main frequencies of oscillation. Mainly, the variations in Earth-Sun distance associated occurring in a period of tropical year. The lunar distance also contributes to these differences, but its cycle is much longer (~9 years). Also, the spring-neap cycle (with a frequency of half a lunar month ~13.5 days) will occur at different times of the month and can lead to differences in tidal amplitude if you compare the tides measured the same day of consecutive months. 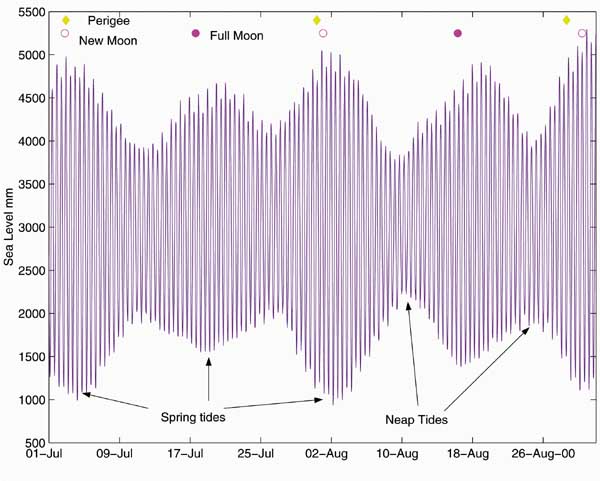 Arkaia's answer gives good information on the primary cause, which is the multitude of different astronomical changes that operate on various different timescales.

However, there's an additional consideration, which is "storm surge" or, more colloquially, "what the weather is doing".

Differences in atmospheric pressure between different areas can lead to water flowing to those areas with low pressure, and this can make a significant difference (metres) to sea level. The same is true of heavy winds and wave action. Usually this is considered in terms of flooding, and it isn't a tidal process - but it does still affect the elevation of any given high tide.

Storm surge is often discussed with respect to hurricanes, but the more modest pressure differences elsewhere can still have considerable effects.

Not the answer you're looking for? Browse other questions tagged oceanography sea-level tides or ask your own question.

14
Why is there a daily inequality for low tides?
2
Modelling sea levels with gravitational parameters
9
The motion of tides
4
Relationship between tides and earthquakes
4
How often do king tides (perigean spring tides) occur?
8
How come the tide is low when the moon is high in the sky
4
High tides at Venice
10
Why high tides occur simultaneously on opposite sides of the Earth?
6
Do flights affect tides?
3
“Major Lunar Standstill” causing high tides?