Is it less windy in a valley than on a hill?

Assume we have a mountain landscape without trees.

Would it be less windy in a valley than on a hill, or would the wind just be the same?

Or in other words, which of the two images below describe the wind more accurately: 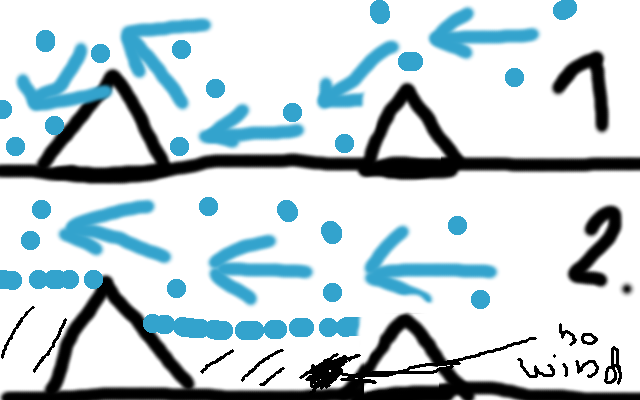 Scenario #1 is relatively, somewhat, kinda, but-not-really accurate for summer, scenario #2 more so for winter. If you live in or near mountains, you are familiar with cold evening winds that come ripping through canyons and valleys to settle in basins. In mountainous vineyards of Europe, vine layout is routinely adjusted to dissipate these winds. Even if there is NO (weather-induced) wind, thermal gradients can create winds of their own.

It will vary, but in general it will be windier on a mountain than in a valley.

An explanation: What slows down wind? Friction. In the valley, there is more friction than on the mountain.

Note that the fastest wind gust in the US was recorded on Mount Washington with a 200 knot gust. On Mount Washington, buildings have to be chained down to the ground, to prvent destruction.

Now there are scenarios that the valley is windier than the mountain. Examples include downslope windstorms, and valley breezes. However, if you were to look at climatology, friction would likely play the largest factor.

The best answer is likely both:

A big key is that in general winds are typically stronger aloft. This is because friction dissipates wind at the surface. And winds, particularly in the mid-latitudes, are reasonably strong aloft in most places. It does vary some from place to place and from time to time, but this is the general trend.

Given that, a central contribution is mixing. During the day, the ground often begins to warm, and pockets of air start to rise and mix up the atmosphere. This causes the winds to increase at near-ground level because it mixes those higher winds down.

But at night, as the atmosphere cools, the lowest levels start to cool first, and so the ground layer "decouples" from the rest of the atmosphere, such that it stops mixing with the air aloft. Winds typically drop off.

This is important in how the atmosphere can cool quickly under clear conditions (where the warmth radiates away quickly, and the unmixed layer deepens)... and in why tornadoes are much more unlikely at night.

Since we're drawing, I attempted to sketch an idea of how vertical winds change as the day goes on, and then progresses on into the night:

Notice how the ground winds are usually highest in the afternoon and evening, as mixing averages out with the winds higher up, before reducing as the night goes on.

So when talking about regions near mountains... during the day, there is a lot more motion in general. And thus stronger winds mix down into the valley. Plus, often as that stronger wind flows up the mountainside, they'll cool too much, and sink back into the valley. So winds from above affect the valley, and winds from the sides likely affect it more as well. At many times there may not be as much of the up and down as you've drawn... but other than that, it looks more like your top figure because of the mixing.

Whereas at night, wind near the surface start to calm. In valleys, the additional blocking of winds often cause it to calm even more quickly, as there quickly isn't even horizontal mixing to keep things active. That's why at night even small valleys can often get quite a bit colder than surrounding areas on nights where there's little synoptic wind [wind due to larger storm systems]. But even on most slightly windy evenings, it's likely that the winds in valleys are calmer than on the mountains (which tend to be much higher than other places on Earth), and also probably calmer than similar areas in the Plains.

Not the answer you're looking for? Browse other questions tagged wind planetary-boundary-layer or ask your own question.

21
Significant difference between averaged wind speeds and averaged wind power density, for wind generation modelling?
3
The effect of buildings on frost
0
Other than the South Pole where is the windless place on Earth?
5
How to make, read, and calibrate a ping-pong ball anemometer?
0
Does being in the air provide any protection from an asteroid?
9
Why do rivers sometimes travel down the opposite side of the mountains from where the rain happens?