Plumes in both systems experience decreasing pressure and decreasing temperature as they rise. Why do the phase changes go in opposite directions, i.e. why do rising mantle minerals melt while rising atmospheric waters condense?

There is no comparing the chemical composition of "atmosphere" with that of mantle rocks and the consequences of rising in each have almost nothing to do with one another. The cooling of rising atmosphere is a fairly simple thermodynamic process requiring neither molecular change of ingredients, chemical release of water, nor thermally impervious boundaries.

By contrast, rising mantle materials will undergo different melting processes depending on their water content and chemistry. In the simplest case, like a mid-ocean hot-spot, unpolluted by melt fluxes like water and carbonates, rising mantle rock undergoes "decompression melting" in which 2 things happen:

1) The pressure needed to keep rising mantle material solid is released and the material becomes liquid (like that crudely drawn by Michael, above). Remember, given enough pressure, you can heat up ANYTHING and keep it solid...even hydrogen, like that believed to exist in the earth's core.

2) Constituent minerals undergo phase (mineralogical) changes on their way up to the base of the upper crust. Remember that mantle materials come to the earth's surface as basalts which are mineralogically different from the olivene-rich peridotites of the mantle. Despite being chemically similar, deep mantle rocks contain minerals that are crystallographically denser than those found basalts. As they are brought up, these minerals undergo a phase change that alters their crystalline structure; they become different minerals, lighter and more buoyant, further reducing the density of the rising melt.

So, there it is (in a nutshell): reducing pressure on hot solid material allows it to become liquid and also invokes phase changes in minerals that make the overall material less dense.

When humid air rises, it reaches higher altitudes where it meets colder air. Because air is a fluid, it readily mixes with the colder air around it, lowering the vapour pressure of H2O and condensing as liquid or solid (i.e. water or ice, respectively). This is very similar to heat transfer by advection and convection. (also note comment by casey below)

The mantle, on the other hand, is a solid. Mixing of the hot plume with the colder surroundings is extremely slow and happens only by conduction. Rocks are terrible conductors of heat, so they only cool down adiabatically, which is not much at all. If we look at my badly drawn phase diagram: 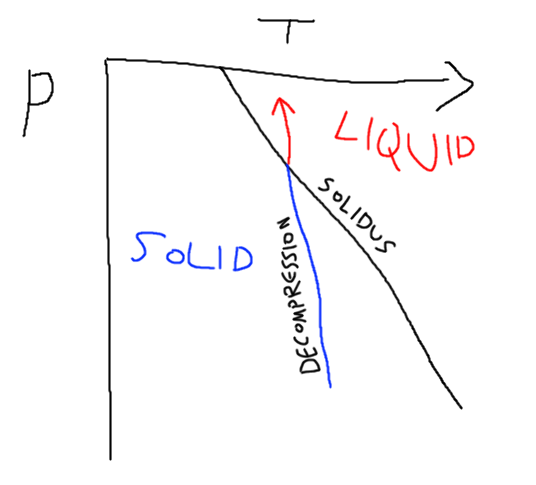 You can see that a rising rock (the red and blue lines) does not cool rapidly enough to miss the solidus (the curve denoting the P-T conditions where rock melts). Therefore, it melts.

I would also like to add that most rocks in mantle plumes don't actually melt, or they do so to a limited degree. Mantle plumes cause widespread melting because they rise and pool below other rocks that are less refractory (easier to melt). This can be because of their composition which is less mafic, or because they have fluxes such as water in them. The heating of these crustal rocks by the mantle plume is what usually causes widespread melting.

33
Why do felsic materials have lower melting points than mafic?
21
Why are minerals found in "large" quantities and not scattered throughout the earth as individual atoms?
24
Why is the temperature *still* rising?
6
Why is ground water rising on these forest rings?
6
Why are most minerals so rare?
4
Why doesn't subducted earth crust melt?
5
Why did the carboniferous period have so much atmospheric oxygen?
6
Why doesn't the Earth's outer core dissolve into the mantle?
4
Why is the concentration of highly siderophile elements so uniform in the mantle?
6
If people aim to reach the mantle, why don't they just use volcano craters?