What is the reason for differences between these GHCNM and ERSST data?

What is the difference between the two data sources used? Where does it come from, and what is the accuracy?

What is the reason the first map has data the second one doesn't? The most reasonable conclusion is that it comes from the ERSST data that's not in the second map, but it would be nice to know why there is a difference.

A question was posted on the Skeptics site regarding the claims made in the linked blog post. However, the existing answer currently does not provide much detail and comments were posted suggesting that this site may be able to provide more information about the NOAA data and the science behind it.

The maps shown below are from here.

Actually, except for the deplorable comments (your "here" was a self-titled deplorable blog site), the maps are from NOAA itself. The maps without deplorable annotations:

What is the difference between the two data sources used?

The most obvious difference is that as the name implies, the ERSST includes data from over the oceans. These data are gathered by buoys, ships, and satellites. A not so obvious difference is that NOAA's merged land–ocean surface temperature analysis incorporates GHCN-M land-based stations that are not used in the GHCN-M land-only map. The locations and ages of the 7280 Global Historical Climatology Network (GHCN) stations are depicted below. Note that the vast majority of the stations in Africa are less than twenty years old. 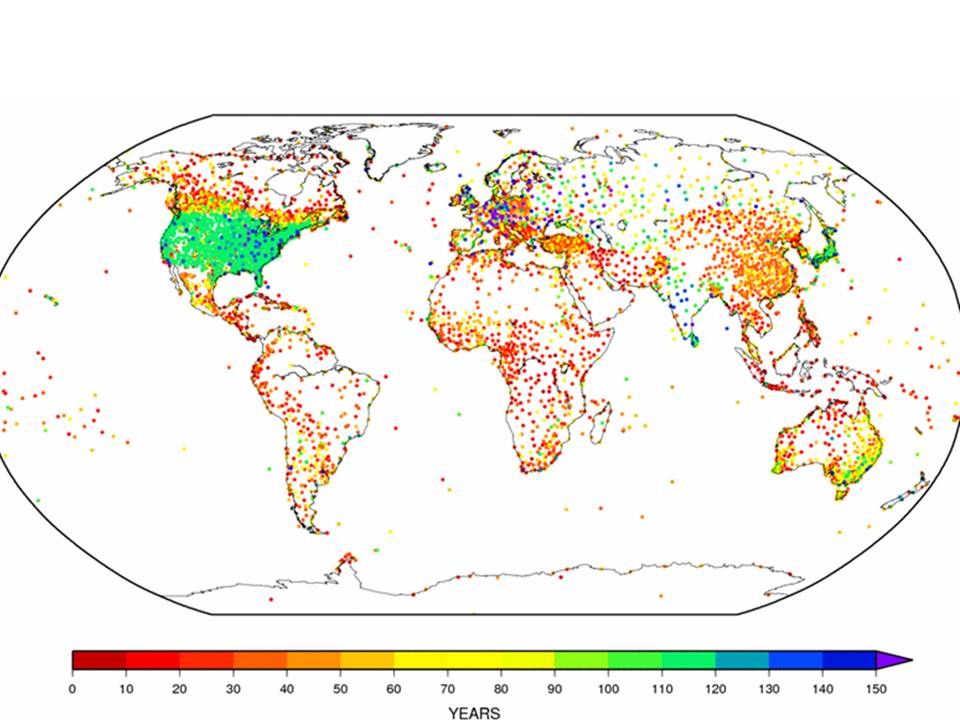 The land-only analysis uses GHCN-M stations only. It does not use satellite data. Because of this it excludes stations that don't have a solid history of measurements from 1981. This would include the GHCN-M station at the Kigali International Airport in Rwanda, whose data coverage over the last 40+ years is only 48%. The GHCN-M-based land-only map only uses about 2600 of the 7280 GHCN-M stations.

The NOAA Merged Land Ocean Global Surface Temperature Analysis uses satellite data as a sanity check. This enables it to use most of the ~4700 GHCN-M stations excluded from the land-only map.

Not the answer you're looking for? Browse other questions tagged temperature or ask your own question.