What would happen if magma flows into a very large oil deposit?

If there were an earthquake that somehow cause a crack in the earth and allowed a significant amount of magma to flow into a very large oil deposit. With that high amount of explosive energy that would be produced, could it cause an earthquake or even a volcano? Does this usually happen?

If there were an earthquake that somehow cause a crack in the earth and allowed a significant amount of magma to flow into a very large oil deposit.

My understanding from this is that you are making two assumptions, which are not necessarily true:

That said, what will happen if it does actually happen?

With that high amount of explosive energy that would be produced, could it cause an earthquake or even a volcano?

Not really. Injecting magma into oil may cause some of it to boil or evaporate, causing expansion and possibly fracturing. But the magma is already fracturing the rock anyway. The oil itself is not going to burn or explode, because this requires oxygen that is not readily available underground. The oil can reduce the iron in the magma, thus being oxidised to CO2 (and forming metallic iron). This is probably not going to make much of a difference if the oil was decomposed to methane, which is another gas. This might ignite if carried to the surface with the magma, but I doubt that it's going to do anything more spectacular the magma itself will.

Does this usually happen?

An oil deposit is gravel and rock mixed with oil, capped by rock - like this: 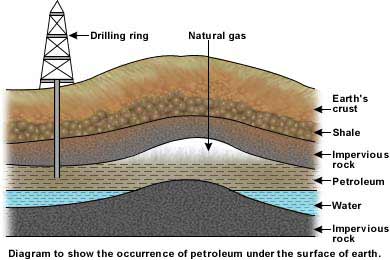 My guess is that if somehow, likely from below or sideways, magma would intrude into this deposit, oil (and posibly water) would evaporate. The pressure rises, slowing the magma intrusion. If enough magma and enough heat is provided, the vapor pressure of the oil may be enough to crack the rock layer at places, oil would escape and condense in the shale layer.

My gut feeling is that we are talking about processes that take years to decades to play out.

Not the answer you're looking for? Browse other questions tagged volcanology earthquakes petroleum gas or ask your own question.

11
What happens to the higher frequency content of the tremors associated with a volcanic eruption?
12
Why are titanium oxides lumped in with magnetite for the purposes of analyzing water bubble nucleation?
9
How does the composition of volcanic rock change as it makes its ascent towards the surface?
16
Potential explanations of Red Sea crossing
16
Can impact events cause widespread volcanic activity on the other side of the planet?
2
If lava flows back into the ground, would it be called magma?
2
Is an Earthquake Large Enough to Cripple the Entire West Coast of North America Possible?
13
If the Bennu asteroid were to hit within a 500 mile radius of Yellowstone National Park, will it trigger a super volcano at Yellowstone?