How can I find weather data for greenland sea during the 4 seasons?

In the Greenland Sea or in Denmark's strait, near greenland's cost, 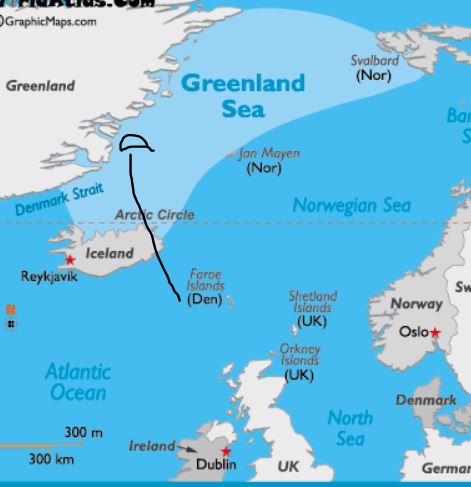 how can I find weather information for this place? Specifically, with respect to months (i.e, dec-feb, march-may, june-august, oct - nov). When it is warmest, coldest, etc.

An interactive website called earth has detailed weather data for the entire globe. Using this is similar to using Google Earth. You can adjust it for almost any weather data you need by clicking the "earth" icon and adjusting the date under each section. You can see the numerical data for a specific area by clicking the area on the globe with your mouse.

You can try the CFSR, a model reanalysis of climate, from 1979 to 2010, or you could use model data, such as the GFS for more recent data inquiries.

The data is in a very raw format (called grib/grib2), that I'd do some research on before you use this data.

http://www.dmi.dk/groenland/arkiver/vejrarkiv/ this is the info you are looking for i think it is in danish.

The WorldClimate website appears to offer some climate details from a variety of data sources in a rather digestible format. It gives details on the sources for each bit of information, which you may well want to dig into deeper to verify the data is reasonably reliable/representative.

To find locations, it seems the best options may be to search the data manually over your region of interest. Start from an address like http://www.worldclimate.com/cgi-bin/grid.pl?gr=N65W037, then use the directional controls on the page (or change the URL manually) until you hit other sites.

Or, alternatively, you search for known site names (unfortunately not just country names :-/) on the WorldClimate main page to see if you get hits. This list of current reporting station details at UCAR should give some useful possibilities.

Doing that, and trying to estimate from your map, it appears Angmagssalik (location) and Danemarkshavn (location) may be your best bets for the info you wish for.

You can download the data from the CRU-NCEP database https://crudata.uea.ac.uk/cru/data/hrg/ CRU stand for Climate Research Unit and it has the most accurate historical data available to the public. They are reanalyzed data from meteorological stations and ships. The highest resolution available is 0.5 latitude * 0.5 longitude degree grid. And for temporal resolution they have 6-hourly and daily. The data is in NetCDF format which is a format most map processing data use. If you don't know how to handle ncdf you could use Google Earth as well https://crudata.uea.ac.uk/cru/data/hrg/cru_ts_3.23/ge/ .

To know more how the data is derived you can read this paper. Hope it helps. http://onlinelibrary.wiley.com/doi/10.1002/joc.3711/abstract

There is a buoy station Station TFBLK - 10.0 nm WNW on Blakknes, Iceland but it seems to me it only logs data related to waves.

Tha U.S. National Data Buoy Center web site has a "radial search" tool where you put as input the lat/lon of your point of interest and a distance and it gives you a list of observations (I think made by ships). For example this is the search centered at the TFBLK buoy with a query radius of 450km.

The Environmental Working Group (EWG) was established in June 1995 under the framework of the U.S.-Russian Joint Commission on Economic and Technological Cooperation. In January 1996, the EWG Arctic Climatology Group took on the task of compiling digital data on arctic regions to expand scientific understanding of the Arctic. This work resulted in a set of three atlases on CD-ROM for arctic oceanography, sea ice, and meteorology. The Arctic Meteorology and Climate Atlas was developed by specialists from the Arctic and Antarctic Research Institute (AARI), St. Petersburg, Russia, the University of Washington, Seattle, and the National Snow and Ice Data Center, University of Colorado, Boulder. The Atlas contains three main sections: a history section, a 'Primer,' and a data section. The history section and Primer provide background and introductory information for newcomers to arctic meteorology, while the data section contains gridded fields of meteorological parameters, and newly released meteorological station data from Russian and other sources. In addition, the Atlas includes several English translations of Russian technical documents, and a glossary of meteorological terms in English and Russian. Users can download the CD-ROM from the NSIDC FTP site. NSIDC also distributes the EWG Joint .S.-Russian Atlas of the Arctic Ocean (Winter and Summer periods), and the EWG Joint U.S.-Russian Arctic Sea Ice Atlas.

Also, the data from drifting buoys:

you can see some data here: