How can we calculate the total water mass that falls during a flood?

I would like to know how to calculate how much water fell on California during, for instance, the mid-February 2017 flood. I know how to look up the total rainfall at a specific weather station. And, given a meteorological model output, I could calculate the total water precipitated over some area. However, I don't know of any standard method (using observations) to calculate total cumulative water fallen over some area. I've seen multi-station precipitation indexes like the one shown below. But, I don't know how to use that to calculate total water that has fallen to the ground.

Based on observations, how can we calculate the total cumulative water volume (or mass) that has fallen on a large area during a storm? And, using that method, can we calculate how much water fell on California during the 2017 February flooding events? The only thing I can think of is to use the rainfall measurements at every station, interpolate across the area of interest, and then integrate. Though, that seems like quite an intensive GIS project. Is there a better,standardized way to make the calculation? 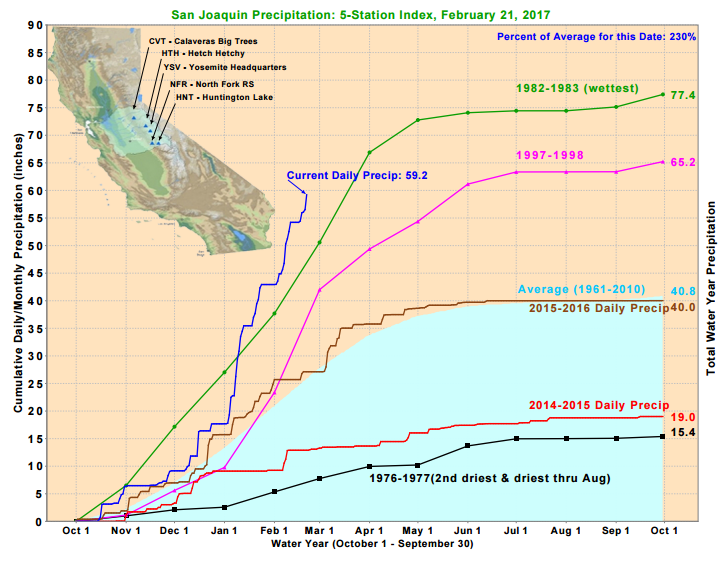 meteorology rainfall
Share
Improve this question
edited May 22 '18 at 5:57

You could use gridded model forecasts or reanalysis data to calculate the total water that precipitated.

Mathematically, the quantity you desire can be expressend by $$Q=\int_{t_0}^{t_1}\Big[\iint\limits_A R(x,y,t)dxdy\Big]dt=\iint\limits_A P(x,y)dxdy$$ where $R$ is your precipitation rate, $P$ is your accumulated precipitation, and $Q$ is your desired quantity.

One possible way of computing that quantity (In a crude Riemannian method):

Visible and infrared space-borne sensors can provide precipitation information inferred from cloud-top radiation, and microwave sensors provide direct precipitation measurement based on radiative signatures of precipitating particles. This type of information is not available through ground-based measuring systems.

NASA's Integrated Multi-satellitE Retrievals for GPM (IMERG) were used to estimate the total amount of rain that fell over the western United States from January 17-24, 2017. Rainfall totals of over 9 inches (228.6 mm) were shown in some areas. IMERG rainfall totals have been adjusted to reflect observed values in other similar extreme rainfall events.

You'll need to dig through the site to find the correct dataset and format, but it's likely in there.

We'll need to wait for the end of the month before the February numbers are posted, though. As for daily-tracked precipitation data, you can see that here:

I don't have the answer for you, but I can point you to the tools that can be used to get such an answer. The Advanced Hydrologic Prediction Service compiles rainfall grids using radar, surface observations, and a variety of other sources. Options offered include daily, month-to-date, and archived data.

You can probably quite reasonably put the Shapefile download option into a GIS application, such as Grass GIS or ArcGIS, then limit it to the state (or area of interest) and compute an average or total.

Alternative, you can download it as NetCDF, which I know you'd be able to open in GrADS/OpenGrADS, mask it to a certain area using some sort of shape file or geometry, and then run an areal average on it.

I really do wish more straightforward, user-adaptable data were easily available (and no guarantee it's not, I just don't know a source). But at least this will give you the tools to figure out.

And while you're focused on rainfall, perhaps read up on central California's Great Flood of 1852!

One other way to get an estimate of the total volume of water would be to use stream flow values combined with reservoir level changes, and attempt to estimate what percentage of rainfall escapes the reservoir system. But at that point you're getting a very rough estimate, because the monitoring system doesn't measure every small stream emptying into the sea... and a significant (and varying) percentage of the water infiltrates the soil or evaporates. Those complications could be incorporated into the calculation, but in the end, that seems a complicated way to solve a problem we already have more complete information on.

You asked for how much water that is. Well, we can just as easily get a fair estimate from the map: 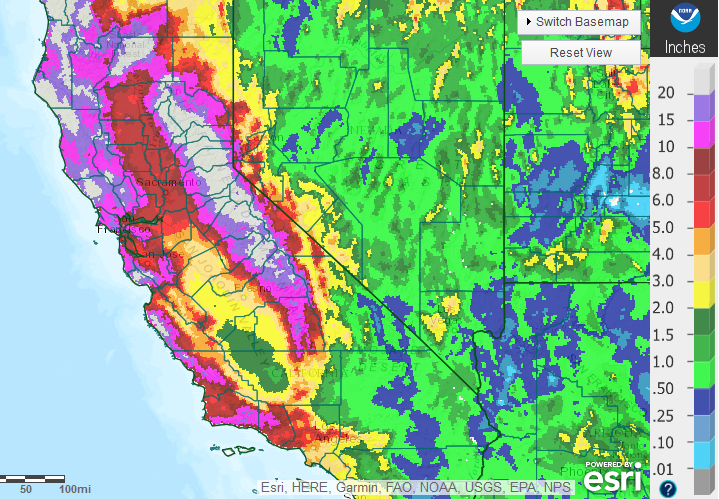 (month to date as of February 22nd)

Which begs the point... we don't often think in terms of trillions of gallons. Trillions of gallons seems a ton, but even just a meager 0.35" over the state would equate to a trillion gallons. Perhaps normalizing it to the area... such that it'd be $ \pu{140000 gal/mi^2}$... is a little better. But still, a typical person would struggle to recognize whether any given value in this form would result in a flood or a droughts.

That's why we often just work in terms of percentiles, or graphs, or return periods, or just give the average in terms of inches itself. It may not click great with everyone, but for many, such units are just a little more interpretable.

On a related note, there is another method, still being refined, that uses geodesy, the science of precisely measuring the shape of the earth and its gravity field.

Researchers have dotted California, and much of the seismically active United States, with GPS stations that can provide precise measurements of their distance from each other and their altitude, information which is useful for gauging movement along faultlines. But researchers noticed during the past decade and a half that stations in drought-ridden areas had increased in altitude -- as the mass of water in the ground was decreasing, the land surface itself was rising up.

Abstract for Ongoing drought-induced uplift in the western United States:

The western United States has been experiencing severe drought since 2013. The solid earth response to the accompanying loss of surface and near-surface water mass should be a broad region of uplift. We use seasonally-adjusted time series from continuously operating GPS stations to measure this uplift, which we invert to estimate mass loss. The median uplift is 4 mm, with values up to 15 mm in California’s mountains. The associated pattern of mass loss, which ranges up to 50 cm of water equivalent, is consistent with observed decreases in precipitation and streamflow. We estimate the total deficit to be about 240 Gt, equivalent to a 10 cm layer of water over the entire region, or the annual mass loss from the Greenland Ice Sheet.

I was at a seminar last month where one of the researchers talked about using the same methodology to measure the mass increase from the ongoing storms in California, but I think it's too soon for any published research.

Not the answer you're looking for? Browse other questions tagged meteorology rainfall or ask your own question.

22
Is there an upper bound to the amount of rain that can fall in an hour?
3
How to calculate water vapor flux divergence from temperature, relative humidity, u wind and v wind?
9
Any historical examples of destructive climate warming?
3
How can I find weather data for greenland sea during the 4 seasons?
5
Can I use radar data to estimate snowfall, or is there a better way?
6
How much rain falls on the Earth each year?
8
How do I find the horizontal pressure level that divides the atmosphere into 2 layers of equal mass?
3
Data of terrestrial evapotranspiration over large areas?