What fraction of Earth's crustal material survives the supercontinent cycle?

I know that things are not as simple, but for the sake of argument I'll assume a supercontinent cycle of $\sim$400 Myr periodicity is active on Earth.

If that is the case, then my naive understanding was that roughly all of Earth's crust is reformed on this timescale, and information about the past is forgotten due to melting in the subducted zones.

However I stumbled upon a research article that cites "Most exposed continental crust that can be dated back to the Archaean eon (4 billion to 2.5 billion years ago) comprises of..." as summary of another article.

There is two parts to this answer, first continental crust tends to persist and oceanic tends to be recycled. This is largely due to density, continental crust is less dense and tends to "float" compared to the mantle and is very difficult to push back into the mantle for remelting. Only a tiny fraction of continental crust ever gets subducted mostly as sediment on oceanic crust, so basically by piggybacking on subducting oceanic crust. This is why continent to continent convergent boundaries form mountains with no subduction, they can only push down by pushing even more material up, in effect packing together like wads of compressing clay.

Second continental crust is reworked by other processes, erosion, faulting, rifting, mountain building, metamorphic processes, etc. These are regional effects and thus more random, so how much they alter can vary quite a bit from continent to continent. Exposed un-reworked continental crust is rare but this is due to the accumulation of events reworking smaller regions and the tendency of sediment covering it up. There is much more unexposed old continental crust buried under the sediment, often referred to as the shield portion of the craton, Shield is the portion of the continental crust that is not sediment and is not tectonically active (even some shield is partially metaphorically altered, but this is where you find unaltered material) There is quite of bit of ancient shield (brown in this picture) although it still makes up a small percentage of the overall continental crust. Even then only a fraction of it has survived all the continental cycles and is completely unaltered since the first continents formed.

This image illustrates how much of the oldest continental crust is still around(purple). 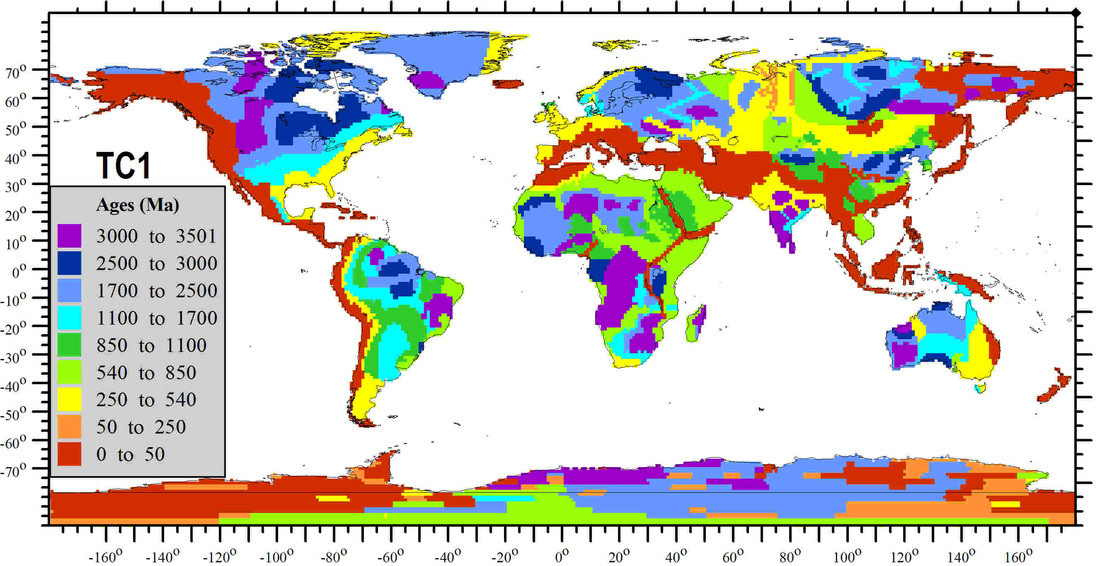 Basically oceanic crust is guaranteed to be reworked eventually, check the age of oceanic crust, while continental crust has a more random factor involved meaning some in the more stable regions of some continents has not been reworked. That is why they are only small scattered areas.

The fraction that has survived this "supercontinent cycle" is very small and can be found in only a handful of places where it outcrops....generally as part of interior cratons in Canada, Greenland, etc. However, even within these Archaen shield rocks, the volume of "original crust" is itself very small, hard to find, and subject to controversy with respect to chemistry.

Original crustal material that dates back to a pre-tectonic (Hadean) regime would have to have been formed from cooling of molten material and would itself contain a very specific chemical signature that is itself, theorized but not known with certainty.

Given how small that volume is, and how difficult it is to access many of these rocks, it's unlikely that anyone will pony up the money for a deep seismological survey of their extent at depth, so, a solid number for volume will not be forthcoming soon.

18
Historically, how has the fraction of Earth covered by water changed?
14
What are the causes of the supercontinent cycle?
22
What was the first rock in the rock cycle?
13
How is abundance of elements in the Earth's crust estimated?
6
What was the likely composition of Earth's early crust (how did crustal composition evolve)?
1
What is the earth's core temperature?
3
Need help understanding what an "isostatic model minimizing crustal deviatoric stress" means
6
Why doesn't the Earth's outer core dissolve into the mantle?
2
Which ocean is going to be swallowed by the Supercontinent Cycle, Atlantic or Pacific?