Is the Earth heated up by the tides?

Reading about moons of other planets they often get heated up by the tides so for example Io and Europe of Jupiter get friction by which eruptions and liquid water can arise. But is there also an effect on Earth due to the tides of the moon and sun? If so how many degrees is the Earth heated up? 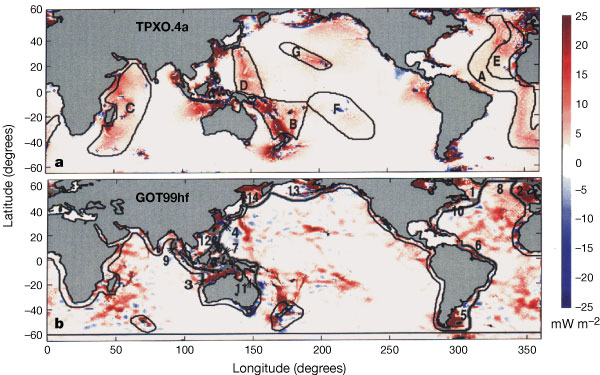 Egbert & Ray (2000) showed that a fraction of the dissipation (1 TW) takes place in the deep ocean in areas of, generally near areas of rough topography. Maintaining ocean stratification and the large scale thermohaline circulation (the commonly known "Conveyor Belt") requires around 2 TW to provide enough mixing (Munk & Wunsch, 1998). Therefore, the tides provide about half of that energy with the other half coming from wind forcing. 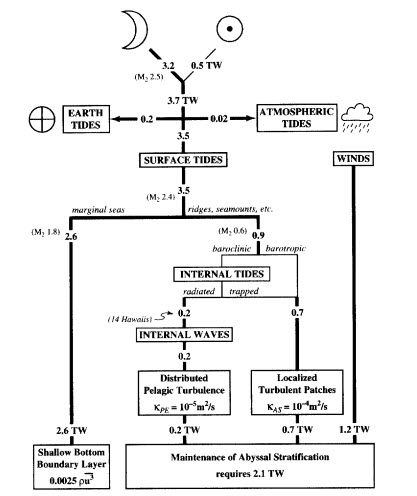 The repercussion of this fact are given by Wunsch (2000):

...it was only recently recognized that the need for an energy source to sustain the vertical mixing (lifting dense water through lighter) has important consequences. The difficulties of driving fluid motions by surface heating and evaporation mean that a mechanical source of energy must control not only the directly wind-driven flows, but also the deep-water components of the meridional overturning circulation.

... changes in tidal distributions and the consequent mixing would need to be understood over geological time. During the Last Glacial Maximum, the sea level was about 130 metres lower than today. This configuration removed much of the present regions of shallow-water energy dissipation and changed the deep-ocean tides, presumably affecting oceanic heat transport. Over longer periods in the past, the entire continental configuration was different, with radically different tidal distributions and mixing. It appears that the tides are, surprisingly, an intricate part of the story of climate change, as is the history of the lunar orbit.

According to this article, the energy lost by Earth in tidal acceleration is about 3.321 TW, most of it (95%) is converted to heat by frictional losses in the oceans and their interaction with the solid Earth, and the rest (0.121 TW) is transferred to the Moon.

1
What has been the influence of the moon on Earth's temperature?

3
How much do tides affect earth's rotational velocity?
9
The motion of tides
9
How was Venice flooded?
14
Would oceans regenerate if removed?
10
Why high tides occur simultaneously on opposite sides of the Earth?
6
Do flights affect tides?
6
Calculating Love numbers (tidal deformation) for non-homogeneous planets
4
Why do ocean tides have negative and positive terms in their effects on Stoke's coefficients for calculating geopotential?
2
How large were Mars' ocean tides and to what extent could they keep the oceans mixing and tend to keep salinity uniform? Has this been modeled?