How does the Coriolis effect affect rivers and estuaries

I'm quite confused about this since it is said to influence major currents in the sea the winds to the formation of gyres in the ocean and as well as influencing the weather at times due to the planet's rotation and the direction of where the winds are going.

Are there any effects(positive/negative such as sudden algal blooms) generated by the Coriolis effect that can affect the rivers and the inhabitants near it?

The effects of Coriolis in rivers and estuaries are more subtle than in the open ocean. Coriolis tends to be a second or third order process in fast-moving and relatively small systems like rivers.

On the other hand, when the residual flow in an estuary is considered, then that process tends to be slow and persistent and the effects of Earth's rotation (Coriolis) can be more obvious. The residual flows tend to be much weaker than tidal flows in estuaries. Both seaward and landward residual flows are going to be slightly displaced to the right of the direction of flow (in the northern Hemisphere) resulting in asymmetric flows. The resulting exchange flow (in the northern Hemisphere), looking in up-estuary direction, is going to have denser seawater flowing into the estuary in the deeper right side of the estuary, while fresher (lighter) river water will tend to flow seaward near the surface along the left side of the estuary. 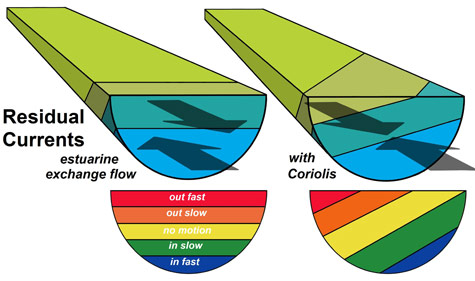 The asymmetric flow exchange will affect any particle in suspension (e.g., organisms, sediment). In general, estuarine circulation tends to create areas of high turbidity (estuarine turbidity maximum, ETM) in the vicinity of the tip of the salt wedge. Decomposition of organic material in the high turbidity zone of the ETM can cause oxygen depletion, especially in the lower part of the vertical where mixing with oxygen-rich surface water is inhibited by stratification. In a system where Coriolis is a relevant factor, the distribution of this anoxic conditions (the often called "dead zone") is going to be displaced and can be more extensive in the right side of the estuary.

A good summary of the effects of rotation (Coriolis) in estuaries can be found in Valle-Levinson (2011).

Not the answer you're looking for? Browse other questions tagged rivers ecology coriolis estuary or ask your own question.