What is the temperature of the flowing water in icy river?

Boundaries of the question:

Attempted research to find the answer :

I had in mind that the current allowed the water to stay liquid, but that might be wrong because there is no proof to it. However, this answer says:

Which seems to agree that current can lower the freezing point.

I found a great document about the temperature of the water within lake, but didn't find any reliable answer for rivers.

EDIT
I have come to believe that temperatures don't typically fall below 0 °C, based upon aggregating the following information...

Using this, we can probably conclude that water won't cool down enough during it's journey down the river. Thus, the water would need to be already colder at the start of the journey. We know that the start is a lake with calm water. So, it's unlikely to happen because the lake would freeze completely and stop flowing out into the river.

This is a complex question.

I will assume the following to be able to frame an answer properly:

This all means that the cold region's rivers are not thermally static through time. Even in the High Arctic, an icy river can be frozen along both its vertical and horizontal profile during a good part of the long winter, and thaw completely during the short summer. But other considerations exists.

Let's examine what can happen when the snow thaw is sometime in June. The discharge signature for a river in the High Arctic is nival, with a discharge peak occurring during early summer due to the massive input of snowmelt water, and additional weaker responses from the small rain amounts. This looks like this: 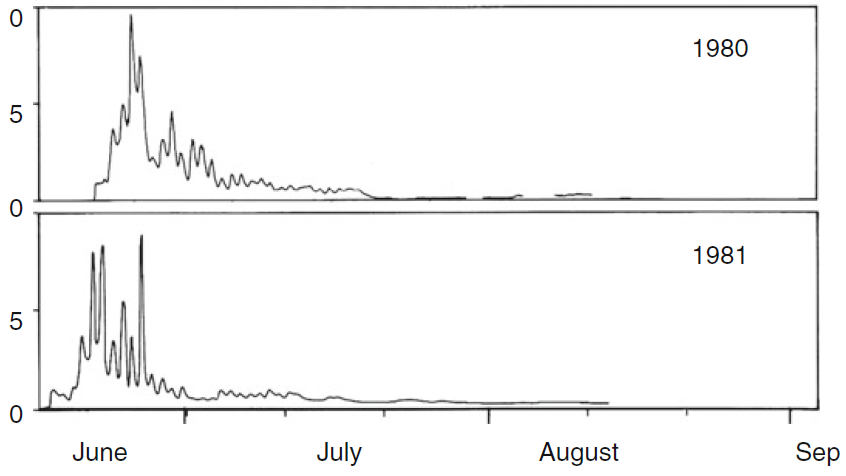 So what basically is happening here?

During the next several months, snow will accumulate in the landscape. In a landscape there are snow sources and snow sinks (Pomeroy et al. 1997); sources may be higher lands, outcrops, plateaus, or exposed areas, and sinks lower areas, such as depression or channels. Our typical nival river will be a sink in this context.

Because of this, it is not only patches of ice that will be found in the river channel, but tightly packed snow that builds up at the base when it is a thick layer (or is looser when the snowpack is thin). In any case snow will be most likely metamorphized in structure as a result of surface thaw and the water snowmelt infiltration -> snow percolation -> re-ice events during the winter.

What is happening in June, in more detail?
Let's analyse this further with a more detailed (though raw and unprocessed) graph from a small stream in a gully near Pond Inlet, with resolution available up to the nearest day:

Source: Stream temperature and water pressure in a stream located in a gully on Bylot Island, 85 km from Pond Inlet; raw, partial data from my PhD work. Temperature in blue, scale on the right, and pressure in black, scale on the left. Dates on the x-axis.

By looking at the pressure line (in black), it can be interpreted that there was no water until June 16th when the pressure increased drastically. Temperature (in blue) stayed at -2 °C until the 17th. Water was infiltrating into the snow at this time, contributing to the slowly rising pressure, but the water did not reach the sensor until the 17th when the temperature starts rising. During the 18th, temperature rises to -0.5 °C, then hovers in these negative temperature for almost 24 hours. This supercooled water temperature is due to a mix of factors, such as increased pressure from the water on snow, the release of latent heat due to the metamorphized snow thawing, and the near zero temperature of the water, in balance with the snow.

When a critical mass of water accumulates near the logger emplacement in the stream channel, the bulk of the snow melt and water then shifts to positive temperatures, still near zero, with diurnal/nocturnal shifts (blue line becoming wave-like).

Note: This small stream is minimally impacted by the geothermal flux (heat flowing up from the ground below).

Summary, in relation to the questions:

Not the answer you're looking for? Browse other questions tagged temperature water rivers or ask your own question.

31
Is it possible for rivers to freeze completely and stop flowing?

31
Is it possible for rivers to freeze completely and stop flowing?
49
Why is the pond in my backyard not frozen when it is -15 °C (5 °F) outside?
2
Do ice crystals form in running super-cold water?
7
How do rivers last so long in dry weather?
8
Why is my pond / lake melting when the temperature is still far below freezing?
9
Where did the daily temperature variation go?
2
Solutions to the global water shortages by damming the Baltic Ocean and the White Sea
1
Would the Climate change in Southern Africa by Filling Lake Makgadikgadi Evaporation Pans with water from the Zambezi and Chobe Rivers?