How will climate change affect the latitudinal distribution of precipitation over each latitudinal region?

In other words... How will it affect precipitation in the tropics? The mid-latitudes? And the polar latitudes?

I'm interested in both the mean and variance of the precipitation.

The continued trend of a warming climate that is expected due to increased GHGs will lead to a net increase in total moisture, since the atmosphere can hold more water vapor at higher temperatures. In general, the equatorial zones and poles will have a net increase in precipitation while lower mid-latitude zones will have reduced precip, with the rain belt moving poleward. Climate models generally show a pole-ward shift of extra-tropical precipitation because the increased heat energy allows convective systems in low latitudes to loft the convective air higher up, which in turn leads to greater horizontal transport (generally poleward) before air completely descends and contributes to the development of an associated storm system. You can also expect the poleward shift since cold temperatures accelerate the precipitation process, and since systems will have to travel a little further poleward to reach those cold temperatures.

A 2014 IPCC Technical Summary figure (below) shows change in precipitation forecasted ~65 yrs into the future. The image on the left represents a best-case scenario if we reduce carbon emissions while the right represents more of a business-as-usual scenario. 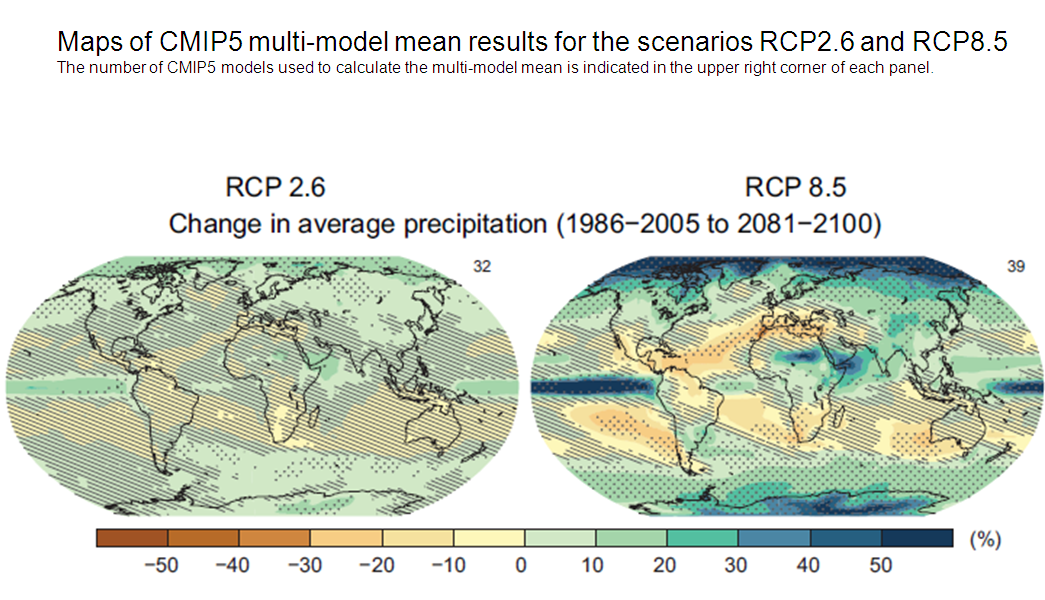 There doesn't seem to be a consensus model. All the 5 major models disagree on the specifics the last time I looked. Nobody has made more than general predictions as to the specifics.

There are general patterns based on the type of climate change and its primary driving cause.

-) Warming from non-water Greenhouse gasses: Effects strongest in the driest regions as greenhouses gasses like CO2 and CH4 provide greenhouse effect in place of water vapor. Polar latitudes most strongly affected as unlike deserts in lower latitudes, they usually have enough air circulation to bring in water, if the overall air temp rises high enough to transport the water. Decrease in temperature and humidity differentials between tropics and polar regions causes decrease in wind force and storm intensity. In most models, huge swaths of northern Alaska, Canada and Siberia will become wet and temperate. Something like the north Western coast of North America (Oregon to B.C.) Lots of soaking rain but few storms. I've seen it nicknamed the "Great Soggy" model.

-) Warming solar: Effects most significant first in the tropical regions because the regions more consistent solar exposure. Initially at least, higher temperature differentials and more violent storms but those will decrease as the poles warm but likely poles will still have a relative lack of greenhouse warming from water vapor so temperatures will never equalize to the degree in the Greenhouse gas driven warming. Still more rain overall that current period used as a baseline combined with more violent weather.

-) End of ice age: Likely, decrease in storm activity (the tropics don't cool at the same rate as the poles do during ice ages, so big storms) overall increase in perception. It is uncertain how ice ages affect non-water greenhouses gasses. On one hand, massive expanding biomass will suck huge amounts of CO2 out the atmosphere, on the other hand decaying biomass and possible exposure and subsequent biodegradation of ice interred biomass will cause net release of methane (CH4) whose greenhouse effect is 100 times that CO2. Depending on how that all balances out, the poles will get wetter or dryer.

-) Start of ice age: Overall decreased precipitation with overall decrease in air temp and humidity. Increase in temp differential between tropics and poles caused by increased albedo from spreading perma-snow and then ice sheets. As biomass dies from cold, there will be some increase in CO2 meth

-) Greenhouse gasses driven cooling: In principle, to rapid warming can cause ice melting from land masses in the arctic which can shutdown the oceanic conveyer which is the massive world circling ocean current that moves at least 50% of the heat around the earth. If the conveyer shuts down, the poles will get suddenly cooler and dryer and the tropics will likely not get hotter and wetter but will expand into a wider latitude north and south. Temperature differentials will increase while at the same time the distance will decrease. This will drive massive storms. However, likely to be short lived. Conveyer will reactivate in a decade or so at most.

Of all the forms of climate change, greenhouse driven warming is the best scenario as the effects will be the least intense and will likely last no more than a century. Increasing rain fall and expansion of the temperate band will bring many benefits to Alaska, Canada and Russia. Increase in rainfall offset by decrease in wind speeds and storm violence.

The start of the next Ice Age would be the worst case scenario. Droughts mixed with high winds and violent dry storms followed by longer and longer winters cumulating in permanent snow followed by kilometer thick glaciers that scrap everything down to the bedrock.

Not the answer you're looking for? Browse other questions tagged atmosphere precipitation climate-change global-warming or ask your own question.