Minimum temperature on 15km height on equator in JJA? 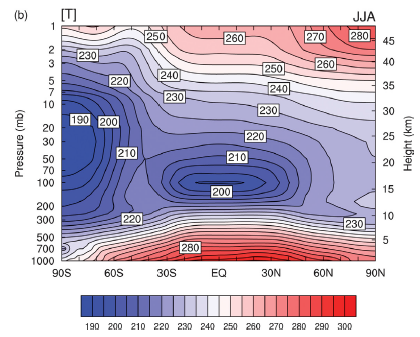 See this picture from the book Hartmann, Dennis L - Global Physical Climatology.
There is a minimum temperature point of 200K at 15km height above the equator, in June/July/August.

I don't know why this happens. Can anyone explain this?

The lapse rate in the upper troposphere is roughly the same as the dry adiabatic lapse rate, 9.8 °C/km. The 8 km difference between the tropopause height between equatorial and polar regions results in about 80 degrees more cooling in equatorial regions than polar ones.

9
How does the pole-to-equator temperature gradient scale with height contours?
86
Impossible or improbable? Hurricane crossing the equator
6
Is there a way to calculate the ground and 10m temperature from standard 2m temperature measurements?
1
Relationship between pressure, temperature and density in meterology
2
Atmospheric conditions needed that blocks all bright light during sunsets and allows you to stare directly at the sun
2
How to calculate maximum and minimum mean monthly temperatures?
4
How to get GHI data from MERRA-2?
1
What is the relationship between the derivatives of specific volume and potential temperature with height?