What are the formulae for calculating the thermal heating effect of back radiation in greenhouse gases?

The ability of greenhouse gases to trap heat and re-radiate some of it back to the original heat source looks like a useful thermal property which could possibly be incorporated in things like double glazing, wall insulation, etc. What are the formulae which will enable us to calculate this additional thermal effect on top of the normal conductive heat loss parameters, heat capacity, U values etc ? We would also like to find details of the original experiments which were used to confirm the accuracy of said formulae as all I can find with internet searches are the well know school type experiments with plastic bottles and heat lamps which demonstrate the principle but are not sufficiently quantitatively accurate. We asked a similar question in Physics Stack Exchange as we considered it a question relating to fundamental physical (thermal) properties of gases but it got little response.

As you have mentioned already, there are several physical phenomena which are responsible for heat and energy transfer. I'll just list them again for completeness, although you already addressed them in your question.

To get to your question: Radiation is the transport of energy by means of electromagnetic waves emitted from a body of a absoulte temperature uneqal zero Kelvin.

What does that mean? Radiation does not rely on contact or a transporting fluid as do conduction and convection. Instead it is equivalent to the fourth power of its absolute Temperature. This is what we know as "Black Body Radiation".

The equation for this is:

where σ is the Stefan-Boltzman Constant and T is the absolute Temperature in Kelvin. This law is obtained by integrating Planck's law over the solid angle and wavelength, in order to determinate the energy which is transmitted not only by one particular wavelength, but the whole spectrum and in all directions. Combined with Kirchhoffs Law, which says, that the absorbtivity of an object equals its emissivity, you can calculate the radiated Energy of any object or atmospheric layer. The emissivity (ε) of a body is a value between zero and one with one being the perfect black body. For most things you can find values in the web. It also explains why aluminum foil is such a good insulator.

To put all of this in an example: Everything around you radiates heat. Beginning with the most obvious, the sun. The sun's surface has an approximate temperature of 6000K. This means it emits radiation of the following spectrum: 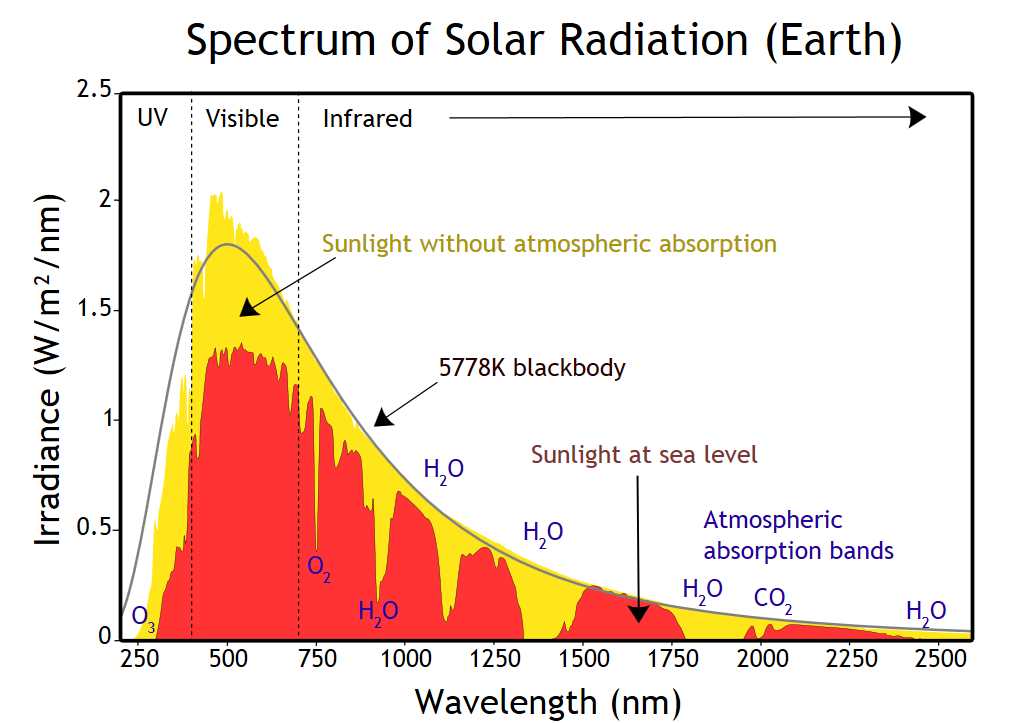 As you can see, the maximum of the energy of the sun is radiated in the part which we know as visible light. Also a big part of the radiated energy is absorbed in the atmosphere (the difference between yellow and red graphs). Responsible for these are particularly Ozone (O3), Water (H2O) and (CO2) which are also our most important greenhouse gases.

What happens, is that the radiated energy of a particular wavelength "hits" the molecules and excites them into a state of higher kinetic energy. The average random kinetic energy of a substance is what we know as the temperature of this substance. Hence, also the atmosphere acts like a black body and radiates energy back to space but also back to earth.

Unfortunately I can't really say much about the second part of your question. I don't know about the original experiments. But I suggest a read about Gustav Kirchhoff, who introduced the idea in 1860 which then has been proceeded by Josef Stefan in 1879 and Ludwig Boltzman (1884). Also Planck's works from 1900 could be helpful.

I hope I was able to point you in the right direction with your studies.

It is important to remember a number of things about the basic Stefan-Boltzmann equation. It is supposed to apply to a spherical black body at uniform temperature. This is a hypothetical thing ! It is spherical because if you have an irregular shaped object parts of it can radiate back onto itself. It is also supposed to be a body i.e. have a surface from which the radiation can be emitted (and also absorbed). This makes it trickier to use with something that is partially transparent to radiation i.e. some radiation can pass right through it (like gases). Of course we can adjust the basic S-B equation with an emissivity factor where a real world object is concerned. Finding an emissivity value for a gas is a bit tricky too. Especially when mixed with other gases. Even if pure, there can be a quite wide range of values, pure CO2 could be as low as 0.002 .

When you have done all that however you need to understand something basic. The S-B equation gives you a figure for the radiative flux. It is NOT a figure for heat transfer. To obtain a figure for the actual heat transfer you need the temperature of the cold object (double glazing gas filling or earth atmosphere) and the temperature of the hot object (interior room or earth surface). S-B will give you the radiative HEAT transfer from the hot source to the cold sink. There is no heat transfer the other way even though there is radiation transfer both ways. Consider it as a NET radiative flux transfer if you like. The radiative flux which flows from the cold object to the hot one changes the net outflow of actual heat from the hot object, i.e. its rate of cooling will be slowed. This is effectively the same type of thing as insulation in a conductive or convective sense. The more insulation there is the slower the rate of cooling of the hot object.

So for the Earth's atmosphere we can see that the so called "back radiation" (same as the measurable down welling long wave IR) are not transfering heat from anything but are in fact changing the net radiative flux at the earth's surface and thus slowing down it's rate of heat loss. The back radiation is not making the surface of the earth hotter per se but making it less cool when it loses heat. If you can get an equivalent effect to the atmospheric greenhouse gas effect by putting pure CO2 in a double glazing unit I wouldn't like to guess. I suspect the effect may be small but some lab experiments carefully designed to just measure radiation effects and eliminate conduction/convection would be a good idea. I am not aware of any past experiments having been done on this.

Not the answer you're looking for? Browse other questions tagged atmosphere climate-change climate-models or ask your own question.