Why would a Martian tsunami travel at only 200 km/hour, four times slower than on Earth?

The news article Impact crater linked to Martian tsunamis describes results of numerical calculations which address the possibility that a giant martian tsunami triggered by an impact has left recognizable features on the martian landscape. The research is published in the Journal of Geophysical Research - Planets, but as of this moment the DOI link there doesn't seem to work. However, it seems to be:

The identification of lobate debris deposits in Arabia Terra, along the proposed paleoshoreline of a former northern ocean, has renewed questions about the existence and stability of ocean-sized body of water in the early geologic history of Mars. The potential occurrence of impact-generated tsunamis in a northern ocean was investigated by comparing the geomorphologic characteristics of the Martian deposits with the predictions of well-validated terrestrial models (scaled to Mars) of tsunami wave height, propagation direction, runup elevation, and distance for three potential sea levels. Our modeling suggests several potential impact craters ~30–50 km in diameter as the source of the tsunami events. Within the complex topography of flat-floored valleys and plateaus along the dichotomy boundary, the interference of the multiple reflected and refracted waves that are observed in the simulation may explain the origin of the arcuate pattern that characterizes the thumbprint terrain.

I can not access the article yet, but the BBC interview with Costard leaves me puzzled about the speed of tsunamis:

Two successive waves were formed during the event, says François Costard. "It was a really large-scale, high speed tsunami. At the very beginning, a crater of 70km in diameter was created by the impact. This expelled a huge volume of water, with wave propagation at 60m/second," he explained. (emphasis added)

"The initial wave was about 300m in height. After just a few hours, that tsunami wave reached the palaeo-shoreline located at a few hundred km from the impact crater."

This gigantic wave washed over hills and plateaus and through valleys, leaving behind the lobate flow deposits.

"Finally... due to the Martian ocean filling in that crater, which produced a kind of rebound, there was a second wave propagation," Dr Costard added.

60m/s is 216 km/h, and this is consistent with a few hundred km in a few hours also mentioned.

Question: If I just google the speed of a Tsunami on Earth, I see 800 km/h. The surface gravity on Mars is about 3.71 m/s^2, or about a factor of 2.6 lower than that of Earth. Does this explain the factor of 4 slower speed of the Tsunami wave quantitatively?

below: "The thumbprint terrains probably formed when two sets of tsunami waves interacted." from here. 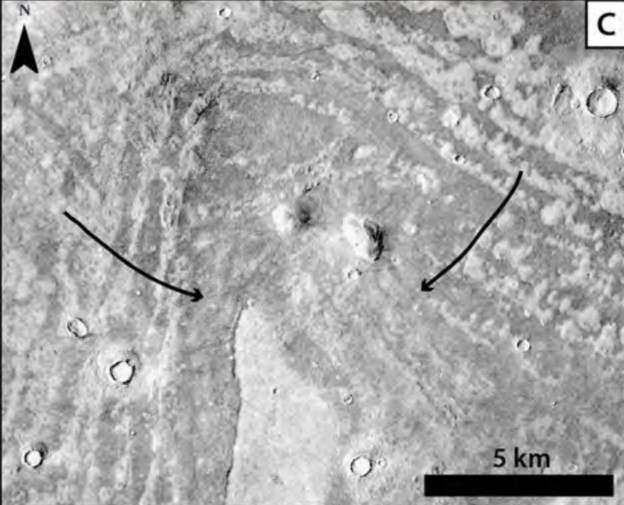 The linked paper does numerical modelling of a hypothetical tsunami and predicts speeds between 60 m/s (at its point of origin) and 30 m/s (nearer to shore). We can try a back-of-an-envelope approximation to see if we get close, and to understand why the speed would be so much lower than on Earth.

A tsunami behaves as a gravity wave with a very long wavelength. In shallow water (and pretty much anywhere in Earth's oceans counts as shallow water for such a long wave), the speed at which it moves is approximated by

where $V$ is the wave's speed, $D$ is the depth, and $g$ is the acceleration due to gravity.

Let's try this for Mars. As you've identified, the acceleration due to gravity on Mars is about 3.8 m/s2, and the linked paper gives assumed depths of the ocean on Mars as between 100 and 1200 m (forgive me if this is not quite right - I've only skimmed the paper, and these figures come from Table 1). Let's assume a 1000 m depth, since the highest speeds will be found in deep water:

which is close enough to their value for comfort. So a tsunami on the Mars described here would be much slower than on Earth due to the weaker force of gravity and the shallower depth of the ocean.

Not the answer you're looking for? Browse other questions tagged wave-modeling tsunami impacts or ask your own question.

12
Why does every tsunami travel differently?
18
Why do Tsunamis travel slower than sound?
15
At the ocean surface, why do large amplitude waves travel faster than small amplitude waves?
4
Climate consequences of very large asteroids striking the Deep Ocean