In general, does the presence of vegetation increase/decrease gross water loss (evapotranspiration) compared to barren land (evaporation only)?

I am doing some literature review on desertification. However, I could not find any information related to my question. Based on my knowledge, barren land faced greater heating and wind than vegetated area but the presence of vegetation can lead to a huge increase in evaporation surface area. They seem to me opposing factors. Based on my intuitive guess, I would say barren land would suffer bigger water loss but has there been any reliable research done on this? Is there a method to calculate and compare the gross water loss of the two scenarios? 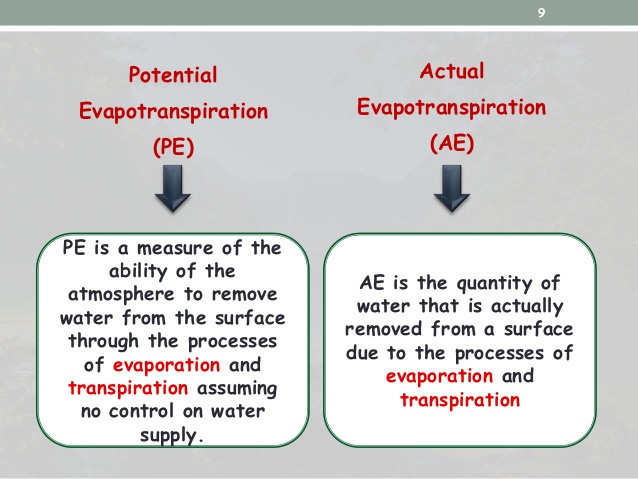 Source: presentation called Water resources and their management in Pakistan by Jannat Iftikhar

As you have already stated correctly: when vegetation is present, the surface (generally) holds more water, hence more water is lost to the atmosphere. While barren land experiences more heating and stronger winds, the barren land tends to hold less water to evaporate. Consequently, even though the conditions allow faster and more severe evapotranspiration, there is just no water to evapotranspirate.

The figure below shows an excellent example of this principle for two catchments in Saskatoon. Even though this figure isn't about an area facing desertification, it does exemplify the principle explained above.

To specify differences with respect to desertification, studies often compare catchments of similar size, meteorological conditions (radiation, precipitation, etc) but with different types of vegetation or different amounts/coverage of vegetation.

For catchments where we have a water surplus, we can check the discharge of that specific catchment and the average precipitation (which produces the discharge when multiplied by the area of the catchment). The difference between the two is the water lost to other processes of which evapotranspiration is the main one.

For the barren land situation, different methods are applied. One could try to calculate the energy balance of the surface based on measured or estimated meteorological and atmospheric parameters. Another option would be to place an evaporation pan, which is basically a flat surface with a layer of water. Subsequently, one can determine how much water is lost from it over a given period of time (taking into account the precipitation).

There are effects of vegetation type and % ground-cover that usually reduce runoff, but that water infiltrates. Infiltration is important in increasing evapotranspiration over evaporation. The water that moves deep enough into the soil column under bare soil conditions isn't evaporated and is lost to interflow or recharge. Plant roots capture a significant amount of the infiltration so transpiration increases. The deeper the roots, the more infiltration that can be captured.

In addition to what has been (correctly) written in the other answers, I would like to add a couple of figures that could help to understand the dynamics involved:

The first figure is borrowed from this interesting paper 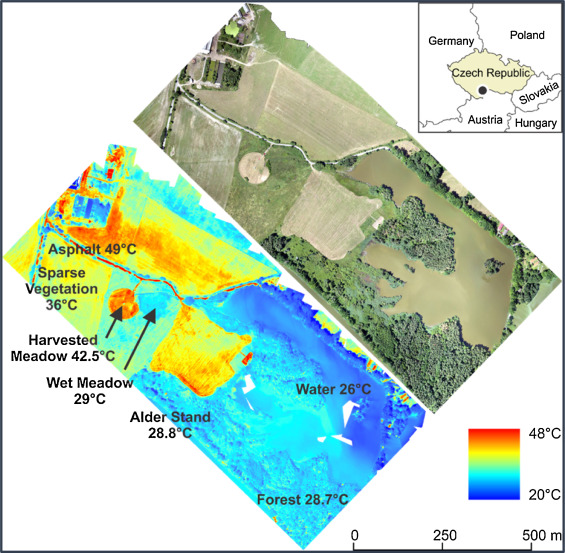 So, as you correctly guessed, bare lands are "hotter" than forested areas. But when you say "barren land faced greater heating and wind than vegetated area", I think you are a little mixing correlation and causality: if the surface is exposed to the same amount of radiations, then the difference in temperature is given by the land cover. The amount of the difference is given by a large number of factors, among which: radiations absorption (including color), topography, composition of the material (rocks, water, soil...), composition of the air surrounding the surface (don't forget that water vapor has a greenhouse effect), area exposed to the radiations, and so on. By the combination of all these variables, the presence of trees results, given the same exposure to solar radiations, in a lower temperature. It is curious to notice that in the figure, the fresher area is the pond... This is due to the thermal inertia of water bodies.

Maintaining the discussion on the forested areas, trees act as a "water pump": they take soil moisture from the soil and circulating it into their branches and leaves (see next figure). This means that they increase the amount of water available in the surface. Moreover, leaves act as a "surface multiplier", in the sense that they offer multiple small surfaces that captures the radiation. In addition, the presence of water transfer some of the heat in form of vapor. Basically, leaves do what a human body would do and control their thermal regulation, also by transpiring large amount of water (see this paper). The cooling effect of the different land cover also influences the winds by altering the convective heat transfer (so, wind is cause and consequence of the "freshness" at the same time). 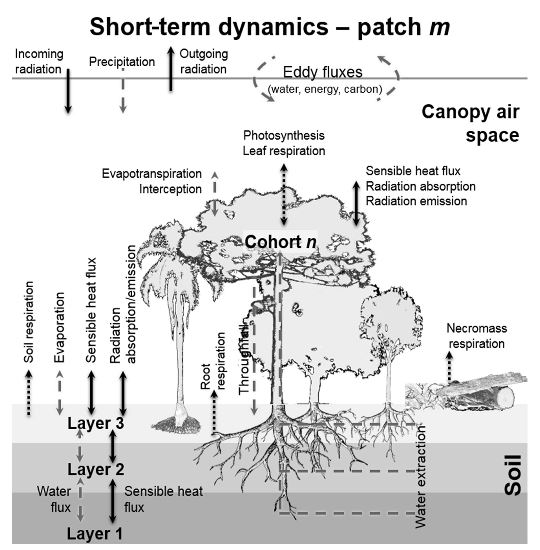 This figure is taken from Pereira et al. 2017 and its captions states "Schematic of the enthalpy fluxes (all arrows) and water fluxes (all but solid black arrows) that are solved in ED2. The schematic is based on Walko et al. (2000) and Medvigy et al. (2009). (Figure courtesy of Marcos Longo)."

In summary, (oversimplifying) the presence of trees increases the amount of water and the surface exposed to the radiations and this, jointly with many other physical and chemical processes, results in a larger moisture in the air and a larger dispersion of the heat (meaning that locally the forested system is fresher than the one without trees). Answering your question in the title: the presence of trees increases the moisture dispersion in the air. To give a better sense of the effect of the presence of vegetation on the water balance, see the picture below: 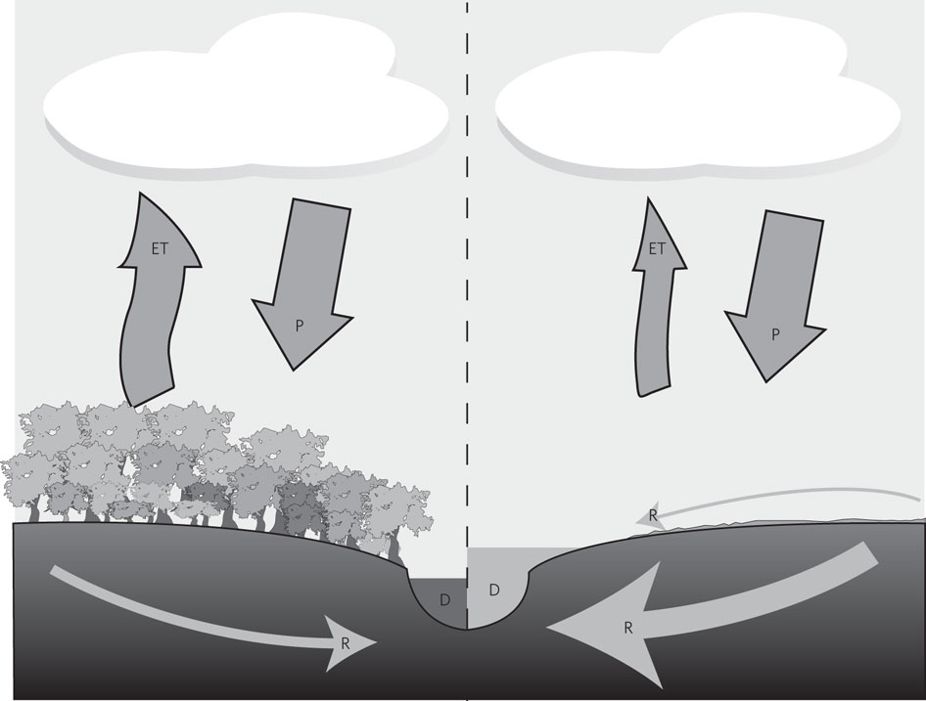 Not the answer you're looking for? Browse other questions tagged desert evaporation or ask your own question.