When diamonds "migrate" from deep underground to the surface, do they maintain pressure inside when there is no more pressure outside? If so, how?

From Science News' A mineral found in a diamond’s flaws contains the source of some of Earth’s heat:

A tiny bit of rock trapped inside a diamond is now opening a brand-new window into what the planet’s lower mantle looks like. Inside the diamond is a newly identified silicate mineral dubbed davemaoite that can only have formed in Earth’s lower mantle, researchers report November 12 in Science. It’s the first time that scientists have managed to definitively prove that this type of lower mantle mineral — previously just predicted from laboratory experiments — actually exists in nature. The team named the mineral for well-known experimental high-pressure geophysicist Ho-kwang (Dave) Mao (SN: 3/16/04)

Scientists had previously estimated that about 5 percent to 7 percent of the lower mantle must be made up of this mineral, Tschauner says. But it’s fiendishly difficult to directly observe such deep-Earth minerals. That’s because minerals that are stable in the intense pressures of the lower mantle — which extends all the way to 2,700 kilometers below Earth’s surface — begin to rearrange their crystal structures as soon as the pressure lets up.

Even the planet’s most common mineral, a lower mantle magnesium iron silicate known as bridgmanite, was largely theoretical until 2014, when it was discovered to have naturally occurred within a meteorite that had slammed into Australia with a force that generated crushing, deep mantle-like pressures in the rock (SN: 11/27/14). To date, bridgmanite is the only other high-pressure silicate mineral confirmed to exist in nature.

Diamonds act like time capsules, locking in the original mineral forms on their journey to the surface. The discovery of davemaoite is not only a confirmation of its existence, but it also reveals the location of some sources of heat deep inside Earth.... By identifying the chemical makeup of davemaoite, researchers can now confirm where those elements reside.

That’s because the Botswana diamond also contained a high-pressure form of ice as well as another high-pressure mineral known as wüstite (SN: 3/8/18). The presence of those inclusions helped narrow down the rough pressures at which the davemaoite might have formed: somewhere between 24 billion pascals and 35 billion pascals, Tschauner says. It’s hard to say exactly what depth that corresponds to, he adds. But the discovery directly links heat generation (the radioactive materials), the water cycle (the ice) and the carbon cycle (represented by the formation of the diamond itself), all in the deep mantle, Tschauner says.

From the article I think that I'm being told that the diamond is preserving enough pressure to keep both the "davemaoite" and " a high-pressure form of ice" and the wüstite stable as well.

Am I understanding this correctly?

Question: When diamonds "migrate" from deep underground to the surface, do they maintain pressure inside when there is no more pressure outside? If so, how? 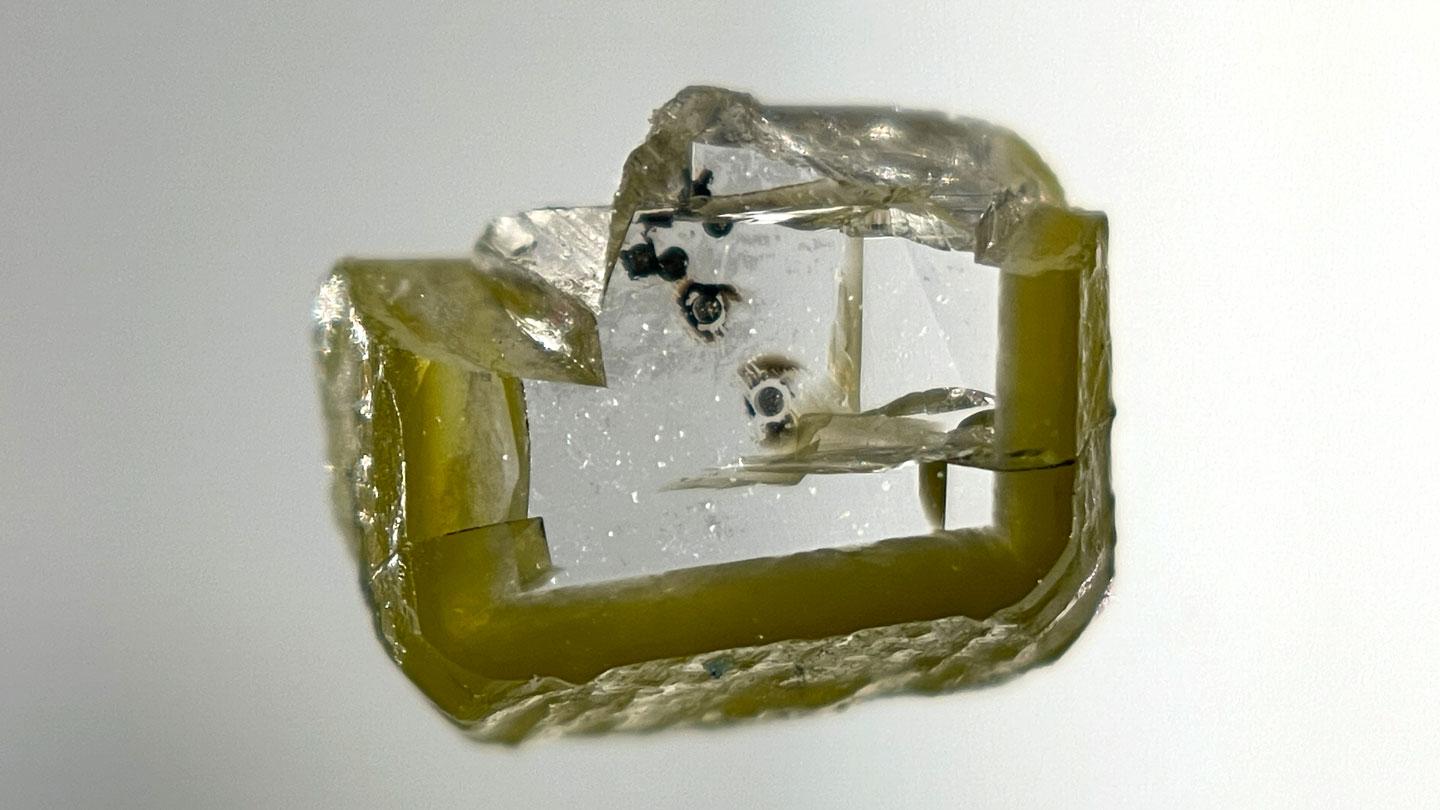 The tiny gray blobs of mineral embedded in this slice of clear diamond are the first samples of newly named davemaoite, a calcium silicate perovskite mineral that only forms in the lower mantle. AARON CELESTIAN/NATURAL HISTORY MUSEUM OF LOS ANGELES COUNTY

The question is in regard to pressure confining a rare, deep-mantle formed mineral visible within a diamond inclusion. The pressure on the inclusion within the diamond crystal is really the pressure of confinement within the crystalline lattice of carbon that makes a diamond what it is. Let's digress for a moment.

A diamond is a covalent crystal. Each carbon atom of a diamond crystal is bound to four equidistant carbon atoms tetrahedrally oriented about it, thereby forming a regular tetrahedron with a carbon atom at the center and one at each of four vertices, each atom sharing one electron in a covalent bond. This covalent crystal structure renders the diamond crystal as a single molecule. Among natural minerals, this covalent bonding also renders the diamond as extremely hard. Consequently, the crystalline structure is extraordinarily difficult to dislocate or shear, and will break, or fracture, as a consequence. This characteristic should be compared with the alternate crystalline form of carbon, namely, graphite. As we all know, graphite is extremely easy to shear and break. Without graphite, we would be without pencils.

Diamond crystals form at extraordinarily high temperatures and pressures deep within the earth's upper mantle. Nevertheless, the diamond crystal is unstable at temperatures and pressures where graphite is stable. The crystalline structure of diamond has unsatisfied bonding abilities on its crystal surface as the crystal-bonding elements there are not surrounded by other covalent bonding units. At the earth's surface, the crystal will reactively degenerate into graphite at a formidably slow rate, but will not readily oxidize unless by forced ignition. However, these extraordinarily strong covalent bonds result in an extremely high packing density of carbon atoms, and thereby also prevent the crystalline structure from alteration due to pressures existing where the crystal is unstable. Apparently there is little or no alteration in the dimensional stability of the crystalline structure of diamond due to changes in pressure. In other words, the dimensional stability of diamond is not sensitive to changes in pressure. Diamond cannot be compressed.

As we can see, some diamonds may have a history that is very interesting. In particular regarding the present question, the small inclusions of davemaoite crystals would not exist at the earth's surface if not for the confining pressure formed consequent to the diamond's crystalline lattice of densely packed, covalently-bound carbon atoms. Recall that the crystalline structure of diamond is extraordinarily difficult to dislocate or shear, and the packing of carbon atoms in the crystal lattice is extraordinarily dense. Consequently, each davemaoite inclusion was trapped within the diamond crystal as the crystalline lattice grew around the inclusion. The unique crystalline covalent bonding structure of the diamond, itself, confines the davemaoite crystals at extreme pressure.

Not the answer you're looking for? Browse other questions tagged mantle crystallography crystals pressure diamond or ask your own question.

6
Does Xenon really covalently bond to oxygen within quartz?
1
How to predict when the pressure will change
1
How do they get "deep lunar mantle" samples?