How reliable would measuring global heating from satellite be?

These points would be satellite resolution distance apart. This would provide an actual measure of global heating. We could subtract out the effects of cities and volcanoes by simply ignoring every value above a certain threshold. One example of such a threshold would be the average of all of the points for that day.

Would this be a reasonable way to double check the trend of global temperature anomalies?

Measuring long-term temperature trends from satellites is possible, but difficult due to a variety of reasons.

This is ongoing research.

In short: the satellites that have been around long enough were built for measuring weather, not climate, and the standards to which instruments need to be built to measure one are entirely different from the other.

We have had satellite measurements of the atmosphere since the 1960s, and operationally since the late 1970s. Those have always included infrared radiometer measurements, which means that, in principle, we can construct a record of surface (both land and sea) and atmospheric temperatures for the past 40 years at least. The sensors themselves aren't very complicated — but to determine a trend we would need to be very confident about their uncertainty, stability, and inter-satellite variability.

If you were to simply take 40 years of HIRS infrared measurements and plot them, you don't know if the changes are due to atmospheric or instrumental changes.

From 2015 to 2019, I was part of the FIDUCEO project which aimed to bring the science of metrology (science of measurement) to satellite observations. Taking 40 years of AVHRR (for sea surface temperature) or HIRS (for atmospheric temperature and humidity) measurements, with 16 different editions of the instrument over a period of 40 years. But AVHRR was built to look at pictures of clouds. If you look at pictures of clouds, the user doesn't care if one satellite has its pictures 0.5% brighter than the previous one. They just tweak their monitor a bit! But if you take the global climate system, then that corresponds to more than 1K temperature difference, which for the oceans, would be huge. In FIDUCEO, we aimed to:

Here are 40 years of HIRS (versions 2, 3, and 4), on which we tried to do some harmonisation. The top panel shows global average brightness temperature per 24-hour period, as measured by channel 2 which IIRC peaks somewhere in the stratosphere, so this would correspond roughly to an atmospheric temperature somewhere up in the stratosphere (which, incidentally, is cooling as the Earth's surface is warming): 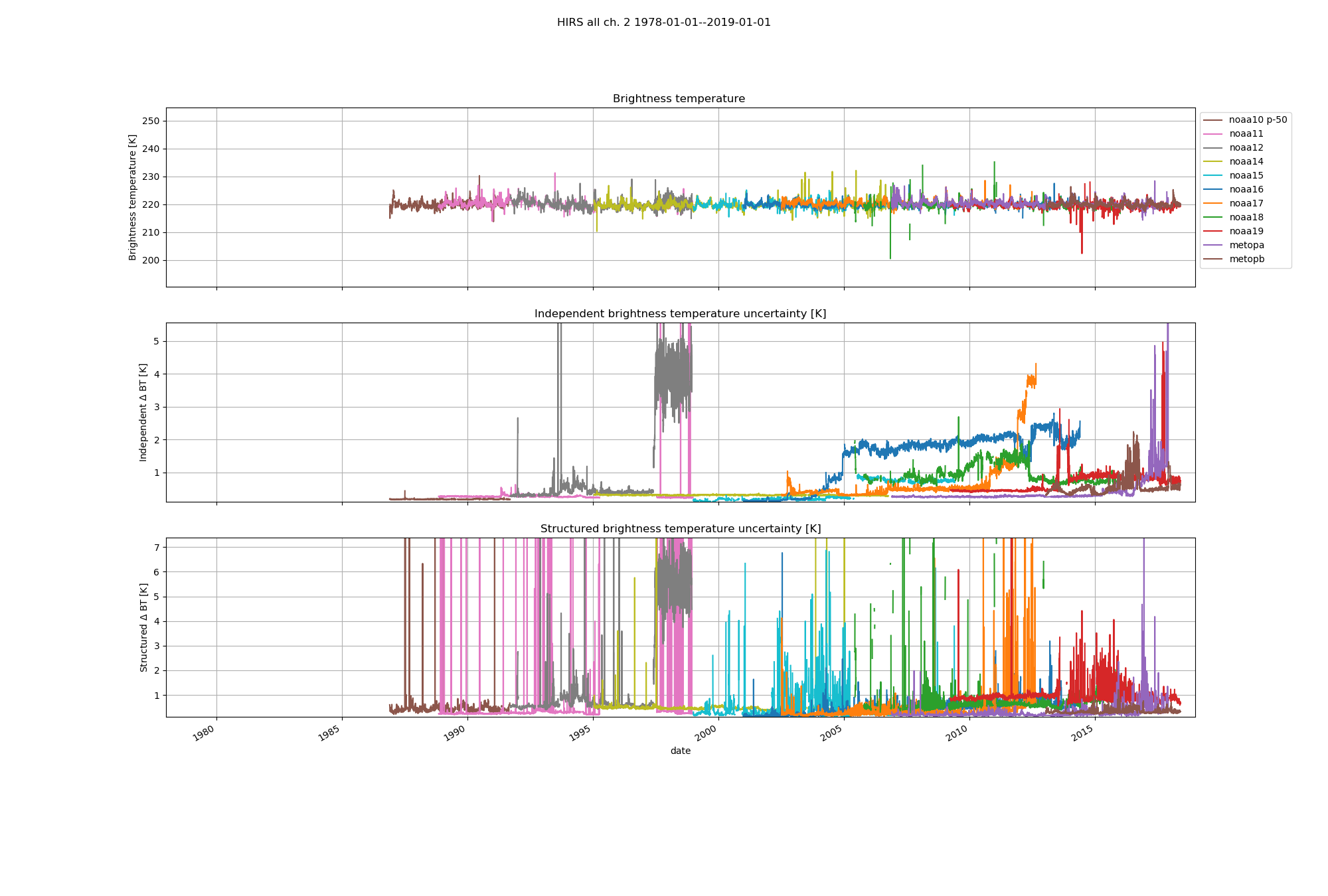 The different colours indicate different satellites. As you can see, there are both jumps between satellites, and trends within one satellite. Some of this is expected, as polar-orbiting sun-synchronous satellites have a drifting local equator crossing time, but some of it is due to instrumental problems. Some of those problems are captured by the structured uncertainty in the bottom panel, but not all of it. The data only go back to the mid-1980s, because before that, there weren't enough overlaps to constrain the differences between subsequent pairs of satellites based on simultaneous nadir overpasses (SNOs). For satellites in the early 1980s and late 1970s, the coefficients to calibration the thermometres measuring the temperature of the on-board calibration target appear to have been lost. For the earliest satellites the header data does not match available documentation. Software to produce this figure is on Github, raw source data are available from NOAA CLASS, some processed data from FIDUCEO.

This is for a global average. To do this regionally would add additional complications.

The CLARREO programme is proposed to be the first in-orbit SI reference for accurate calibration. Had we had that for the past 40 years, our job would be easier. But CLARREO is still waiting for funding.

So the answer to your question is: with what we have now — not good enough — yet.

But if you are contemplating a career in satellite techno-archeology, I recommend it. It's great fun.

You seem to conflate several things in your question.

First, AGH skeptics don't deny "climate change". They don't even deny that anthropogenic activity does have some impact on thermal balance of Earth. They just don't think this impact has any significance, since the same climate scientists already have established that CO2 was 10-fold higher in the Earth past, and no water-amplified "runaway" effects (aka "feedbacks") have lead to any terrible effects to life on Earth. It short, there was no "point of no return", historically speaking.

Second, you confuse "global change in average surface temperature" with "global heating". Since the Earth is round and suffers very different insolation levels (equatorial areas are hot and radiate back quite a lot, polar areas are cold and emit much less, all in proportion to 4-th degree of absolute temperature in accord with Stefan-Boltzmann law), it is easy to construct simple examples when lower "average temperature" leads to higher thermal emission, and higher average temperature leads to lower emission to outer space. In other words, there is no correlation between "average surface temperature" of the globe with global "radiative imbalance" (aka "global heating").

Therefore obtaining thermal images from distance might show ANY type of correlation with statistical averages of surface temperatures. And I don't even mention technical difficulties related to long-term stability and calibration of remote sensors, and with necessity to get these observations for at least 100 years to see any effect. And as I noted above, the effect can be anything and prove nothing.

55
How many trees would I have to plant to solve Global Warming?
34
How does anthropogenic heating affect global warming?
11
Relationship between natural disaster and global warming, in the media
22
“Five of the Solomon Islands disappeared” due to sea level rise, how is this possible so quickly?
2
How can we accurately quantify the degree of scientific certainty that global heating is caused by humans?
2
Are 60C heat waves predicted by 5C of global heating? (The worst consequence of global heating)
1
In a zero carbon future but with increasing energy requirements would Earths oceans continue heating?
2
How much pollution would it take to stop global warming?