Is it possible to actually stop climate change, or the only thing we can do is to slow it down?

When I was researching some materials (e.g. this article in Scientific American) regarding the possible ways to fight climate change, I noticed that almost all suggestions look not like the solutions to the problem, but rather the way to slow down the problem.

I mean, the efficient light bulb still emits some non-zero heat, doesn't it? Moreover, judging by the following picture (source) 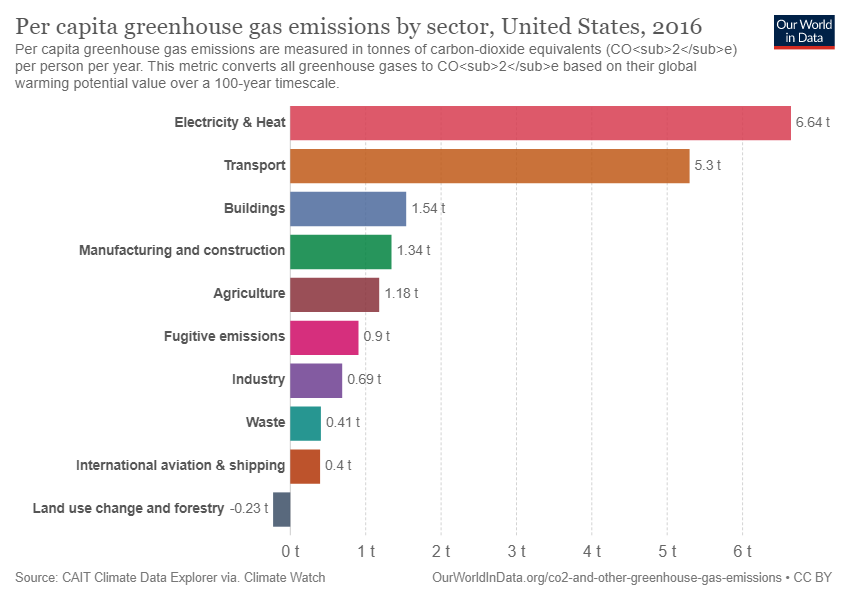 it seems that there are some sources of greenhouse gases that aren't going anywhere (we theoretically may make all cars electric but greenhouse-emitting agriculture will still remain).

In theory, one of the possible solutions is just to reduce the total population or significantly change lifestyle, but because, firstly, this is unrealistic and secondly, this is not the subject of this forum, let's just assume that both will remain roughly the same.

So, is the climate change inevitable (supposing that current population and lifestyle remains roughly the same), or am I missing something?

Yes, it is possible to reverse climate change, at least technically, and it does not require absurd technology to do so. (The political issues are entirely different and clearly off-topic, so I won't mention them further.)

First of all something you say indicates a possible confusion: you said

And the important thing here is that human energy production (which ends up as heat) is an absolutely negligible direct cause of climate change. It's possible to work out what it is but it's a tiny fraction of a degree. It's also possible that in some future world it may start to be a direct problem, but it is not currently. See Tom Murphy's excellent blog (and now free book!) for some calculations on this.

Climate change is not caused by waste heat from human energy use: it's caused by processes which modulate the energy which arrives on Earth from the Sun, which is hugely greater (I did a simple-minded calculation based on this page and got a figure of about $11500$ times more energy arriving at the top of the atmosphere from the Sun than human energy production).

Before starting, it's important to realise that there are natural processes which scavenge $\mathrm{CO_2}$ from the atmosphere as well as ones which produce it: the concentration doesn't just endlessly increase. Indeed the fossil fuels we are busily burning are the result of just such scavenging of $\mathrm{CO_2}$: all that carbon was removed from the atmosphere by organisms over geological time and turned into coal, oil etc. If such processes didn't exist we would simple not be here at all.

So to reduce the concentration of $\mathrm{CO_2}$ in the atmospere there are, really, two possible broad-brush approaches:

For (1) there are several things to say. Firstly I don't know what the level which would eventually be reached is: there's no reason to believe it will be the same as the preindustrial level I think (and obviously the $\mathrm{CO_2}$ level in the atmosphere is not long-term constant in any case: it just generally changes rather slowly over time compared to recent anthropogenic increase). Secondly, this would take a long time, just because the natural scavenging processes are generally slow: there is a summary here (from a few years ago), but the timescales are hundreds of years I think.

But one important thing about (1) is that 'a relatively small level' doesn't mean 'living in the 18th century': more than half of the total anthropogenic $\mathrm{CO_2}$ in the atmosphere has been put there since 1990. Life was reasonably pleasant in 1990 (although it helped a lot if you lived in the first world). [Edit following a comment. The previous statement is misleading: $\mathrm{CO_2}$ emissions need to be lower than they were in 1990 in the 1st world, and really quite a lot lower. But they don't need to be 18th-century low, and we don't need to live 18th-century lifestyles.]

To actually know what the options around (1) are you have to do hairy calculations which I'm not up to.

So planting trees (and other green plants, but trees are pretty good I think) are one way that humans can, in fact, actively pull $\mathrm{CO_2}$ out of the atmosphere over periods of tens of years.

There are also all sorts of other approaches including the more high-tech fixes that a lot of people enthuse about. For instance if we had unlimited very cheap power (say fusion which we'll likely have in due course, or cheap solar power which we already have) then it's easily possible to imagine a giant $\mathrm{CO_2}$-o-tron machine which will pull $\mathrm{CO_2}$ out of the atmosphere and turn it into, say, carbon and oxygen, driving the reaction backwards by pushing lots of energy into it. This will produce a bunch of waste heat, but see above on the contribution of waste heat to climate change.

There are a lot of other options here as well. I don't want to (and can't) enumerate them all. However I hope I have made the point that it certainly is the case that we can absolutely do things which would reduce the concentration of $\mathrm{CO_2}$ in the atmosphere over periods as short as tens of years, and many of those things are not absurdly implausible.

12
To stop anthropogenic climate change, is it necessary to stop extracting petroleum and start pumping carbon under ground?
10
Can volcanos change the climate?
1
Is it possible that we can reduce climate change given our current actions?
3
Educational book on science of climate change with action items?
0
In terms of the greenhouse effect, what is the Earth's heat capacity?
2
On what basics, can scientists predict the effects of climate change?
3
How do the slow and fast carbon cycles influence climate change?
1
What potential geoengineering technologies could help a country "achieve its Paris (agreement) targets"?
2
Looking for the mathematics so I can run climate change simulations